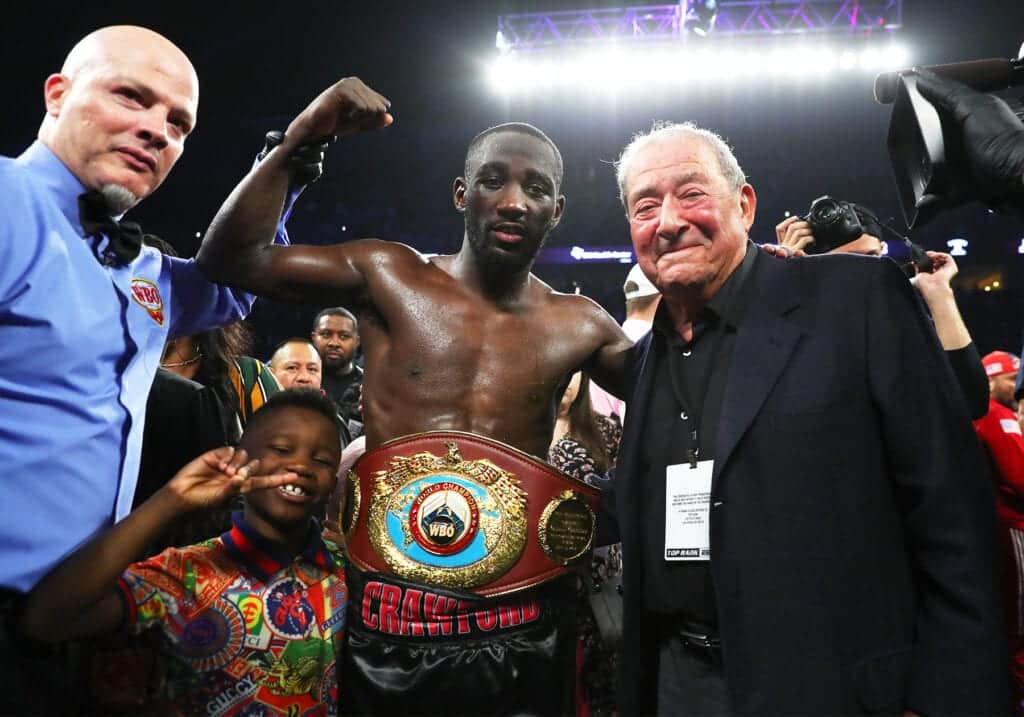 It’s drama outside of the ring on the latest edition of the “Big Fight Weekend Podcast.” This, as WBO World Welterweight champion Terence Crawford is suing former promoter, Bob Arum/Top Rank Boxing (happier times above) for monetary damages claiming “racial bias” against him among other charges. And, we are ready to go over all of it with a special guest joining us.

Host T.J. Rives welcomes Dan Lust of the Geragos Law Firm and the New York School of Law to give his expert insight into the unbeaten Crawford’s filing in Nevada in Civil Court. Isn’t Crawford’s real motivation here to get a hefty financial settlement? Lust, who also hosts his own “Conduct Detrimental” Podcast about sports law, also gets into the Bob Arum response and whether the case might be dismissed or not?

It’s definitely a sensational topic outside of the ring involving one of the top fighters in all of boxing.

Then, T.J. goes over the upcoming WBO World Light Heavyweight Title bout slated for Saturday night in Verona, NY, as Joe Smith Jr. defends his belt for the first time in a matchup against late replacement Steve Geffrard of Florida in the 12 round main event on ESPN. Will Smith, 27-3, 21 KOs score a quick KO or will Geffrard, 18-2, provide a challenge having taking the fight on 9 days notice after the previous opponent tested positive for Covid 19?

Also, the co feature fight on the Top Rank card in New York is Abraham ‘Super” Nova of Puerto Rico putting his 20-0 Featherweight record on the line vs. William Encarnacion in a scheduled 10 rounder.

T.J. has the odds and fight picks, as well.

Hear it all on “The Big Fight Weekend Podcast” and make sure to subscribe on Apple Podcasts, Spotify, Google, etc.!!