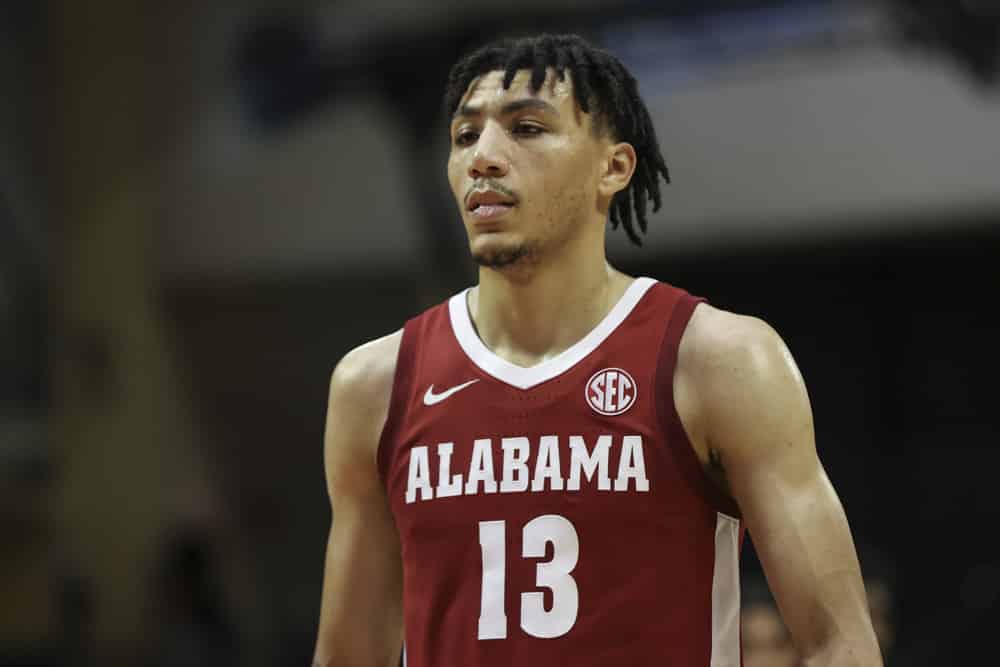 This isn’t a conference game obviously it’s a rare out-of-conference game in January. This game is part of the SEC vs Big 12 challenge and it shouldn’t disappoint. Baylor is the reigning National Champions and they look like they haven’t missed a beat despite losing a ton of their roster from last year. The Bears brought in big-time freshman Kendall Brown and an impact transfer from Arizona in James Akinjo but they have also done a great job of developing with LJ Cryer, Matthew Mayer, etc. Alabama has been up and down all year but they’ve scored huge wins against Gonzaga, Tennessee, & Houston so beating a top-tier team is something they certainly can do. The Crimson Tide success has been highlighted by great guard play from Jaden Shackelford, Jahvon Quinerly, & Keon Ellis. Tuscaloosa should be rocking for this one.

James Akinjo might have been the most impactful transfer in the portal this past offseason.

The Baylor PG had 20 points, 8 assists, and 4 boards to lead the Bears to their 15th straight win. pic.twitter.com/6GNNtTGJep

Coming into the season the Big Ten was supposed to be all about Purdue and Michigan but Wisconsin and Michigan State have been two of the better teams in the conference this year. The Badgers have been led by perhaps the most improved player in America and an early-season candidate for National Player Of The Year in Johnny Davis who is averaging 22 points per game and 7.4 rebounds. Michigan State has surprised as well with perhaps the most underappreciated team in America led by forwards Gabe Brown and Marcus Bingham Jr. who combined for 25 points per game and almost 13 boards. This is absolutely huge game within the conference for conference seeding in the Big Ten tournament and a chance at a Big Ten regular-season title. Johnny Davis and Wisconsin are some of the best stories in college basketball this year.

This is once again part of the SEC vs Big 12 challenge but regardless this is a huge game between two blue bloods that will probably be jockeying for position on seeding in the NCAA Tournament. The storyline in this game will probably be who will have the more efficient bigs between Kentucky’s Oscar Tshiebwe and Keion Brooks and Kansas’s David McCormack and Jalen Wilson. That matchup should probably dictate the games outcome. Then there’s the coaching side of it with Self vs Calapari with both coaches experienced in winning National Championships. The Jayhawks have won 4 straight at home against the Wildcats dating back to 1985. The last time these two met in 2016 Kansas won in overtime.

These are the two best teams in the Big East in my opinion. Xavier looks primed and I can’t remember a time that the Musketeers were this deep of a team. Xavier is led by a stable of guards led by Nate Johnson, Colby Jones and Paul Scruggs and they’re ready to make a deep March run. Villanova is a veteran team led by one of the nations best players in super senior Collin Gillespie and star guard Justin Moore and lets not forget that the Wildcats have a Hall Of Fame coach in Jay Wright. This game has major conference implications and the guard play should be amazing in this matchup.

The battle for the state of Indiana should be a dandy this year with Purdue being a top 10 team and Mike Woodson and Indiana appearing to take a step in the right direction. Woodson is no stranger to this rivalry for he played at Indiana for the legendary Bobby Knight. This game will certainly feature some of the best big men in the nation with Indiana’s Trayce Jackson-Davis and Race Thompson against the Boilermakers twin towers Zach Edey and Trevion Williams. Rivalry games are what make college sports so great and that makes this a must watch game.

I know its college basketball but still its Auburn and Alabama! The Iron Bowl on the hardwood is always fun and both these fan bases hate each other plus, both these teams are national contenders this year. Bruce Pearl vs Nate Oats could really develop into a great coaching rivalry. Will Alabama have an answer for the bigs of Auburn Jabari Smith and Walker Kessler? That could dictate who wins this matchup. This game will be amazing.

The first matchup was postponed because of covid and I know Juwan Howard and Michigan have been a disappointment so far this season but the Wolverines are super young and should be growing up as the season continues. Michigan State and Tom Izzo must be so sick of hearing all the buzz about Howard and the new Michigan Wolverines. This matchup should be another nice matchups between bigs with Hunter Dickinson and Marcus Bingham Jr. but the real question will be the growth of Michigan’s youth.

This SEC Conference game is about as gigantic as any conference game this season. You could make the case that the winner will have the inside track to winning the SEC regular season championship. Kentucky is just 2-3 in their last 5 against the Auburn Tigers so Bruce Pearl has been getting the best of John Calapari of late. The Oscar Tshiebwe vs Jabari Smith matchup is must watch tv as both were gigantic recruits for each program.

This is a big-time game between two teams that will be battling for a Big Ten Championship. It will also be fun to watch Kofi Cockburn go up against Zach Edey & Trevion Williams. Purdue has lost three in a row to the Fighting Illini so perhaps Matt Painter can get a gigantic road win in Champaign. The Big Ten provides some great college basketball games and is an opportunity to see some top talent before tournament time starts.

I know it’s not Duke vs Carolina but NC State vs North Carolina is always a great rivalry game to watch. Sure, the Tar Heels have won 8 of the last 10 matchups but they have lacked consistency all year in Hubert Davis‘s first year as head coach. NC State has been impressive considering their top player got out for the year before the season ever started. This is still one of the top rivalries in college basketball. NC State’s Dereon Seabron has been becoming one of the best players in the conference.

It’s a great football rivalry sure but both these teams are contenders in the SEC this year. Will Wade has the LSU Tigers ahead of scheduling and Nate Oats has Alabama basketball better than its ever been.

Ed Cooley and Providence have been one of the best surprises in college basketball this season but so are the Xavier Musketeers. This one could have the Big East regular-season championship on the line.

Yes, the battle of the city of San Francisco’s best college basketball team will take place here. Randy Bennett always does a great job with Saint Mary’s and Todd Golden is making a name for himself at San Francisco.

Both these teams have battled a ton of injuries early in the year but at the end of the day, these two rosters may be the two most talented in the Atlantic 10. This means we could have the top seed in the A-10 tournament on the line here.

We know the ACC as a conference is having a really down year but could this be a battle between the top two teams in the ACC? Coach K’s final tour should have the Blue Devils rolling as the top seed. Anytime Duke hosts a game it’s a good one and this will be one of the last games Coach K is at the helm for and he will always have top billing in college basketball.

The WCC is having one of its best years ever if not it’s best but it still seems like Gonzaga has a big step up on everybody. Mark Pope and BYU have been knocking on that door for a few years now but here’s an opportunity to send a message to the Zags.

USC is one of the last undefeated teams in college basketball and here they hit the road to take on a decent Colorado team that is capable of pulling off the big upset. Can USC survive the road test to Boulder?

Hubert Davis’ first season in Chapel Hill has been inconsistent but the Tar Heels could still find themselves as the top team in the ACC if they get it together. Steve Forbes has Wake Forest believing they can contend for an ACC Championship.

Texas has been a disappointment thus far this season but these are two schools on the verge of joining the SEC and bitter rivals breaking in two proven winners at head coach. Beard vs Moser? Sign me up for these matchups for years to come.