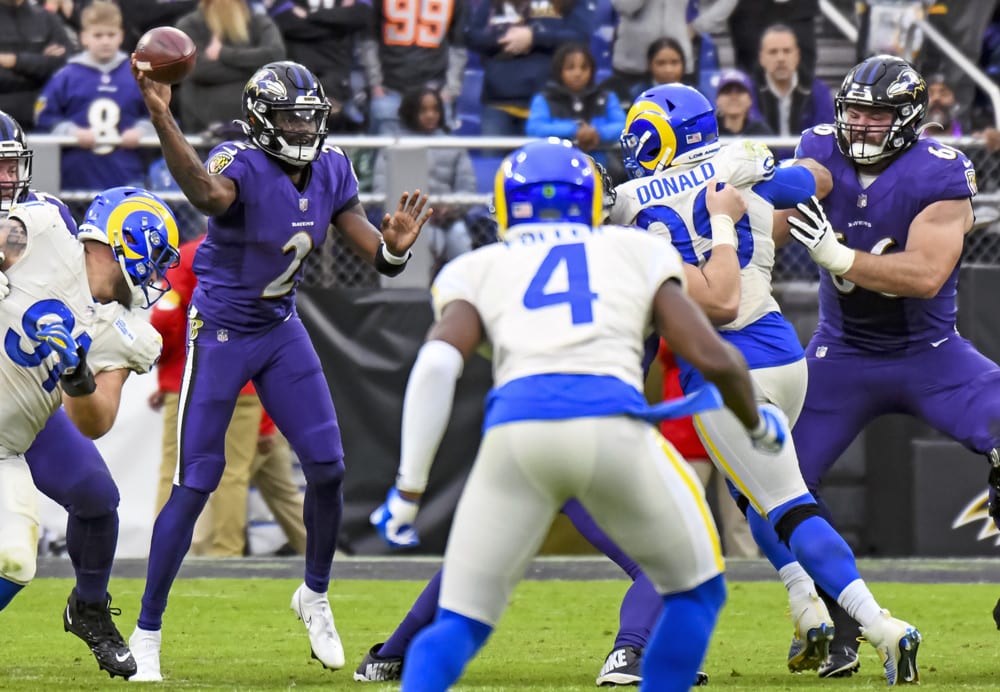 Welcome to the Top 10 DFS stacks article where I will be breaking down the DraftKings main slate to identify my top 10 DFS stacks for Week 18. Stacks in DFS can be defined as; playing two or players from the same team in a single lineup. Stacking in DFS contests has become the predominant roster construction strategy particularly for GPP tournaments, with a variety of unique and creative ways to build stacks and maximize your scoring upside each week. The most popular stacking options include the skinny stack, the double-stack, the run back stack, and the full-on game stack, and the running back paired with a defense stack.

The last time Josh Allen ($8,100) played the New York Jets, he scored 24.9 points in a one-sided victory. This week, RunTheSims.com projects Allen for the highest-ceiling on the Week 18 DraftKings main slate. Allen’s most dangerous and trustworthy wide receiver, Stefon Diggs ($7,800) has 42 targets in his last four games. The last time these two teams met, the Bills’ defense picked Mike White off four times. If they can turn Zach Wilson over a few times, Allen could see increased red zone opportunities in this matchup. Last week the Jets’ secondary gave up  55 fantasy points to wide receivers on 19 receptions for 245 yards and two touchdowns. I’m rolling with the Allen/Diggs stack in high-stakes GPP tournaments.

It’s looking more and more like Tyler Huntley ($5,700) will be under center again his week when the Ravens face off against the Steelers. Huntley did a great job moving the football against Aaron Donald and the LA Rams in Week 17. Huntley passed for 197 yards and added 54 on the ground. The offense struggled in the red zone and had to settle for field goals. Mark Andrews ($7,500) was kept out of the end-zone last week, but he did catch all six of his targets for 89 yards. With Diontae Johnson on the NFL’s COVID-19 list, fire up Chase Claypool this week at only $5,100. Claypool has not seen consistent volume this season but should see plenty of looks from Big Ben in this playoff birth matchup.

For the first time since 2015, we have a TE1 that isn't Travis Kelce! Mark Andrews' late-season surge gave him the top spot and his first TE1 finish of his career! Hell of a season for @Mandrews_81, who has a great career ahead of him! pic.twitter.com/DR7eyBEnu7

Cooper Kupp ($9,700) and Deebo Samuel ($8,500) are averaging 49.5 DraftKings points per game this year. It’s no secret that Matthew Stafford and Sean McVay both want Kupp to set records on Sunday. Kupp needs 11 catches to equal Michael Thomas‘ 149-receptions back in 2019 with the New Orleans Saints. Kupp also needs 135 receiving yards to tie Calvin Johnson‘s single-season record of 1,964 yards set in 2012. Both records are in play and if Kupp achieves them he should have a big day. Samuel makes the best leverage play if you want to run this game back. Kittle is $1,800 cheaper than Samuel and will be much more popular. I like this DFS Stack for Week 18 in Cash games and mid-sized GPP tournaments.

Justin Herbert ($7,100) looked great last week against the Denver Broncos, passing for 237 yards and two touchdowns. Great news for the Chargers and Herbert, Mike Williams, and Keenan Allen ($7,500) each had a touchdown reception. It was Allen’s fourth in the last four games. This week Herbert faces a Raiders team that he passed for three scores and zero picks against in Week 4. Allen saw 11 targets in that game but only turned his seven catches into 36 yards. I expect Allen to be able to put up better numbers in this matchup.

Hunter Renfrow ($6,600) has scored over 20 DraftKings points in four of the last six weeks. Darren Waller is practicing this week, but I still like Renfrow. His emergence as a red-zone target gives Derek Carr another threat down by the goal-line. A Renfrow run-back makes the most sense in smaller single-entry GPP contests.

Justin Herbert is ridiculous. Runs away from the free runner and pins a sideline throw without breaking stride. pic.twitter.com/2mh99JHih5

Field Yates is spot on! Kyler Murray ($7,400) is finally healthy and back to terrorizing defenses in and out of the pocket. I love Murray’s matchup this week against a Seattle Seahawks team that is seeing him for the first time this season. Murray will be without DeAndre Hopkins and possibly Chase Edmonds but should be getting back workhorse back, James Conner $6,300. Christian Kirk has emerged as Murray’s favorite target without Hopkins and is a great value at only $6,000. Kirk has been averaging 10 targets per game the last three weeks.

D.K. Metcalf is priced up this week after exploding for three touchdowns. Lockett is $500 cheaper this week at $6,400 and allows you more flexibility when constructing a Cardinals/Seahawks game stack. If Edmonds plays, I’m dropping Conner from this game stack.

Kyler Murray's 4 best rushing games of the season have come in the 5 games since he got back from injury. That bodes well for Arizona's playoff outlook. pic.twitter.com/xh6FUXr2pz

Jonathan Taylor ($9,300) is over 200 yards away from 2,000 rushing yards on the season. He’s 266 away exactly, and he could very well end up rushing for it this week in Jacksonville. The Jaguars’ franchise is currently a hot mess. I know. When is it not, right? Well, this week the Duval faithful are planning on dressing up as clowns to mock their owner Shahid Khan. Despite the Jags’ recent success at home against the Colts, winning their last six, this is not going to be their week. I’m loading up my Cash games and my GPP tournaments with JT this week. He’s got slate-breaking potential and upside for days. The Colts defense leads the NFL with 33 takeaways this season. I’m banking on a defense score in this juicy matchup with turnover machine Trevor Lawrence.

Most games with 100+ rushing yards

Tom Brady ($7,500) really is the GOAT. Last week. No, Chris Godwin. No, Antonio Brown. No, Leonard Fournette. No, Problem. Brady still passed for over 400 yards and three touchdowns. This week Brady gets a healthy Mike Evans ($7,100) and a chance to add to his NFL leading 40 passing touchdowns. Evans is Brady’s best and only reliable wide receiver on the team. I expect him to be drowned in targets. Robby Anderson is looking iffy for the game, making D.J. Moore’s $5,800 price tag one of the best values on the slate. I’m rolling this DFS Stack for Week 18 out in mid-range and larger GPP tournaments.

Is Tom Brady the MVP? pic.twitter.com/7GEufUnhoL

A.J. Brown ($7,000) disappointed last week, only scoring 6.1 DraftKings points. It was quite the letdown after going nuclear in Week 16, scoring 34.5 against San Francisco. This week Brown has one of the best cornerback matchups according to PFF. I’ve already documented in previous weeks how terrible Terrance Mitchell has played this season. I expect Brown to score at least once in this matchup. Brandin Cooks ($6,300) makes for a perfect skinny wide receiver run-back stack to pair with Brown. I don’t need to list all the reasons to play Cooks in this spot. It’s Week 18 people, if you don’t know to play Cooks every week, I can’t help you. This stack is live in all Cash games and in single-entry GPP tournaments.

Taysom Hill is only $6,300 and is facing a Falcons defense that ranks 30th against quarterbacks. They have given up 32 total touchdowns. They rank 24th against running backs, having given up 2,200 total yards and 17 touchdowns (remember we want touchdowns). The Falcons rank 27th in scoring, managing only 18.3 points per game. The Saints defense on the other hand ranks second against running backs and sixth against quarterbacks. Matt Ryan played well against the Saints in Week 9, but look for the Saints to bring more pressure this go-round.  The Saints onslaught can be modified to include Kyle Pitts if he suits up on Sunday.

Taysom hill has averaged 206 passing yards and 57 rushing yards in his 8 starts at QB, for a total of 263 total yards

But he isn't a good QB, right?

Darnell Mooney ($5,800) had 13 targets last week. He scored 19.9 DraftKings points. It does not matter who the quarterback is, Darnell Mooney is the best receiving weapon the Bears have this season. Mooney has 10 games with over 10 DraftKings points. That’s remarkable given the revolving door at quarterback all year. The Minnesota Vikings are the worst team in the NFL against wide receivers, having given up over 3,000 receiving yards and 21 total touchdowns. There hasn’t been this much scoring since the infamous Vikings Love Boat.

The Bears have not been terrible against the run, but have given up over 2,100 total yards. Dalvin Cook ($7,800) rushed for 89 yards in Week 15 but failed to find the end-zone. The Vikings may or may not have Kirk Cousins under center this week, meaning that Cook will more than likely be the focal point of Mike Zimmer’s offensive attack. I’m playing this skinny run-back DFS Stack for Week 18 in large field GPP tournaments.