What’s the Next Job for Urban Meyer: Future Job Opportunities and Landing Spots 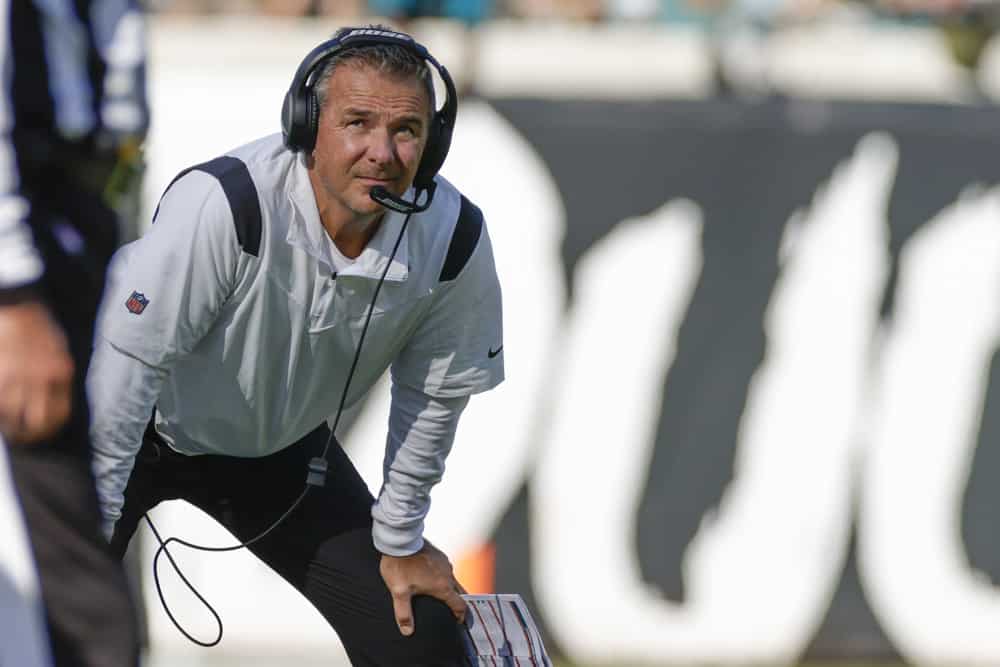 What’s the Next Job for Urban Meyer: Future Job Opportunities and Landing Spots

Out of everyone in the football world, Urban Meyer might just be the happiest to see the year 2021 pass him by. In case you’ve been living under a rock, let’s take a brief look at the mess Urban has created for himself… or as he would likely put it, what others have put him through. What will Urban Meyer do for his next job? Could he join the ranks of the coaches joining the USFL? Get another NFL gig? Or is it back to the collegiate ranks or even retirement?

What’s the Next Job for Urban Meyer? Future Job Opportunities and Landing Spots

How we got here

After reading that laundry list you’re probably thinking one thing: why do people keep doing this to Urban? People just don’t want to see this guy win and that’s why everywhere he goes, scandal follows (obviously kidding). Well, now that we’ve aired out Urban’s glorious resume, let’s dive into some places that just might be lucky enough to have it come across their desk this year.

This is by far the most unlikely option. I cannot imagine any coach wanting to hire Meyer after the trainwreck of a season which he just had. It was made evident pretty early on that Urban didn’t know that he couldn’t treat grown men who are making millions like 18-22-year-old college kids. The only capacity which I could see this potentially working would be in some form of scouting position but I’d be pretty confident in saying a head coaching job isn’t happening, given who else is out there. If it did, why not the Raiders? It just feels right.

Urban Heads to the USFL

For those who haven’t seen the USFL is making a comeback this Spring. And, for a league trying to get off the ground again, any publicity is good publicity. Hiring Urban Meyer to coach in some capacity would definitely make headlines and that’s something the league is likely looking for. While the league can likely look past Urban’s shady past, the question is would Urban do it? For me, my biggest question is will his ego allow it? I think Urban is the kind of guy who always needs to be in the spotlight and let’s face it, the lights aren’t quite as bright in the USFL as the NFL or Ohio State.

In terms of a landing spot in the USFL, given the list of teams, it could be fun if the former Ohio State man took his talents to Michigan to coach the Panthers. If not them, the Stallions seem perfect, given Urban’s experience with kicking. The USFL will need coaches and next year the XFL will too. Urban could take a different kind of path to rehabbing is image through spring football.

No more… No more football. pic.twitter.com/wKyAQaYqGc

Urban Goes Back to School

Maybe, just maybe if Nebraska is desperate enough they could give him a call if they ever move on from Scott Frost. In terms of other options, maybe he’d look to start from scratch and build his own thing. Nothing would cement an egomaniac’s legacy like turning Vanderbilt into an SEC contender. Finally, maybe we see FAU land another big fish, and Urban steps into Lane Kiffin’s former office.

*assuming all the jobs were open*

Urban is Back on Air

For those who remember, Urban previously worked on Fox Big Noon Kickoff Pregame Show, so why not go back? He might not be the best person from a character standpoint but Urban does know a great deal about the college game and might want to come back and share his wealth of knowledge with viewers. When referring to his past, FOX did hire Pete Rose in 2015 who is blackballed by the MLB so maybe they can get past when Urban has done.

Urban Goes Back to Florida

No, not Gainesville to coach the Gators. I was thinking more along the lines of Palm Springs, Naples, or Jupiter where he can spend the rest of his days golfing and trying to fix what likely is a shaky marriage.

Happy Trails Urban Meyer, enjoy retirement (probably) or don’t, I don’t really care what your next job is.