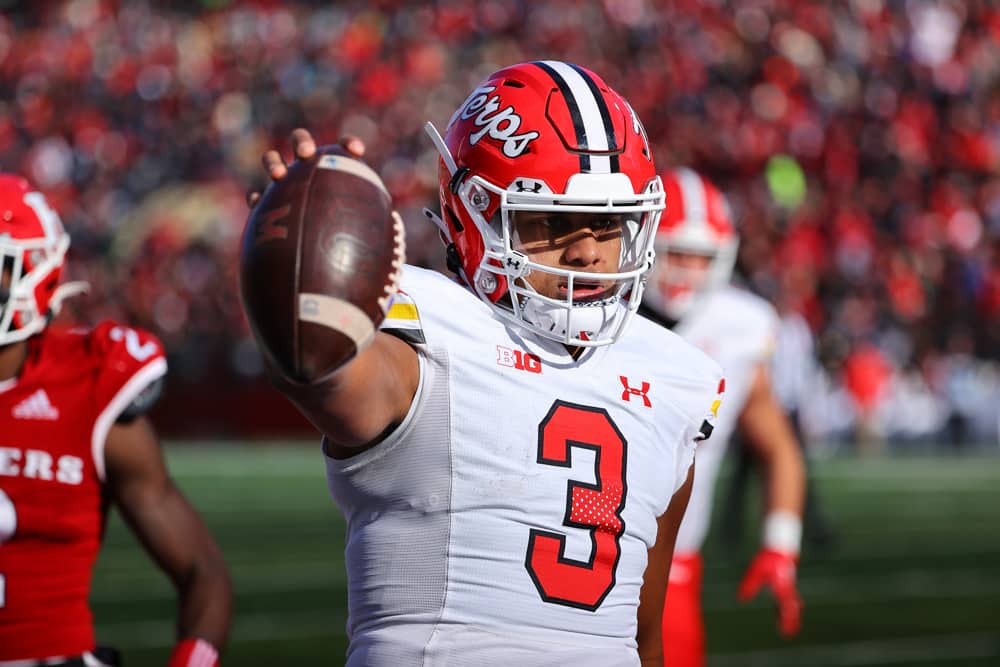 What a wacky bowl season it’s been so far. As I’m writing this on Tuesday, December 28th, I’m just hoping that no more games get canceled due to COVID. We need our College Football Bowl Games!  Assuming no other cancellations, here are my previews and picks for the games leading up to New Year’s Eve and the College Football Playoff.

Both teams enter the bowl game with disappointing 6-6 records. The Terrapins started the season 4-0 before dropping six of their last eight games. However, a blowout victory over Rutgers in the final week gave HC Mike Locksley his first bowl appearance of his 5+ year head coaching career. He’s still just 12-23 in three years at Maryland and in general, the “Fade Locksley” approach has been good to bettors.

As for the Hokies, a big opening week win over UNC offered fans glimpses of hope. A three-game skid in early October squashed any optimism and HC Justin Fuente was relieved of his duties a few weeks later. Much like Maryland, the season was somewhat salvaged in the final week with a 29-24 victory over Virginia.

The Terps enter the bowl game with basically their roster and coaching staff intact. Several players have hit the transfer portal but none were starters. Maryland will definitely have the advantage at QB where Taulia Tagovailoa is an experienced dual-threat signal caller.

Other than committing too many turnovers, the offense has been a bright spot averaging over 300 yards passing per game. Conversely, the defense has been a liability, finishing only 93rd best in the country. As you’d expect from a poorly coached team, the Terps were also penalized second-most in the Big 10.

Virginia Tech was able to respond to interim HC JC Price for the UVA game but there’s been a mass exodus of players since. Five starters have decided to enter the NFL draft and have opted out of the bowl game. Additionally, starting QB Braxton Burmiester, WR Tayvion Robinson and a handful of others have already transferred. This will especially affect an offense that only ranked 90th in the country and that was with their starters.

I’m not too fond of betting on Locksley and Maryland but I’m not sure how you back the Hokies given their current situation. I’ll lean towards the side of more returning players and the better QB. Va Tech won’t be able to keep up offensively and Maryland will pull away for the W.

For most programs, a 9-3 record is an excellent season. For Clemson, it was a major disappointment. Life without Trevor Lawrence, Travis Etienne and others proved challenging and the Tigers finished the season with only the 90th ranked offense in America. Through the first half of the year, Clemson failed to score over 20 points vs an FBS team in regulation.

Perhaps it was the schedule lightening up or the offense beginning to click, but the unit made strides towards the end of the season scoring 30 or more in the last five games. As most know, OC Tony Elliott is now the HC at UVA and DC Brett Venables is now the HC at Oklahoma. Of course, Dabo returns and most of the roster is intact for the bowl games but losing both coordinators stings.

Iowa State and Clemson both enter the game with top 10 defenses. Clemson is especially stingy vs the run and the Cyclones usually like to dictate pace with a strong ground game. To make matters worse for ISU, RB Breece Hall is going pro and will not be playing. Additionally, Iowa State will be without its top two WRs. Brock Purdy is a solid QB but his lack of weapons is concerning.

This is a bad matchup for the short-handed Iowa State offense. After an underwhelming regular season, Dabo and crew will be eager to prove they still belong among the top tier of college football teams. They’ll take care of business in Orlando with a convincing win.

Well, this game is a total crapshoot. You may have heard that both Oklahoma and Oregon will have new head coaches come 2022 so it’s all about the interim guys here. At least at Oregon, minus Cristobal, the staff will remain together for the bowl game. At Oklahoma, Lincoln Riley has already brought several assistants with him to USC and others have already departed and will not be present in San Antonio.

As for the players, it’s been reported that the Ducks will be without at least 30 scholarship players due to opt-outs, transfers, injuries, etc. At least they will have QB Anthony Brown, RB Travis Dye, and most of their offensive line. The Sooners are basically in the same boat, especially being hit hard on the defensive side of the ball. QB Caleb Williams, RB Kennedy Brooks, and some of the WR unit will play.

With the rosters and coaching staffs being drastically different from 30 days ago, there’s not much to break down here. Oregon should have enough success running the ball to keep the game close and in a matchup with so many question marks, seven points is too much. Give me the Ducks and the Over.

While the battle of the Carolinas pits two 6-6 teams together, UNC and South Carolina enter the matchup from two different perspectives. For the Gamecocks, in year one under HC Shane Beamer, a 500 record and a bowl berth should be looked at as a successful season especially on the heels of a 2-8 2020. On the other hand, UNC was supposed to win double-digit games and contend for the ACC championship. They cannot be pleased with an appearance in the Duke’s Mayo Bowl.

In a somewhat surprising move, QB Sam Howell will play for the Tar Heels which is obviously huge. SC has Spencer Rattler coming in next season, but it will have to be Zeb Noland at QB on Wednesday since Jason Brown has hit the portal. The Gamecocks will also be without their leading rusher and best defensive player who have opted out in order to prepare for the draft.

This matchup comes down to a really bad South Carolina offense (116th in the nation) vs an almost equally bad UNC defense (87th in the nation). Sam Howell, RB Ty Chandler, WR Josh Downs, and company are going to score some points for the Tar Heels. Expect at least 30. The question is if the SC offense can get into the mid-20s.

It’s all about motivation. South Carolina is trending upward and should be pumped to be in Charlotte for this bowl. UNC is getting a shot in the arm with Howell deciding to play but the team has to be disappointed with how the season unfolded. I don’t feel great about it but for that reason alone, I’ll take the points. UNC wins 31-23.

We should have a fun one in Nashville. The Vols, in year one under HC Josh Heupel, exceeded expectations and finished the season at 7-5. The team progressed as the year went on and all of their losses were to quality opponents. They dropped road games to Florida and Alabama, lost home games to Ole Miss and Georgia, and came away with an L in an out-of-conference game vs Pitt. Overall, I was impressed with Tennessee this season.

Purdue had a fine year themselves, winning eight games for the first time since 2006. The offense took off when QB Aidan O’Connell was named the starter early in the season. The Boilermakers finished as the 8th best passing offense in the country, throwing for 340+ yards per game. Unfortunately, star WR David Bell (93-1286-6) is going pro and opting out of this game.

With the exception of RB Tiyon Evans, who has hit the transfer portal, Tennessee’s roster remains intact for the bowl game. Their offense also exploded when VT-transfer Hendon Hooker was handed the reins early in the season. Hooker threw for 2,500+ yards with 26 TDs to just 3 INTs while also rushing for 561 yards and 5 TDs. Expect a big game from the Greensboro, NC native.

The one area where the Vols struggled this season was defending the pass, allowing over 250 YPG (103rd in the country). Going up against a prolific passing attack isn’t a great matchup but the loss of David Bell is critical. Purdue has some other playmakers like Milton Wright and Jackson Anthrop but so much of their success has to be attributed to the attention Bell demanded from defenses. Purdue also basically goes without a run game – only rushing for 83.5 YPG which ranks 127th in the country.

This will be a high-scoring affair but I like Tennessee to come out on top by at least a TD. Give me the Volunteers and the Over with a score somewhere near 38-30.

Unfortunately for the Peach Bowl, this matchup will be all about who isn’t playing. Pitt QB and Heisman Trophy finalist Kenny Pickett is going pro and skipping the game. The Panthers will also be without WR Taysir Mack and CB Damarri Mathis and Offensive Coordinator Mark Whipple has taken the same job at Nebraska amid rumors of a fallout with HC Pat Narduzzi. For MSU, the losses aren’t as widespread but star RB Kenneth Walker III is opting out and going pro.

Obviously, the Pitt offense will look a lot different without the Whipple-Pickett combo. Pickett missed a couple games with an injury last year and Pitt struggled mightily losing to Miami 31-19 and Notre Dame 45-3. If the offense isn’t firing on all cylinders at least the defense is solid finishing 38th best in the country and 6th best vs. the run.

Losing KWIII obviously hurts but RBs are usually easier to make up for. MSU QB Payton Thorne had a nice campaign, throwing for over 2,800 yards and 24 TDs with 9 INTs. WR Jalen Nailor missed the last few games with an injury and his status is uncertain but Jayden Reed and Tre Mosley form a solid combo at wideout. It will most likely be RB Jordon Simmons getting most of the carries in Walker’s absence.

I can’t put good money behind a Pitt team with so many questions on the offensive side of the ball. Simply put, the 10-2 Spartans have less unknowns and I expect them to win a tight game in the 20’s. Give me MSU and the Under

Thursday’s nightcap is a battle between two 8-4 teams who both had somewhat disappointing seasons. Wisconsin and Arizona State both had sights set on conference championships and that never materialized for either.

While the Badgers led the nation in total defense, a bad offense crippled by poor QB play forced a 1-3 start to the season. The offense made some strides during the year but Wisky couldn’t dig themselves out from the early-season hole. QB Graham Mertz threw for over 1,800 yards but just had 9 TD’s compared to 10 INTs and finished with a 58.7 completion percentage.

The lone offensive bright spot during the stretch run was Freshman RB Braelon Allen. Stuck down deep on the depth chart, Allen didn’t get double digits carries until the Illinois game on 10/9. He then ran for over 100 yards in seven straight contests. Trying to limit Allen’s effectiveness is a stingy ASU defense that finished 18th best in the nation and 32nd vs the run.

The Sun Devils will be without their two main RB’s (one went pro and the other is transferring) and three defensive starters. At this point, it appears the Badgers will only be missing one starter, S Collin Wilder who will be out with an injury. Both coaching staffs remain intact.

Nobody runs the ball vs Wisconsin and that especially rings true for a team without its best two tailbacks. Wisconsin DC Jim Leonhard will make the ASU offense one-dimensional and while Jayden Daniels is a fine QB, I’d expect a critical turnover or two. I like Wisconsin to take down Arizona State and get the cover in the process. Badgers win 24-13.