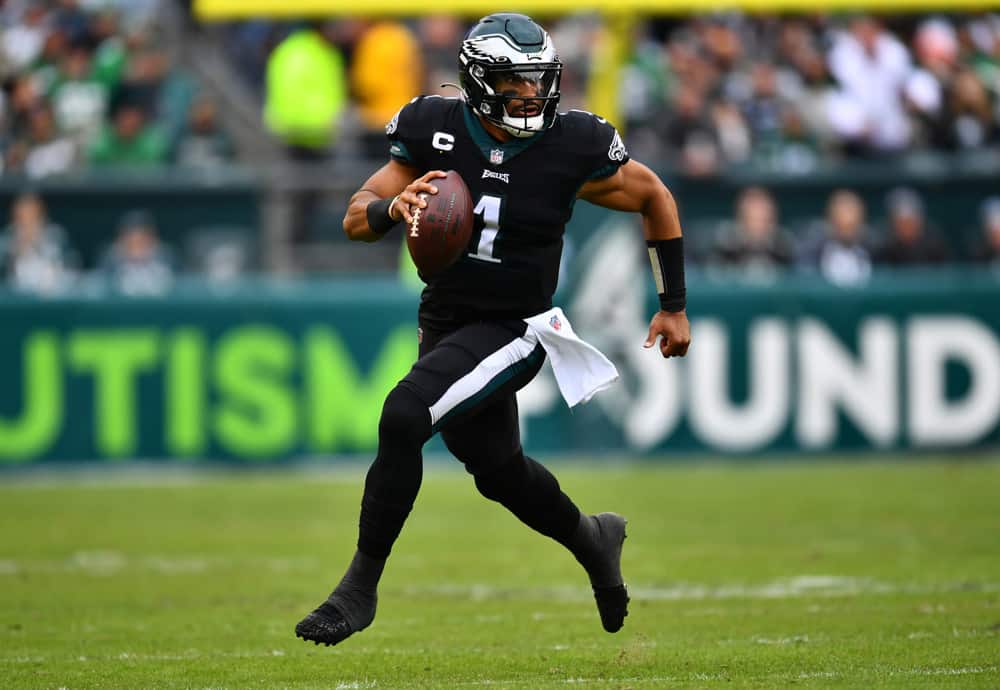 Well, I took it on the chin yesterday after an ugly game between the Vikings and the Bears on Monday Night Football. However, as a rarity, we get two NFL football games tonight! I can redeem myself tonight with two games on the schedule. First, the NFC West matchup between the Seattle Seahawks and the Los Angeles Rams. There is also an NFC East showdown between the Philadelphia Eagles and the Washington Football Team. Let me give you my three NFL Tuesday Night player props for the games tonight!

Jalen Hurts has been one of the best if not the best rushing quarterback this season in the NFL. In fact, Hurts exceeded 45 or more rushing yards in 9 of the 12 games he has started including six straight games. Furthermore, in three out of the last four games, Hurts had double-digit rush attempts which propelled him to exceed 45 rushing yards in each of those games. Additionally, the Washington Football Team has allowed the sixth-most rushing yards to opposing quarterbacks this season. I love this as one of my Tuesday Night Player Props to go over the total!

Van Jefferson has filled the void that Robert Woods left very nicely for the Rams. Jefferson has come a great down the field threat in the passing game for the Rams and the numbers are reflecting that. In fact, Jefferson has long receptions of 33, 79, and 52 in three out of the last four weeks. On top of that, Jefferson is averaging close to four receptions per game on an average of eight targets. I expect the same production tonight from Jefferson against the Seahawks secondary in my player props!

Matt Gay has been stellar for the Rams kicking the football to say the least. As a matter of fact, Gay is a perfect 12 for 12 from 30-39 yard range for the Rams. Furthermore, he is also a perfect 3-3 from beyond 50 yards including hitting one last week against the Arizona Cardinals. Additionally, Gay has recorded eight or more points in three straight games for the Rams including double digits in the last two weeks. In a matchup against the Seahawks earlier this season, Gay notched eight games in that game as well.