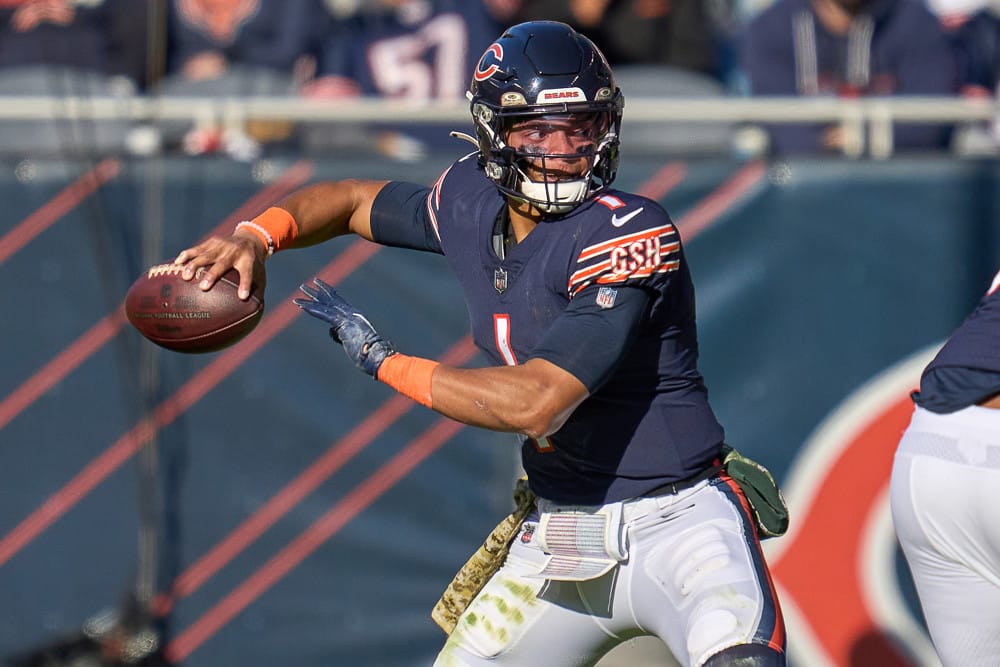 Well, here we are. The most important week of the season, the first round of the playoffs (or possibly the last week of the season for some leagues. The waiver wire has never been more important than it is now and everyone is in must-win mode. With that said, let’s dive into the top Fantasy Streamers that can help your team jump out to an early lead in a two-game format or get you the win.

Justin Fields is a guy who I was pretty high on this year heading into the season. While he hasn’t necessarily been setting the world on fire this year, he is heading into a favorable matchup. The Bears have the Vikings on deck on Monday Night Football, who have been allowing the 4th most Fantasy PPG against QBs (19.1). This mainly comes down to the fact that they have a pretty abysmal secondary, allowing 251 passing yards per game. On top of a favorable matchup, it’s hard to not consider Fields coming off a game where he threw for 224 yards and ran for 74. Consider Fields one of the top Week 15 Streamers at the QB position.

Our next QB is coming off of two straight games where he has thrown for 295+ yards. On top of that Jimmy Garoppolo is set to face off against the Falcons who are averaging 20.6 QB Fantasy PPG and nearly 250 passing YPG allowed. On top of these stats about the Falcons defense, another one that jumps out is that they’re averaging 2.0 passing touchdowns per game. Garoppolo has the weapons to make me feel pretty confident that he can exceed 15 fantasy points, something he’s done in 6 of his last 7 games.

Next up is not an option that will immediately catch eyes. Matt Ryan is certainly not the QB he once was, but that doesn’t mean he has no value when it comes to fantasy. This play on Ryan comes down to his opposing defense, the same as the first two. The Niners, like the Falcons and Vikings, come in near the top in Fantasy Points allowed per game to QBs (18.5). While they’re allowing a decent amount of fantasy points, this Niners defense is no joke. However, they’re averaging 6.6 passing yards per attempt. In all honesty, Ryan is not a guy I love this week but it’s not a very deep week in terms of streamers, so he does possess some value.

The Browns unfortunately are dealing with a ton of COVID issues this week. It seems like a lot of guys’ statuses are up in the air including Austin Hooper. Hooper is currently on the COVID list and it seems like barring a change in his status he will be out on Sunday. That brings us to David Nkoju. He’s had a few big games this year and one might be on the horizon. This week the Browns have the Raiders, who are allowing the second most Fantasy points per game to tight ends at 10.5 PPG. On top of that, they’ve allowed 9 touchdowns this far to tight ends. Whether it’s Hooper or Njoku I’d expect a big day out of the Browns TE.

Many people have likely forgotten about O’Shaughnessy as Dan Arnold was the Jacksonville TE1 for most of the season. However, in the 5 games he has played in he’s received 26 targets. This volume alone makes O’Shaughnessy a potential streamer for this week. On top of the volume, he’s facing off against a team, the Texans who are allowing 8.8 fantasy points per game. While the offense might look a little with Urban Meyer’s firing, I would still be willing to put stock into the Jacksonville TE this week with Dan Arnold on IR. O’Shaughnessy could be one of the better steals among the Week 15 streamers.

Again we have two guys whose teams are playing each other this week, bringing us to Brevin Jordan. Jordan has flown under the radar this year but is having a pretty decent season. He’s received 23 targets in 6 games and on top of that has caught 3 touchdowns. One problem for Jordan this year has been consistency, like most tight ends. If you’re looking to start Jordan it likely comes with the caveat that he is touchdown dependent. He wouldn’t be my first choice this week but if you’re desperate Jordan is a boom or bust candidate.

Our first defense this week is the Philadelphia Eagles. The Eagles have a home matchup against the Football Team, who will be led by a banged-up Taylor Heincke. Additionally, Washington could be without star WR Terry McLaurin who is currently questionable with a concussion. As for the Eagles’ Defense, they’re averaging a little over 1 takeaway and 1.5 sacks per game which doesn’t necessarily jump off the page. Yet there is room for promise as the Washington offense is in the top ten for both sacks allowed and giveaways. This game should be an old-fashioned, low-scoring NFC East slugfest making the Eagles Defense a worthy streamer.

I’m going to keep this one rather brief and just say it’s a simple fade on the Texans. The Texans are last in offensive yards per game by a longshot and I don’t really see that improving. Additionally, they’ve turned the ball over 20 times and allowed their QB to be sacked almost 3 times per game. If you need a defense, while it might hurt to do it, plug and play the Jaguars this week.

This next play is a bit hypocritical as I mentioned Justin Fields as a potential streamer. Yet, I sit here and also mention the Vikings. This is mainly for the sack potential.  Chicago is allowing 3.2 sacks per game, the second most of any team in the NFL. On the contrary, the Vikings have a league-leading 41 sacks this year. These numbers would indicate this Vikings defense getting after Fields this week and scoring your team points when they bring him to the ground and force him to make bad decisions. While I wouldn’t recommend playing both the Vikings D/ST and Fields, I think they are both solid options as streamers independent of each other in Week 15.

When it comes to Kickers I’ve mentioned this strategy multiple times. Go to the game with the highest betting total and pick one of their kickers, this week that leaves you with Dustin Hopkins versus the Chiefs. The math is simple, more points on the scoreboard means more kicks and more kicks means more points for your fantasy team. On top of that Hopkins has only missed two kicks this year. If you need a kicker, look no further (this strategy has been pretty successful lately).

The next kicker is surprisingly is rostered in less than half of leagues, Matt Prater. Prater should be rostered in every league with the range that he has. He’s hit 6 times from 50+ yards and those are the ones that matter the most in Fantasy. Additionally this week Prater has the Lions on deck so the Cardinals should be putting up a lot of points so Prater is a strong option among the streamers at kicker in Week 15.