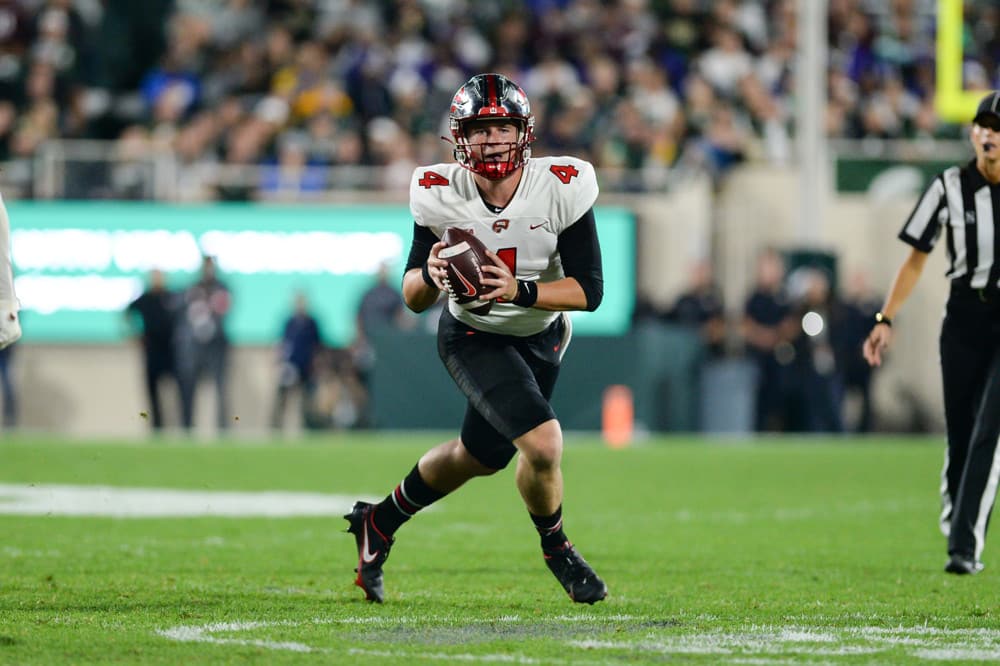 After Friday’s bowl game appetizer, Saturday offers up the main course. There are six bowl games including at least one Power 5 university. Clear your calendars and make sure to check out my Bowl Game Picks before making any bets. From sunrise to sundown we have bowl games and it’s a beautiful thing.

Western Kentucky rolls out the best passing attack in the nation, throwing for over 434 yards per game. In the offseason, WKU hired Zach Kittley from Houston Baptist as OC and Kittley convinced QB Bailey Zappe and three wideouts to come with him. When hired, Kittley proclaimed “we were brought here to light up the scoreboard.” He and his QB did exactly that, throwing for 5,545 yards and 56 TDs this season.

Along with success usually comes opportunities and after just one year, Kittley was hired by Texas Tech. Additionally, a starting WR and OL have hit the transfer portal. However, in a bit of a strange move, it appears everyone will remain at Western Kentucky for the bowl game

. A sign of unfinished business for the Hilltoppers perhaps?

WKU started the year 1-5 but as the offense started clicking, and as the schedule eased up, the team won seven straight before dropping the C-USA title game to UTSA. Their opponent, App State, also lost in their conference championship to Louisiana, 24-16. The two played earlier in the year, also in Lafayette, and App got beaten badly, 41-13. The only other blemish on the Mountaineers’ record was a Week 2 loss at Miami, 25-23.

It will be a contrast of styles in Boca Raton. The Hilltoppers will push the pace and put up points. The Mountaineers will be more methodical and play a more physical brand of football. Chase Brice has had a fine season in Boone at QB and there’s a stable full of good running backs. App State will need to get the ground game going, control the clock, and keep the WKU offense off the field as much as possible.

We’ll have to monitor the WK situation to see if the existing players and coaches stick around for this game as initially reported. If so, I love the fact they haven’t bailed. It means they’re proud of what they accomplished this season and want to see it through. That’s enough for me to lean in Western Kentucky’s direction and take the points. Considering the Hilltoppers have scored 40+ points in six straight games, I’ll also grab the Over.

The UTEP Miners of C-USA were a nice surprise this season, going 7-5 and reaching their first bowl game since 2014. They’ll be headed a few hours north to Albuquerque to face the 9-3 Fresno State Bulldogs of the MWC.

While UTEP is a nice story, they dropped four of their last five games and appear to be over-matched vs Fresno. Looking at their schedule, the Miners only have one victory over a team with a .500 record and that was vs ODU on October 2nd. They beat up on the bottom of the conference with additional wins vs bad teams in New Mexico State and Bethune Cookman.

Gavin Hardison has been around the block a few times and is an experienced and serviceable QB. His favorite target is WR Jacob Cowing who amassed over 1,300 yards with 7 TDs this season. Additionally, UTEP has two solid RBs in Deion Hankins and Ronald Awatt toting the rock. It’s not an explosive offense but it’s decent enough.

The defense has actually been a pleasant surprise this season, finishing 31st in the country. However, take that with a grain of salt – UTEP’s schedule did not include many offensive juggernauts. The better teams they played put up points with ease (Boise – 54, UTSA – 44, UAB – 42).

On the other side of the field, Fresno had an excellent season and their HC Kalen DeBoer was rewarded with the Washington job. DeBoer is also bringing offensive coordinator Ryan Grubb with him and both have already departed. After initially entering the transfer portal, QB Jake Haener has confirmed he’s returning. At this point, I’m assuming he’ll be under center which is obviously a big deal.

It’s always tricky betting on a team in the midst of a coaching change but Fresno is far and away the superior team. Sporting the 14th best offense in the nation, the Bulldogs should have no problem putting up points on UTEP. We could be looking at a final score around 38-17 or so. This game has blowout potential.

After losing Zach Wilson, BYU was supposed to have a down year. Well, Jaren Hall came in at QB and the Cougars haven’t missed a beat – going 10-2 with a resume that includes five wins over PAC-12 teams. The conference champion Utah, both Arizona schools, Wazzu, and USC all fell victim to the boys from Provo.

BYU fans are accustomed to excellent offenses and this year was no exception as the Cougars come into this game with the 17th most yards gained in the country. It’s a balanced approach with Jaren Hall slinging the rock and Tyler Allgeier (1,400+ yards, 20 TDs) emerging as a bona fide bell cow. The UAB D has been stingy as usual (16th best in the country) but they’ll have their hands full on Saturday.

Lately, it seems as if UAB regularly puts up 8-4ish type seasons under HC Bill Clark. They have some transfers exiting the program (like QB Tyler Johnston) but all starters should remain in place as long as star DE Alex Wright doesn’t sit the game out. It should also be noted that starting RB DeWayne McBride injury status is currently up in the air.

As good as UAB has been this season, the closest to a marquee victory on their resume is a road win at Marshall who finished 7-5. They should have won at UTSA but the other quality opponents they faced won fairly easily. Georgia beat UAB 56-7 and Liberty went into Birmingham and won 36-12. The Blazers certainly don’t have wins over the caliber of teams BYU has beaten.

I’m afraid UAB may meet the same fate against BYU as they did against UGA and Liberty. They’ll hang around for a while in which should be a competitive matchup but BYU will pull away in the second half and win by 10-14 points.

Both teams enter the game with identical 7-5 records with Liberty on a 3 game losing streak and EMU losing two of their last three. Liberty had their sights set higher coming into this season after a 10-1 campaign in 2020. On the other hand, after going 2-4 last year, EMU should be pleased with their progress this season.

What the Eagles shouldn’t be pleased with is their defensive performance. The unit ranks 101st in the country giving up 427.8 YPG. Challenging this D will be an offense led by NFL prospect QB Malik Willis. It has been confirmed, in a somewhat surprising decision, that Willis will play even though he’s a projected first-round pick. For a guy who was once an Auburn Tiger, finishing his career in the same state as it started is a big deal. Expect him to show out.

As disappointing a season it was for Liberty, the fact that Malik Willis isn’t sitting this game out is huge. He’ll be the difference-maker against a bad Eastern Michigan defense. I like Liberty to roll in what should be a high-scoring contest.

I was dead wrong about Utah State in the MWC Championship game a couple of weeks ago. The Aggies rolled into Dignity Health Sports Park and slapped around San Diego State, 46-13. I mistakenly thought the Aztec ground game would run wild. Instead, the Aggies limited SD St to just 315 yards of total offense and forced two turnovers en route to capturing the conference crown.

Typically, it’s the offense that carries Utah State. After seven years as the Head Coach at Arkansas St, Blake Anderson brought QB Logan Bonner with him to Logan, UT, and the duo put up the 15th most passing yards in the nation. Deven Thompkins, who reeled in 96 catches for almost 1,600 yards and 9 TDs, is the WR1 for the Aggies but its a deep receiver unit that can hurt defenses in a variety of ways. Additionally, Calvin Tyler Jr is an experienced and proven tailback.

Trying to slow down this dangerous USU offense will be a somewhat spotty Oregon State D. The Beavers especially struggle against the pass, giving up 241 YPG which ranks 87th in the country. At 7-5, Oregon State has exceeded preseason expectations but defeats vs Colorado and Cal surely haunt them. Neither Cal nor Colorado should put up 39 and 37 points, respectively, on a Pac 12 defense.

While the D hasn’t been stellar, Chance Nolan has been steady at QB and BJ Baylor has been excellent at RB, rushing for 1,259 yards and 13 TDs. If the Beavers can get their big O-Line rolling, it could be a long day for the undersized Utah State D that’s not particularly adept at stopping opponent’s ground games.

However, I’m on the dog here. Utah State has enough offensive firepower to keep this game within arm’s reach. It’ll be another fun game with plenty of points. Aggies cover but Oregon State pulls out a hard-fought victory, 34-30.

Here’s the first game where a coaching defection could have a serious implication on the outcome. Louisiana’s HC Billy Napier is now the new front man for the Florida Gators. He is already in Gainesville and will not be coaching this game. Additionally, he’s taken with him several assistants, a recruiting coordinator, and others within the program.

It’ll be challenging without Napier, but this is an old and experienced Ragin Cajun squad. QB Levi Lewis has been around forever and ULL has one of the best defenses in the Sun Belt. In fact, only allowing slightly over 18 points per game ranks 11th best in the country. This group has only lost two games over the last two seasons so don’t think they’ll roll over because their coach has moved on.

Trying to hand Louisiana their third loss in two years will be a Marshall team under first-year HC Charles Huff. A 7-5 record is a solid inaugural season and with the exception of the WKU blowout, the Thundering Herd were in every game. Losses to ECU, App State, UAB, and MTSU were all one-score games.

QB Grant Wells was banged up towards the end of the regular season but is now a full-go heading down to New Orleans. Marshall will move the chains with the 12th best passing offense in the country and then rely on RB Rasheen Ali to finish drives once in the red zone. The Freshman RB from Cleveland has 20 rushing TDs on the season which is tied for 1st in the nation.

As the more experienced team, Louisiana was head-and-shoulders better at winning close games. From a talent perspective, there may not be a huge gap between the two teams. I expect a close and low-scoring affair. Especially without a full coaching staff for ULL, give me Marshall to cover.