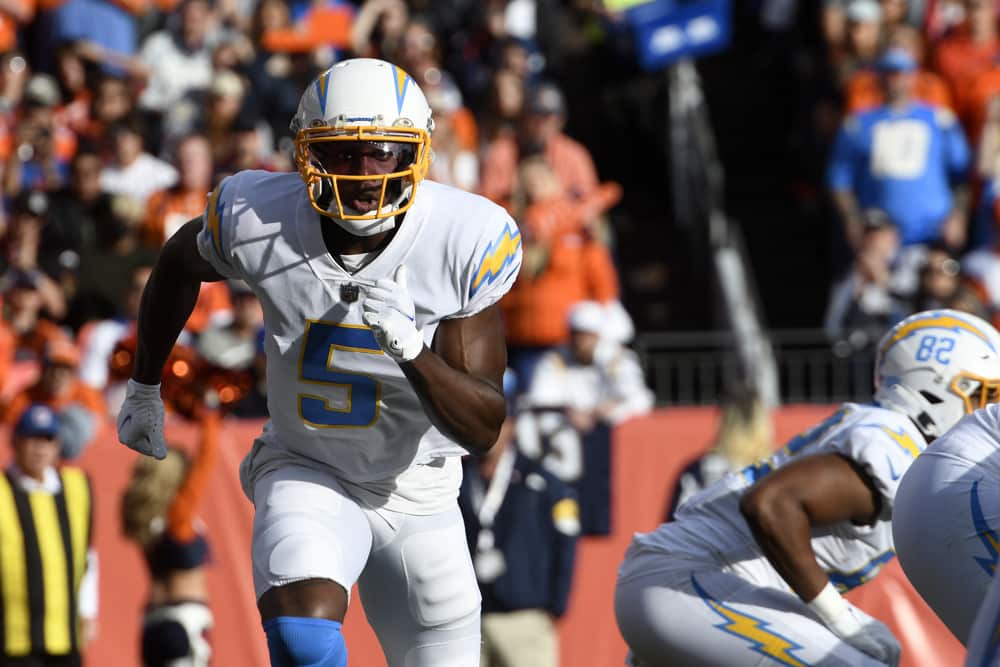 Two AFC West rivals lock up for the Week 15 NFL Thursday Night Football matchup. Both have endured various levels of turmoil this season. Both enter this game with their division title in their sight. If nothing else, once the dust settles Thursday night, we will have witnessed an exciting, and hopefully high-scoring battle. Their first tussle ended in 54 combined points and 789 yards in combined offense.

It looks like we will enter into another injury-ridden, late-season game. For the Chargers, Keenan Allen and Austin Ekeler are both still listed as questionable. Allen sat out last week due to COVID, while Ekeler departed with an ankle injury last week. Also, the status of both Los Angeles tight ends is up in the air. Keep a close eye on those practice reports this week and be ready to make adjustments when needed.

This slate is top-heavy, and for good reason. Both of these teams lean heavily on their stars leaving little production for the periphery players. These players are expensive, so finding value farther down the roster is once again important. That may come in the form of Joshua Kelley or Justin Jackson if Ekeler sits. Of course, we won’t know that until we know Ekeler’s status. With that in mind, here are some plays that can hit despite circumstances.

For a team that is recognized for its quarterback, Clyde Edwards-Helaire has given Chiefs fans something to talk about this season. Outside of his injury and the missed games as result, the second-year back has begun to mature as a professional running back. Last week against the Raiders, CEH proved he can handle goalline duties. He punched in two touchdowns from inside the ten-yard line on the way to a 19 point fantasy day. It probably could have been an even bigger day were it not for a lopsided game. With the blowout shaping up early, Kansas City started to get Derrick Gore more involved. Gore promptly ripped off a 51-yard touchdown run on his way to a 16 point fantasy day. Even still, Edwards-Helaire did enough before to reward those who rostered him.

He’ll bring that momentum into a matchup against a team that represents the first of his two 100-yard games of the season. Back in Week 3, Edwards-Helaire carried the ball 17 times for an even 100 yards. He also added a pair of receptions to his day which he ended with almost 21 fantasy points. This should be another week in which CEH can payout. In the last three weeks, three running backs have had at least 16 carries against Los Angeles. The Chargers have allowed two of the three to score double-digit fantasy points. Last week, they surrendered 64 yards to Saquon Barkley as well as 56 to Devontae Booker. Edwards-Helaire has shown he’s capable of handling an expanded workload this season. He’ll get that chance and then some in a slate filled with Week 15 NFL Thursday Night Football fantasy potential.

Without Keenan Allen on the field Sunday, Jalen Guyton came through for his team. He caught all three of his targets for 87 yards and a touchdown. His score came on a beauty of a pass from Justin Herbert over two defenders that found Guyton 59 yards down the field. It marked his second trip to the end zone in as many weeks. Two weeks ago, he logged 90 yards while catching all four of his targets. The young speedster is breaking out at just the right time as far as the Chargers are concerned. He’s proven that he can perform regardless of who else is lined up next to him. He’s also proven that all he needs is one big play to return on his value.

If you expect this game to be a showcase of both of these high octane offenses, and you should, every pass-catcher on the field is in play. Both of these teams can drop 40 points on their opponents. Likewise, though, each has allowed their fair share of points against them this season. Using their meeting earlier this season as a gauge, we are in for a decent amount of passing yards. Herber accounted for 280 of them back in Week 3. While Guyton ended the day with none of them, his role with the team has changed some since then. His situation could improve even more should Ekeler have to miss this game. If that happens, Guyton could pick up a few more of his teammates’ vacated targets. His price is right for a flex flier in your tournament rosters heading into the Week 15 Thursday Night DraftKings slate.

It may not be the sexy play, but Harrison Butker has been easy money as of late. In three out of his last four games, he’s returned at least three times on his salary. Even in the week he failed to reach that mark, he still managed nine fantasy points. He’s hit three field goals from 50+ over the last three weeks. He’s made 13 extra points going back to Week 10. Plus, if you can believe it, over the last two weeks, he has outscored Travis Kelce. Will that trend continue? Absolutely not. With that said, being able to flex a kicker with the potential to outperform some of the higher-priced, higher-rostered players on the slate could be the edge you need to take down the whole thing.

Harrison Butker extends his team record with another field goal from 50-plus yards this season.

He will once again duel against the Chargers as he did back in Week 3. In that game, he attempted only one field goal which he nailed from 34 yards. He also converted all three of his point after attempts. Of course, that was when Kansas City was sluggish. Now with a full head of steam behind them, you can expect more from this offense. This means more work for Butker. It also means more fantasy points for your Week 15 Thursday Night Football lineups. It’s hard to find a guaranteed return on investment on any slate. Butker is about the closest thing you can get this week.

With Allen sidelined last week, Joshua Palmer saw a team-leading seven targets. He caught five of them for 66 yards and a touchdown. Obviously his potential hinges on the final injury status of Allen. Should the veteran miss this game, Palmer becomes the steal of the slate. It won’t take much for him to pay back his investment. Not to mention, it will free up quite a bit of money for a pricey stack from either team. Play Palmer in your DraftKings lineup for Week 15 NFL Thursday Night Football pick only if Allen is out.