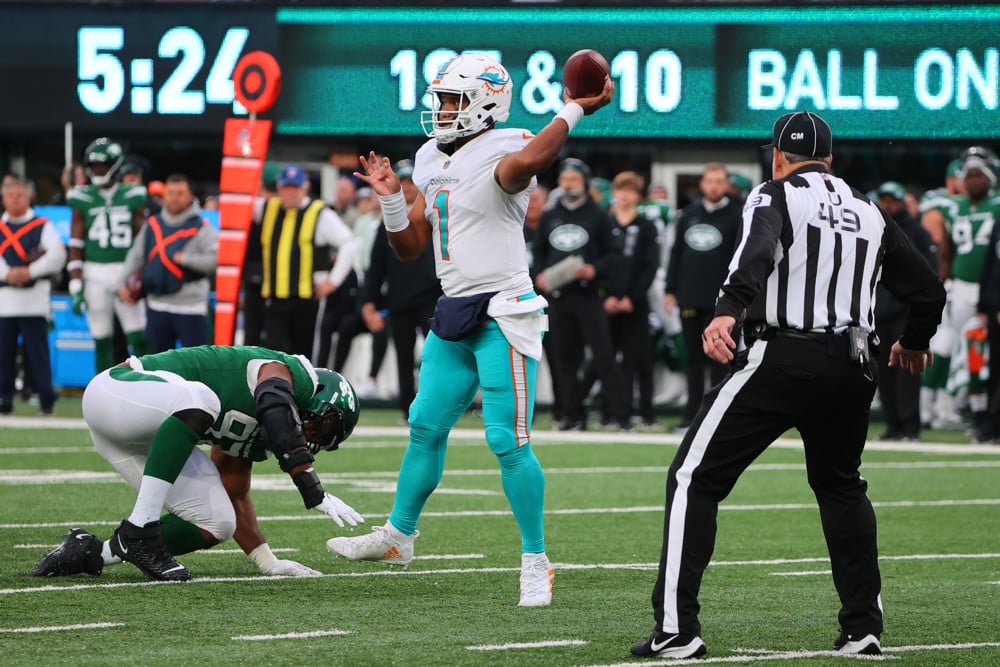 The fantasy football playoff are finally here for most of you so here are some Early Week 15 Waiver Wire targets to help you set your postseason rosters and win your league.

I know what you’re thinking…he’s not even a starter for his team, but hear me out. Nyheim Hines does get his fair share of snaps in the Colts offense, not only in the run game but also in the passing game. This Saturday, they have a tough matchup going up against a New England Patriots defense that ranks 3rd in passing yards allowed. We all know head coach, Bill Belichick prides himself in taking away what the opposing team does best. In this case, that would be to eliminate Jonathan Taylor from taking over. Hines will be a great FLEX play for teams looking to win this weekend and advance to the next round.

I do not understand what’s going on! Tua Tagovailoa being rostered in 39% of ESPN leagues is incomprehensible. He has a QB rating of over 100 in his last four games since coming back from injury. He also seems to have total command of the playbook and offense down in Miami. Oh yeah, I forgot to mention, they go up against a Jets defense that’s ranked 32nd in points allowed and 31st in total yards allowed. Tua has thrown for five touchdowns in his last three games and should add a couple more on Sunday. Coming off a bye, the Dolphins should be ready to take care of business this week against a divisional opponent that looks that they’ve called it quits for the rest of the season.

No one else in the NFL even has 2 straight.

If you don’t do anything else this week, make sure to roster Rashaad Penny on your team. He was able to rush for 137 yards on 16 carries and 2 touchdowns against the Texans in Week 14. He is the clear starter moving forward for a Seahawks team that hasn’t had an answer at the running back position for the last several weeks. They will face a Rams defense that ranks in the top 10 in rushing yards allowed at 100 per game. Although, Penny will get the majority of opportunities out the backfield, translating into fantasy points. He is rostered in 5.7% of ESPN leagues, so make sure to get him with your Week 15 Waiver Wire claim while you can.

Have a day, Rashaad Penny!

The Jets offense has taken a hit with injuries at the receiver position the past few weeks. Jamison Crowder will benefit from the lack of options they have in Week 15. Against Miami in Week 11, Crowder had six receptions for 44 yards and a TD on seven targets. With Elijah Moore out for the rest of the season, I look for Crowder to get more opportunities in this offense. The Jets will be behind early and often out in Miami forcing them to throw the ball in an effort to come back. The Dolphins are ranked towards the bottom in passing yards allowed at 28. This gives the Jets a glimmer of hope in the passing game. I recommend taking a look at Crowder for your FLEX spot if you have a need.

Jalen Guyton was the obvious choice at receiver in Week 14 with Keenan Allen out, but can he continue to produce for this high-powered offense? Yes! They will face a Kansas City Chiefs team on Thursday night that ranks 26th in passing yards allowed for the season. This game has the highest total set for Week 15 at 50.5 points, so this will be a high-scoring game. Guyton led the team in receiving yards at 87 and added a TD on three targets against the New York Giants. I expect the Chiefs to try to contain Keenan Allen and Mike Williams. This will lead to some opportunities for Guyton on the outside. He is rostered in 14% of ESPN leagues and is a good option for a FLEX spot on fantasy teams.

Jalen Guyton on Justin Herbert’s TD pass: “I saw both of the safeties react like really quickly like something’s coming. I knew the ball was coming. … It’s really easy to make those catches when it’s a perfect pass.” #Chargers https://t.co/KOY2YnVy3I

The Bills are looking to make a push for the playoffs, and they will have to lean on Gabriel Davis to make that happen. He has been able to find the endzone in his last two games as he looks to be healthy again. Josh Allen feels comfortable targeting Davis when a big play is needed due to his great hands. Good news for fantasy managers who may be looking for an option at the WR or FLEX position. Undervalued in ESPN leagues rostered at 2.5%, Gabriel could be a nice pickup for fantasy managers not only in Week 15 but in the upcoming weeks as well.

PFF: #Bills’ Gabriel Davis is heating up since Week 10: https://t.co/ofbrS9mWMU