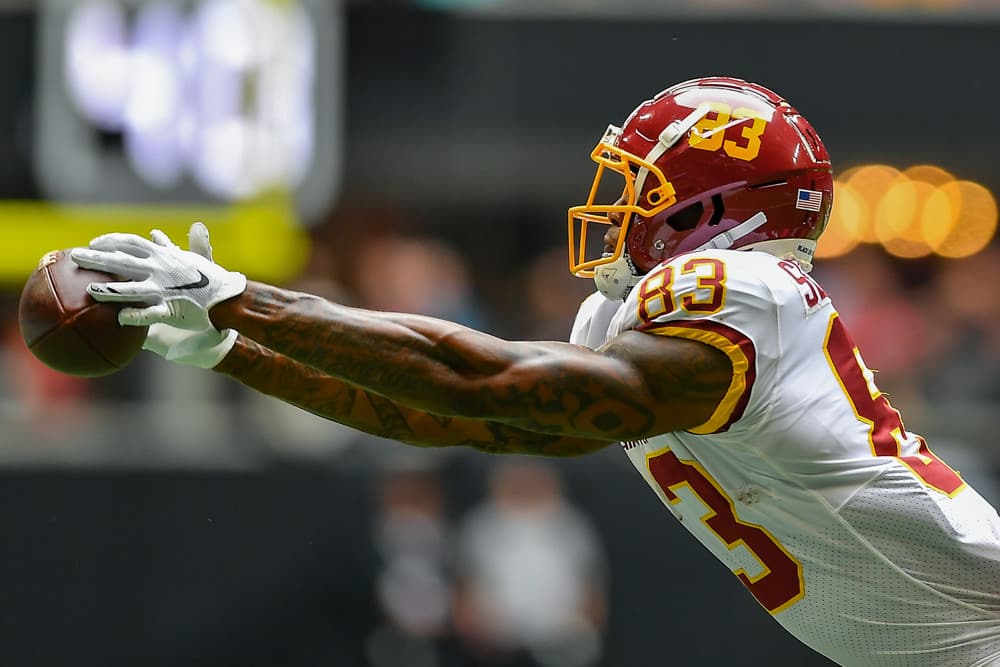 Well, the Fantasy Season is certainly winding down at this point. Most leagues are headed into their 14th and final week of the season so playoff bids and seeding are on the line. Let’s dive into the potential fillers for your roster to guarantee a win in what might be your last game of the regular season. Here are all the best streaming options at defense, quarterback, tight end, and even kicker! This is the best and most comprehensive guide to the Week 14 fantasy streamers.

A lot of people might be wary when looking at the possibility of starting Cam Newton this week. While I get it off a week in which he only completed 5 passes for 91 yards and 2 picks, he still does possess some upside. First things first you can’t mention Cam without bringing up the fact that the absence of Christian McCaffrey essentially makes him the Panthers’ goal-line back. Additionally, he has a pretty favorable matchup against the Falcons this week. The Atlanta secondary is currently in the bottom half of the league in passing yards allowed per game and additionally is averaging 250 yards per game on the road. If Cam can even eclipse 200 yards in the air his rushing potential should do the rest of the work, making him a viable starter.

Once again we have another guy who a few people have been burned by one too many times. While the Jaguars’ offense has been abysmal, lately I expect that to change this week. They matchup against the 26th ranked secondary in the league this week in the Tennessee Titans. While the Titans have been plagued by injuries I still expect them to get out to an early lead, forcing the Jaguars into a pass-heavy offense. On top of this, Lawrence has already seen the Tennessee defense before and had a pretty solid performance against them, throwing for 273 yards. If you need a streamer, Lawrence could be your guy.

Next on our list, we have Ricky Seals-Jones filling in for the injured Logan Thomas. This isn’t the first time we’ve seen Seals-Jones in this TE1 role as he filled in from Weeks 5 through 10 this season. In that period we saw him put up some pretty decent numbers averaging 4 catches on 6 targets and 38.4 yards per game in that span. On top of a solid prior record, he’s facing off against a Dallas Cowboys defense that averages 7.5 fantasy points per game against TEs. This isn’t a number that would amaze you but it is near the top of the league. In what should be a decently high-scoring game Seals-Jones is worth a play.

Unfortunately for some fantasy owners, Adam Thielen went down last week against the Lions and will miss tonight’s game versus the Steelers. This is certainly a big void to fill and those targets have to go somewhere. While many think these targets will go to K.J. Osborne, I wouldn’t rule out Conklin. Conklin is coming off a 9 target game, which Thielen sat out most of. While the sample size is incredibly low, it could be indicative of a preference towards Conklin when Thielen isn’t available.

So far this year the Chargers have been a pretty shaky defense, sitting at 16th in the league in YPG and 28th in PPG allowed. This normally wouldn’t be a team you’d be running to start but they have a very favorable matchup against the Giants. On top of the fact that the Giants are a bad offense, they’ll likely be starting Mike Glennon this week. With a less mobile QB under center and defense that averages 2.3 sacks per game, I would expect this Chargers defense to come at Glennon and force him into bad decisions. *Note: Glennon is still questionable, if he doesn’t play Jake Fromm will make his 1st career start, in that case, I like LAC even more.*

We’re not going to get too cute on this one. The Seahawks have been a bad defense, that is true but that’s also why they’re available. This week they take on the Texans and I believe the Texans’ offense is worse than the Seahawks’ defense. It’s a pretty simple fade on Houston. But if that isn’t enough to convince you, the Texans are allowing nearly 3 sacks per game. And Tyrod Taylor has turned the ball over 8 times in 6 games, go with Seattle as your streaming defense.

When it comes to kickers and adding one on the waiver wire most people tend to just pick the guy projected the most points. For many, Brian Johnson is it this week, for good reason. He has yet to miss a kick this year so far in 5 games and he’s coming off a game where he nailed a game-winner. While his sample size is small he has hit his only attempt from 50+ and is looking like he could be reliable going forward. Johnson might go beyond being a Week 14 option among streamers.

I mentioned this last time I wrote this piece and it was actually Succop then like it is now. If you don’t know much about kickers, it’s never a bad idea to take someone playing in the game with the highest betting total. This over-under for the Bills versus the Bucs is set at 53.5 meaning we should see a good bit of scoring. Meaning every time the Bucs score, so does Succop. It also doesn’t hurt that Succop has only missed 3 field goals this year, with one of which being blocked.