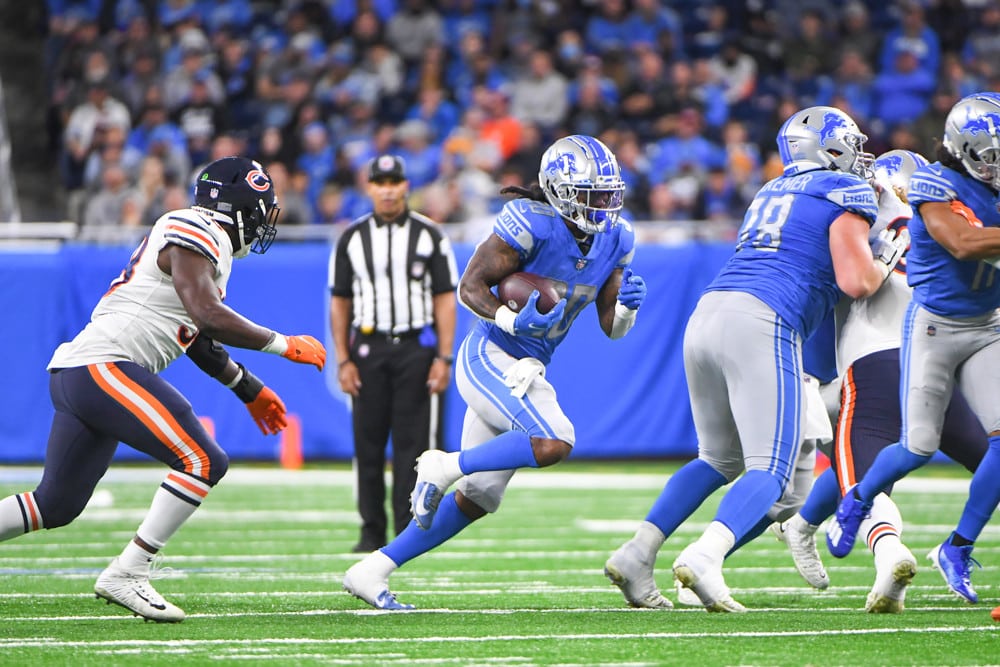 Welcome to the new top 10 weekly DFS stacks article where I will be breaking down the DraftKings main slate to identify my top 10 DFS stacks for Week 13. Stacks in DFS can be defined as; playing two or more players from the same team in a single lineup. Stacking in DFS contests has become the predominant roster construction strategy particularly for GPP tournaments, with a variety of unique and creative ways to build stacks and maximize your scoring upside each week. The most popular stacking options include the skinny stack, the double-stack, the run back stack, and the full-on game stack, and the running back paired with a defense stack.

Tom Brady ($7,200) and the Buccaneers’ offensive passing attack were both a huge disappointment last week. Leonard Fournette spoiled the party, scoring four touchdowns and leaving Rob Gronkowski the only pass catcher worth rostering. This week the Brady and the Bucs are back and have a 30.75 implied total against the Atlanta Falcons. I’m rolling out a Buccaneers’ onslaught lineup, with Brady, Chris Godwin ($6,600), and Rob Gronkowski($5,300). The Falcons rank 27th against wide receivers, giving up 16 touchdowns and 1,600 yards on the season, good for 37 points per game.

I expect Brady to continue to focus his target attention on Gronkowski, who he peppered with nine targets in Week 12. PFF rates Godwin’s matchup against the Falcons’ secondary one of the best for Week 13. I’m comfortable rolling with this stack in small to medium GPP tournaments. This could be one of the higher upside DFS stacks on all platforms, including DraftKings, in Week 13.

Players to pair with: Jamaal Williams (RB) and Antonio Gibson

Matthew Stafford ($7,300) and the LA Rams offense have been throwing the football at 73% the last three weeks. Darrell Henderson has been banged up and the game script has also kept Matthew Stafford dropping back. The Rams have both a positive rush and pass blocking advantage in this matchup against the Jacksonville Jaguars. Stafford’s wide receivers saw 29 targets last week. That’s a pass funnel trend we want to capitalize on this week. Cooper Kupp ($9,000) is averaging 26.8 DraftKings points per game and has one of PFF’s best cornerback matchups for Week 13. If you are paying up this week, Kupp is a solid value given his volume and upside. Pretty sure we can all agree that OBJ ($5,500) is back!! He popped last week catching five receptions for 81 yards and a touchdown. I’m rolling with this stack in larger field GPP tournaments.

Players to pair with:

Derek Carr is the 8th ranked quarterback on DraftKings, averaging 24 points per game. The Washington Football Team ranks 32nd against quarterbacks, giving up 23.5 points per game. Carr is one of the better Week 13 values this week priced at only $6,000. Hunter Renfrow ($5,800) has nine targets in three out of his last four games. Darren Waller is trending towards OUT this week, which means that Renfrow will be leaned on heavily again by Carr in this 50 point total.

Running it back with Antonio Gibson at $5,700, with J.D. McKissic potentially missing the game, is a no-brainer. Gibson saw an insane 36 touches last week. Look for him to secure at least 20 this week. Adding Logan Thomas at $4,000 to this stack makes sense given that the Raiders rank 31st against tight ends, giving up over 17 points per game. This game stack is leveraged enough to be viable in all tournaments. Choosing to go heavy in one game from among all the possible Week 13 DFS stacks can be a highly rewarding DraftKings strategy.

Kirk Cousin ($6,500) truthers are everywhere these days now that he’s scored over 25 points five times this season. I was on Cousins and Justin Jefferson ($8,200) last year, cashing in for 251 points and 5K last in Week 2. Fast forward to 2021. This week Jefferson, who has been averaging 10 targets his last three games, has the very best cornerback matchup according to PFF. Jamaal Williams will be filling in for D’Andre Swift this week and projecting for increased rostership at only $5,400. Williams will be a popular play, so make sure to find leverage plays to offset. I’m playing this stack in small to mid-range GPP tournaments.

Players with 2,400+ receiving yards in the first 2 seasons?

Stacking up Justin Herbert ($6,700) and Mike Williams ($5,700) in a run-back stack with Joe Mixon provides upside and stability. Herbert has thrown for over 300 yards six times this season and Williams has scored 20 or more points in five games. On the run-back, Joe Mixon is coming off a slate-breaking 35 point DraftKings Week 12 performance and now faces a run funnel in the LA Chargers defense. The Chargers have given up over 1,600 total yards and 15 touchdowns to running backs this season. Mixon’s projection is over 20 points according to the RunTheSims.com models. I’m playing him despite his popularity. This build works in high stacks mid-sized GPP tournaments for all your Week 13 DraftKings DFS needs.

Joe Mixon leads the NFL in rushing attempts without a fumble this season (208) 💪 pic.twitter.com/3vCYy5cXv1

Joe Burrow‘s ($6,300) 22 touchdowns are good for the 8th best amongst quarterbacks. Ja’Marr Chase‘s ($7,000) eight touchdown receptions are fourth-best this season for wide receivers. Priced-down after only averaging 10 points per game his last four weeks, Chase will be under rostered as folks flock to the cheaper Mike Williams. Keenan Allen ($7,500) is averaging over 20 points per game in his last four games and makes a great games stack run-back. This build works best in smaller field GPP tournaments as leverage away from Joe Mixon.

This is just utterly stupid pic.twitter.com/58FsRfoIX1

Jonathan Taylor proved last week that he was matchup proof, scoring 19.7 points against the Buccaneers’ fierce front seven. This week Talyor is priced up $100 to $9,200 and is worth every penny. The Texans have given up 1,500 total yards and 12 touchdowns to running backs. Taylor averaged 10.4 yards per carry and scored 31.8 points back in Week 6. The Colts are nine-point favorites and will be featuring Taylor all day long. He could rush for over 200 yards in this one. Pairing him with the Colts defense works on multiple levels. The Houston Texans rank dead last in the NFL in yards with only 265 yards per game. 14.9 points per game are also the worst in the NFL. The Colts defense leads the NFL in turnovers with 27. I’m rolling this stack in all tournaments.

Much to my own folly, I faded Elijah Mitchell ($6,000) at the beginning of the season. No more. My cohost at the Fantasy Millionaires, Mike “Cash” Collins was right, he’s a gamer. Last week Mitchell saw 32 touches and scored 30.8 points, rushing for over 130 yards and a touchdown. With Deebo Samuel missing this game, look for the 49ers to lean on Mitchell and the ground and Brandon Aiyuk ($5,600) through the air. Aiyuk has been averaging over six targets per game the last five weeks, good for 14 DraftKings points per game. Running it back with Tyler Lockett at $6,500 helps to leverage rostership concerns if Elijah Mitchell is too chalky. I’m rolling this stack out in mid-size to larger field GPP tournaments to lead all my Week 13 stacks over on DraftKings.

• Aiyuk has been targeted 47 times this season but has only dropped 1 pass, per @PFF

Quite the turnaround for Aiyuk pic.twitter.com/o9PIMXNIRU

Lamar Jackson ($7,800) is coming off his worst performance of the season, throwing four interceptions. Thankfully he’s playing a Pittsburgh defense that has been bludgeoned the last few weeks, giving up over 40 points to wide receivers. Mark Andrews has six fewer total points than Marquise Brown but is priced $500 less this week at $6,000. He’s the priced-up play that should avoid too much rostership and help you to differentiate your stack. Diontae Johnson ($6,800) averaging double-digit targets this year and has at least 11.7 points in every game this season. This stack plays in higher stakes smaller field GPP tournaments.

Lamar Jackson throwing to his receivers during Thursday’s practice pic.twitter.com/l0HzOOr6Yy

James Conner ($5,900) is averaging 22.7 DraftKings points per game over the last four games. Chase Edmonds is still sidelined on the IR, which means that Conner is about to be unleashed on a Bears defense that has given up close to 1,500 total yards to running backs. Pairing Conner with the Cardinals defense ($3,400) is the play given that the Bears could barely beat the Lions and had trouble consistently picking up first downs with Andy Dalton at the helm. Vegas gives the Bears a 19 implied team total, which is one of the lowest this week. It would not surprise me to see the Cardinals defense keep the Bears to 17 points or fewer. A few sacks and a turnover should be expected as well, providing at least the opportunity for a pick-six. The Cardinals are a nice, low-cost option among the Week 13 DFS stacks on DraftKings.