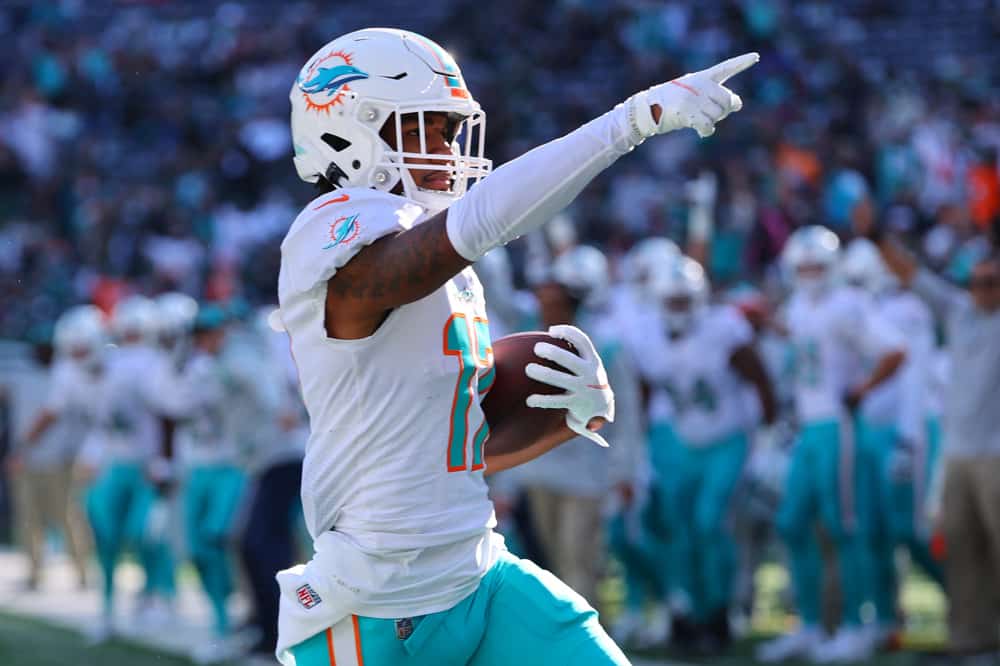 As many of us prepare for the final few regular-season matchups, the Week 13 Fantasy Football Rankings update is out! Some of us need a few wins to get into the playoffs. While others are jockeying for playoff seeding. Either way, this update is key as we saw many key fantasy options good down to injuries in Week 12. Many of us are looking to replace Christian McCaffrey, Dalvin Cook, A.J. Brown, and Darren Waller. On top of the injuries, we are also battling the Week 13 byes of the Titans, Panthers, Browns, and Packers. Luckily for you, we have you covered over at SGPN with our Week 13 Fantasy Football Rankings Update!

How can we do a Week 13 fantasy football rankings update without talking about last week’s RB1? Leonard Fournette has found another gear this year in Tampa. Last week he rushed 17 times for 100 yards and 3 touchdowns. He added 7 receptions for 31 yards and another touchdown. This all totaled up to 44.1 PPR points!  Over the past three weeks, Leonard Fournette has seen an uptick in the receiving work and become a bell cow back for the Buccaneers.  He has produced double-digit PPR fantasy weeks in the last three games due to this uptick in usage. As we look forward to Week 13 he draws a great matchup against a weak Falcons defense. The Buccaneers should control this game and I expect a lot of Leonard Fournette in the second half. This is why he has moved up to the RB6 in Week 13.

Such a good call on this Leonard Fournette game-winning touchdown pic.twitter.com/mdyYrE0BCb

We could call it a resurgence on a young player’s career, post Week 9 he has been on a tear. Antonio Gibson has begun to take over the backfield again from JD Mckissic. He has seen 24,19,29 carries in the last three games and produced over 250 yards in three games rushing. Along with the rushing uptick, he saw 7 targets last night on Monday Night Football. This helped him reach the 20 point plateau for the second time in three weeks. It’s clear he has been a focal point since the Washington bye week. In Week 13 he draws the Las Vegas Raiders who give up the fourth-most points to running backs weekly. For that reason, he has jumped up the Week 13 fantasy football rankings.

Jaylen Waddle has emerged as the clear number one receiving threat on the Dolphins roster.  He has produced four straight weeks of double-digit PPR points. Along with two 20 plus point weeks in his last two games. In Week 12 we saw him take 9 receptions for 137 yards and a touchdown. He finished the week as the WR1. This was against a tough Carolina defense who ranks fifth-best against wide receivers, only allowing 32 points per week to the position. In Week 13 he faces off against a much easier opponent in the Giants. They currently give up 37 PPR points to the position a week, this is the 12th worst in the league. In a game that the Dolphins need to win to keep their playoff hopes alive, I expect to see a lot of their star rookie. Due to this, he has flown up the Week 13 fantasy football rankings.

Many fantasy football managers hoped for a much better season from the highly athletic tight end out of Iowa. However, we have been met with weekly disappointment more than excitement. Noah Fant only has three double-digit fantasy weeks this season. Along with this, he has only seen double-digit targets twice all year. The emergence of Tim Patrick, Jerry Jeudy, Courtland Sutton has limited Noah Fant’s upside in a low passing volume offense. Even in a solid Week 13 matchup with the Chiefs, we see him slide down our rankings. Last week he only saw 4 targets which he produced 3 receptions for 12 yards. Along with his lack of usage he has not found the end zone since Week 6. With all of these factors he has slide outside the TE1 discussion in our Week 13 fantasy football rankings.