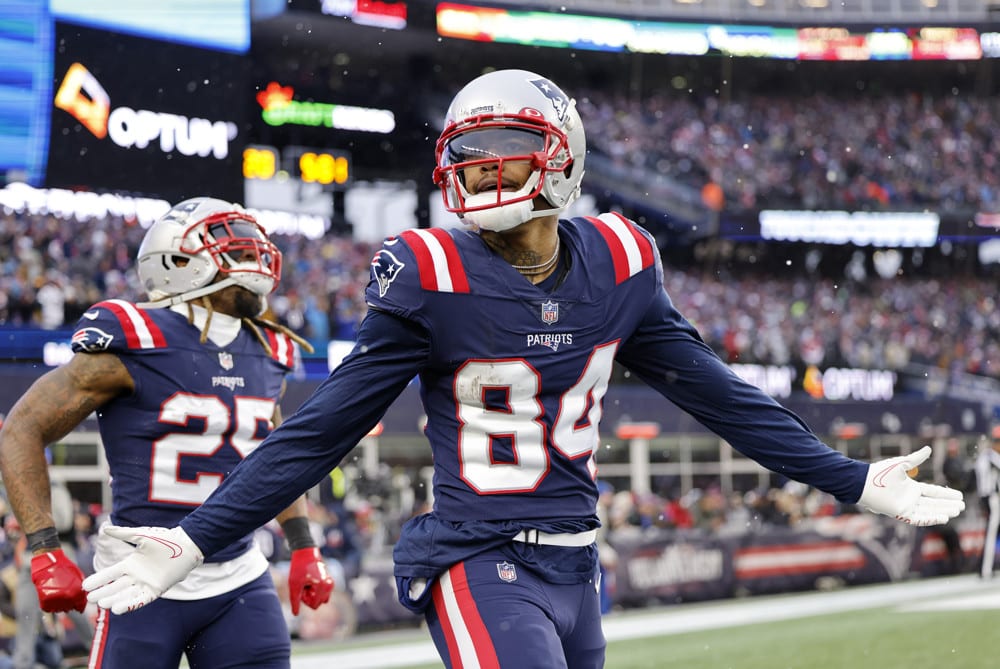 We are now two weeks out from the fantasy football playoffs, the Week 13 waiver wire may be the most important to date. With many trade deadlines past us, our only way to improve our roster is through the wire. Even at this point of the season, there are a few great adds. Some of these players may help you secure a Week 13 victory, and some are great additions for Week 14 and beyond. Think you know who’s going to win it all? Check out the latest Super Bowl betting odds.

This week we saw Kendrick Bourne emerge as a key piece of the Patriots passing attack. He took 5 receptions for 61 yards and 2 touchdowns. This was good enough for more than 23 PPR points and he is currently the WR4 in Week 12 scoring. Along with this the Patriots now are on a 6 game hot streak and lead the AFC East. Entering Week 13 he will face off against a tough Buffalo secondary that now has to do without All-Pro Tre’Davious White.  Kendrick Bourne may not finish as a top 10 receiver again, but he is worth an add as he is only rostered in 15 percent of ESPN leagues currently. With all the wide receiver injuries popping up he is a must-add on the Week 13 waiver wire.

We saw two 100 yard rushers for the Titans in Week 12, however, Dontrell Hilliard produced the higher fantasy point total. He had 12 carries for 131 yards and a touchdown to go along with 1 reception for 2 yards. This was all good enough for 18.3 PPR points, his second double-digit point week. As we look forward to Week 13 the Titans are on a bye. However as a team safely in the playoffs, he is a great addition. In Week 14 he will face the Jaguars and this means Hilliard could be a playoff hero this season and is only rostered in 23% of ESPN leagues. He should be on every contenders’ Week 13 waiver wire target list.

Did anyone pick up Dontrell Hilliard from their waiver wire? 👀 #TENvsNE

The chemistry between Josh Reynolds and Jared Goff emerged during the Lions’ Thanksgiving game. He took his 3 receptions for 70 yards and a touchdown. Reynolds saw 5 targets and was an important part of an offense looking for a playmaker. In Week 13 the Lions will face off against the Vikings who have allowed the second-most points to the wide receiver position. I expect Josh Reynolds to continue to see 5-6 targets a game making him a good flex play in favorable matchups. He is available in over 95 percent of ESPN leagues currently. That, along with his favorable fantasy playoff schedule means he should be a player on your Week 13 waiver wire target list.

Getting around to Thanksgiving games tonight. Nice to see #Lions using Josh Reynolds where he thrived in college: the perimeter. pic.twitter.com/PppQw0hU5E

Unfortunately, we saw Dalvin Cook go down with a shoulder injury that required a cart. This is not a good sign for a player who has struggled with injuries in the past. Due to these previous injuries, we have seen Alexander Mattison step up and perform at a high level. In Week 5 he took the lead against their Week 13 opponent the Detroit Lions, he posted over 26 PPR points. He took 25 carries for 113 yards along with 7 receptions for 40 yards and a touchdown. Currently, the Lions are giving up the third-most points to running backs. Along with this, he is only rostered in 33% of ESPN leagues. This makes him a must-add in the Week 13 waiver wire.

Last week we saw him step up and have 7 receptions for 107 yards against the Texans. Then during the week, the Titans placed star wide receiver, A.J. Brown, on injured reserve.  In a tough matchup in Week 12 he only saw 5 targets, and he only managed 2 receptions. One of these was a touchdown though, and this helped him produce his second double-digit point week in a row. Although on a bye in Week 13 he has a great matchup in Week 14. Due to the bye, he may not be on the top of other people’s waiver list. This should make him acquirable for any contender or A.J. Brown manager. He is available in over 96% of ESPN leagues currently. This makes him a must-add player for the Week 13 waiver wire.

After review, Nick Westbrook-Ikhine is in! #Titans

The former second-round pick has found a home in Las Vegas. On Thanksgiving Day he saw 7 targets, he produced 59 yards on 5 receptions. This was good enough for more than 11 PPR points. He was the most-targeted receiver outside Hunter Renfrow once Darren Waller went down. He is available in 99% of ESPN leagues currently and has a great matchup in Week 13. The Raiders face the Football Team who are currently allowing over 41 points to the position weekly. If Waller misses a week or two due to this injury we could see Zay Jones be flex viable. For this reason, he should be on your Week 13 waiver wire target list.

At this point in the season, it’s hard to come up with startable running backs. That being said, Matt Breida could be just that. On Thanksgiving Day we saw him produce his second double-digit PPR point week over the last three. He took 9 carries for 29 yards along with 2 receptions for 29 yards and a touchdown. He gives the Bills a change of speed back from Devin Singletary or Zack Moss. Due to this, he has started to see more usage over the last three weeks. Heading into a Week 13 matchup with the Patriots, who just gave up over 200 yards rushing to the Titans. Currently, he is only rostered in 6% of ESPN leagues. I expect Matt Breida to see 10-15 touches come Monday, this is why he is a must add on the Week 13 waiver wire.