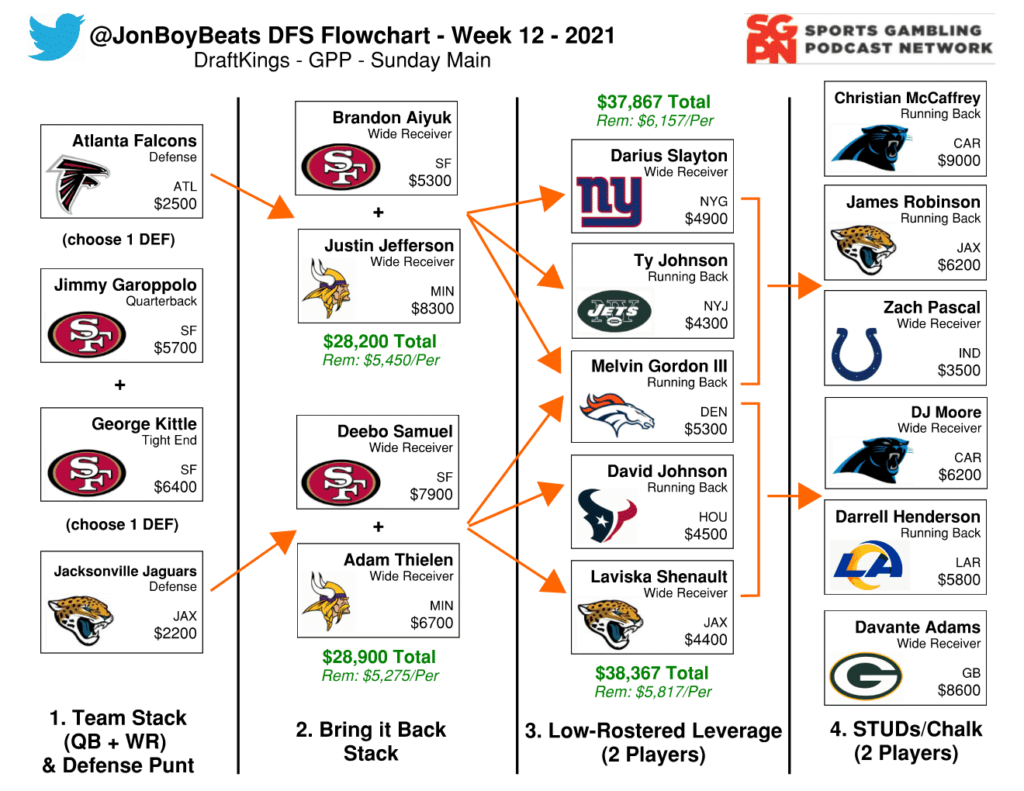 Coming off a bit of a stinker with the Thanksgiving slate of games a couple of days ago, it’s time to roll out the full Week 12 version of The Flowchart. On Thursday, the biggest mistake was forcing Swift/Montgomery into every lineup. They projected as the two most popular running backs, and in retrospect, it was an easy spot to get different in. We got some things right on the back end of The Flowchart, but our ceiling was capped because of those two. We’ve got a small slate of games this week and a bunch of really tight spreads. Since I spent a lot of words on the Thanksgiving article, I’m going to just get things out in a condensed format this week. Let’s dive in!

Minnesota and San Francisco have both been sneaky teams when it comes to scoring this season, but both of them come into this game running pretty hot. The Niners have broken the 30 point barrier in three of their last 4 games and the Vikings are averaging over 30 points in their last three. I think this game has sneaky shootout potential. I chose to take the SF side and Jimmy Garoppolo because I think the Vikings are a bit more condensed and easier to fit in as bring backs.

Justin Jefferson and Adam Thielen are both creeping up in salary, so doubling them up in a Kirk Cousins lineup gets harder. I like the idea of forcing George Kittle into every lineup and then picking between Deebo Samuel and Brandon Aiyuk on your two paths of The Flowchart. This lineup looks way better if Eli Mitchell gets ruled out as it will provide great leverage on a chalky Jeff Wilson Jr.

I can’t say that I’m excited about playing any of these running backs this week, but when you see some of their matchups you’ll understand why! Ty Johnson and David Johnson are taking part in the Toilet Bowl this weekend between the Texans and the Jets and neither run defense is very good. Both are great spots to save money. It was a bit of a coin flip for me on Melvin Gordon vs. Javonte Williams, but I decided to run out Gordon here against his former team. If making a lot of lineups, Williams makes a ton of sense too. Laviska Shenault could finally be forced to see some good usage against the Falcons now that Jamal Agnew is inactive. Darius Slayton is purely a bet on a big-play receiver in a game the projects very well for the Week 12 DraftKings flowchart.

When possible, I love finding ways to fit both Christian McCaffrey and Davante Adams into lineups. This is basically the only reason that Zach Pascal shows up in the last column. If you feel strongly about another player who allows you to fit in Adams or CMC, then be my guest! I love DJ Moore’s matchup against the Dolphins man coverage defense this week, I think he has the potential to have a huge game. James Robinson and Darrell Henderson are very strong RB options and won’t break the bank when firing them into lineups.