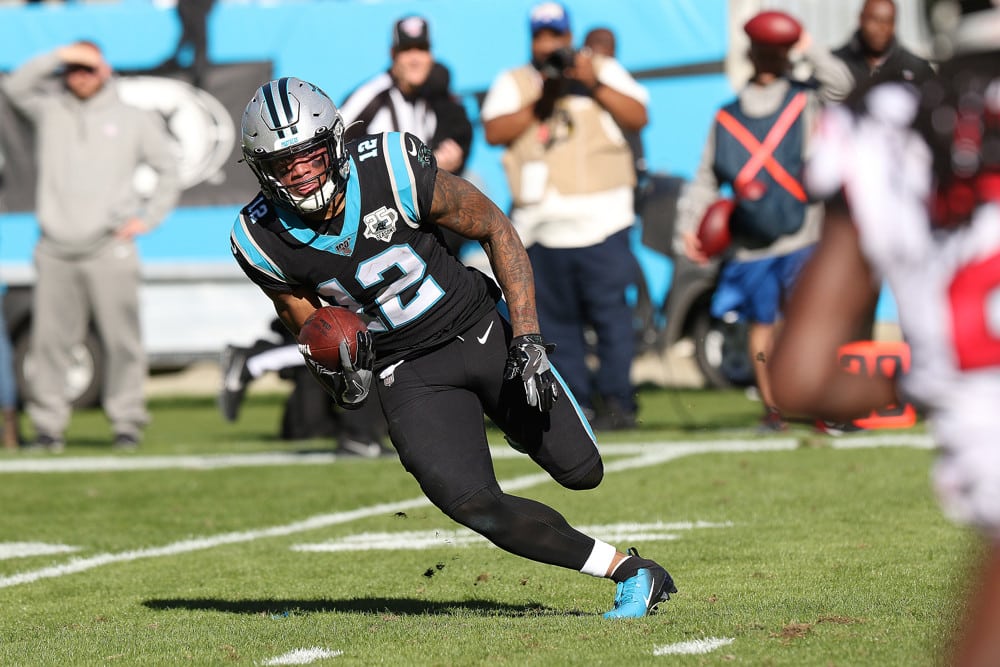 Welcome to the top 10 weekly DFS stacks article where I will be breaking down the DraftKings main slate to identify my top 10 DFS stacks for Week 12. Stacks in DFS can be defined as; playing two or more players from the same team in a single lineup. Stacking in DFS contests has become the predominant roster construction strategy particularly for GPP tournaments, with a variety of unique and creative ways to build stacks and maximize your scoring upside each week. The most popular stacking options include the skinny stack, the double-stack, the run back stack, and the full-on game stack, and the running back paired with a defense stack.

With no Patrick Mahomes or Lamar Jackson on the DraftKings this week, Tom Brady is the most expensive quarter on the slate at $7,600. In all fairness, Brady is averaging 25.9 DraftKings points per game, only 0.2 points behind Jackson. This week Brady and the Bucs look to exploit the Colts’ porous secondary, who have already given up 25 touchdowns and over 2,800 passing yards. The Colts matchup appears to be a slam dunk for Brady, who already leads the NFL with 29 passing touchdowns on the season.

Chris Godwin ($7,000) is my favorite wide receiver to stack with Brady this week. Mike Evans has been limited in practice and Antonio Brown is trending towards not playing again this week. Godwin has been averaging 9.25 targets the last four games and is averaging 22.75 points during that span. Running the Brady/Godwin stack back with Michael Pittman at $5,600 makes all the sense in the world given how the Colts have used Pittman in games that they are trailing or are underdogs. In those games, Pittman has had massive games seeing 12, 12, and 15 targets respectively against the Titans twice and the LA Rams. This week I expect Pittman to see close to double-digit targets as the Colts try to keep up with the Bucs. I’m comfortable rolling this stack out more than other stacks in mid-range DFS GPP contests and Cash games across the Week 12 slates.

Players to pair with: A.J. Dillon (RB) and (Pat Freiermuth)

After back-to-back subpar performances, Joe Burrow is understandably priced down to $6,200. In his previous five starts, he had been averaging 24.26 DraftKings points per game before he hit the wall. This week Burrow is facing his AFC North Division rival Big Ben and the Pittsburgh Steelers. In his previous meeting in Week 3, Burrow was efficient, completing 14 of 18 with three touchdown passes, two of which went to Ja’Marr Chase ($7,300). The Steelers hobble into Week 12, impacted by injuries to key defensive starts on the line and in their secondary. I expect Chase to continue his dominance this week, seeing between 8-10 targets and scoring once.

On the other side of the ball, Diontae Johnson ($6,600) has been consistent this season, scoring double-digit DraftKings points in every game. His lowest point total is 11.7 on the season and he has scored over 22 points three times. I’m comfortable rolling with this stack in small to mid-range GPP field tournaments. DFS is all about stacks and this is one of the better ones in Week 12.

Cam Newton is back!! Last week he showed out, passing for two scores and taking a 24-yard scamper to the house for another. After scoring 26.1 points in his first start since returning to Carolina, Cam is priced up only $100 from $5,100 to $5,600. He’s one of the best values on the slate and should be able to put up points through the air and on the ground against the Miami Dolphins defense. Through 11 games, the Dolphins have given up 3,199 passing yards (most in the NFL) and 21 total touchdowns to quarterbacks.

D.J. Moore’s ($6,200) 28% target share is fifth-highest for wide receivers and looked good last week with Cam. After three straight sub-10 point performances he bounced back with a touchdown and 16 DraftKings points last week against Washington. The Dolphins rank 31st against wide receivers this season, giving up over 42 points per game, making Moore a solid GPP play with upside. Running it back with Jaylen Waddle ($5,900), the seventh most targeted wide receiver this season makes the most sense. Waddle has 57 targets in his last 6 games and is averaging 1.72 points per target, up from 1.49 the first five weeks. This run-back stack attack is best utilized in large GPP field tournaments.

Jalen Hurts ($7,300) has been the model of consistency this season, scoring at least 20 DraftKings points eight times this year. This week he matches up against the New York Giants, who have given up 20 total touchdowns to quarterback this season. Mile Sanders ($5,100) returned to the lineup last week after his stint on the Injured Reserve (IR) with an ankle injury and rushed for 96 yards on 14 carries. The Giants have been downright dreadful against running backs this season, giving up 1060 rushing yards, 573 receiving yards, and 12 total touchdowns. Stacking Hurts and Sanders is unconventional but makes sense given the Eagles’ success lately running the football. I’m playing this stack in larger field GPP tournaments.

Mac “Attack” Jones (YES!! I did just invent that nickname) is set to sore on Sunday against the reeling Tennessee Titans. Mac Jones ($5,400) is quietly putting together a solid rookie season for the Patriots, currently fourth overall according to PFF with an 86.9 rating. The Patriots have been getting it down primarily on the ground this year, utilizing multiple running backs each week. But the Titans are much better against the run than the pass this season, giving up on average per game 43 points to wide receivers and only 20 to running backs.  Surprisingly, the Patriots rank 4th in explosive plays per game this season. Kendrick Bourne ($4,900) has receptions of 46, 48, and 75 yards this season. I expect Bill Belichick and the Patriots to pass the ball more in this matchup, making Jones worthy of stacking in deeper field GPP tournaments and Cash games.

Carson Wentz has scored 17 or more DraftKings points in eight of eleven games this season. Not surprisingly, his usage has in large part been dependent on games script and how effective Jonathan Talyor has been on the ground. Wentz has an impressive 15 to 2 touchdown to interception ratio the last seven weeks, meaning that when called upon, he has been effective. The game script for this matchup is trending towards “Shootout” territory with a 43.5 team total and two of the highest-scoring teams in the NFL. Stacking Wentz with Michael Pittman is the optimal play if you want to maximize your game stack and not break the bank.

Running it back with Chris Godwin ($7,000) and an underpriced Rob Gronkowski at $4,400 provides you with a concentrated game stack with the highest slate breaking potential. Gronk returned last week from his back injury and looked like his old self, catching six of eight for 71 yards. I’m playing this stack in all small to mid-range GPP tournaments and in Cash games.

Jimmy Garoppolo‘s demise may have been overstated. You didn’t hear it from me, but he’s PFF’s highest-ranked quarterback since Week 8. (Ducks. Changes name and leaves the state). Don’t look now, but Jimmy G. has seven of nine games with at least 15 or more points and four performances over 18 points. Priced at only $5,700, Jimmy G. stacked with any of his receiving options is on the table. Stacking him with Brandon Aiyuk is one way to differentiate yourself from the field and gain leverage over Deebo Samuel truthers. Aiyuk has had one more target than Deebo over the last four weeks, and at $5,300, he’s priced $2,600 cheaper though averaging the same points per dollar value.

Justin Jefferson might have most of the attention-grabbing big plays in the Minnesota Vikings offense, but Adam Thielen is quietly DraftKings 12th ranked wide receiver with 171.6 points. Thielen has been most effective in the end zone this season, leading the Vikings with an 8.1% end zone target share and eight receiving touchdowns. If you want to pay up for Jefferson, you swap him out and then find a value running back like Miles Sanders or Melvin Gordon. I’m comfortable playing this stack in mid-range to large GPP field tournaments.

Tyrod Taylor ($5,300) scored 19.1 DraftKings points last week, racking up two rushing touchdowns to go with his 107 passing yards. This week he faces the New York Jets secondary, who haven’t been good this year. They have given up over 2,800 passing yards and 17 total touchdowns to quarterbacks through 10 games. Taylor’s most dangerous weapon is easily Brandin Cooks. His 87 targets are only eight less (95) than all the other wide receivers on the Texans team. His 29% target share is down from its impressive 33% earlier this season, but it’s still good for the top 3 in the NFL. It’s no secret that Cooks is criminally underpriced at $5,800. He will be popular. Game stacking him is one way to avoid the chalk.

My run-back for this stack includes Ty Johnson ($4,300), who will be filling in for an injured Michael Carter and Jet’s rookie wide receiver speedster Elijah Moore ($5,600). Ty Johnson has been primarily used as a PPR back this  After a slow start to the season, Moore has exploded the last three weeks with  27, 13, and 32 point performances. Moore’s 24.4 average over the last three weeks is best in the NFL over that same stretch. I’m playing this game stack in large GPP field tournaments. This is a nice low-usage choice among the DFS stacks in Week 12.

Justin Herbert’s ($6,600) sophomore campaign has been filled with ups and downs. He’s scored 30 or more points four times. But he has also failed to score 20 points five times so far this season. Which Herbert are we going to get this week? Vegas is leaning towards the under, setting the line at -2.5 for Denver. I’m with the betting public, who has pushed the line to -2.5 Chargers. Herbert has been extremely effective when targeting Keenan Allen ($7,400) this season, sporting a 70% completion percentage. His 106 targets are good for third-best for all wide receivers great news for those looking at Week 12 DFS Stacks.

The Chargers are an unabashed run funnel this season. Brandon Staley is a smart coach that understands that death by a rushing thousand paper cuts isn’t as terrible as being bludgeoned over the top with a deep bomb for six. I fully expect both Gordon and Williams to have good games on the ground in this matchup. Gordon has the goal line rushing upside and has averaged 16 points per game the last four weeks. While Williams has averaged under 10 points per game in that same four-game sample. I’m rolling this stack out in Cash and in small field GPP tournaments.

Matthew Stafford ($7,100) was looking MVPish three weeks ago, after back-to-back poor performances he’s looking to rebound against Green Bay and Aaron Rodgers this week in a cold and snowy Lambeau Field. Obviously, Cooper Kupp is the most expensive play on the whole of the DraftKings main slate at $9,600, but his 27.7 points per game warrant the price hike. The Packers are rare home underdogs in this game. Unfortunately, Aaron Rodgers is battling what he has described as “COVID toe” which will limit Rodgers’ ability to avoid Aaron Donald and Von Miller. I expect a heavy dose of A.J. Dillon ($5,900) in this game as the Packers try to keep the ball out of Stafford and co’s hands. I’m rolling this stack out for high stakes smaller field GPP tournaments. Week 12 of the NFL season has opportunities for stacks on stacks across all DFS formats.

Fantasy Football Players to Stream for Week 12: Streamers at Quarterback, Tight End, Kicker, and Defense
Propping It Up Over On BettorFantasy