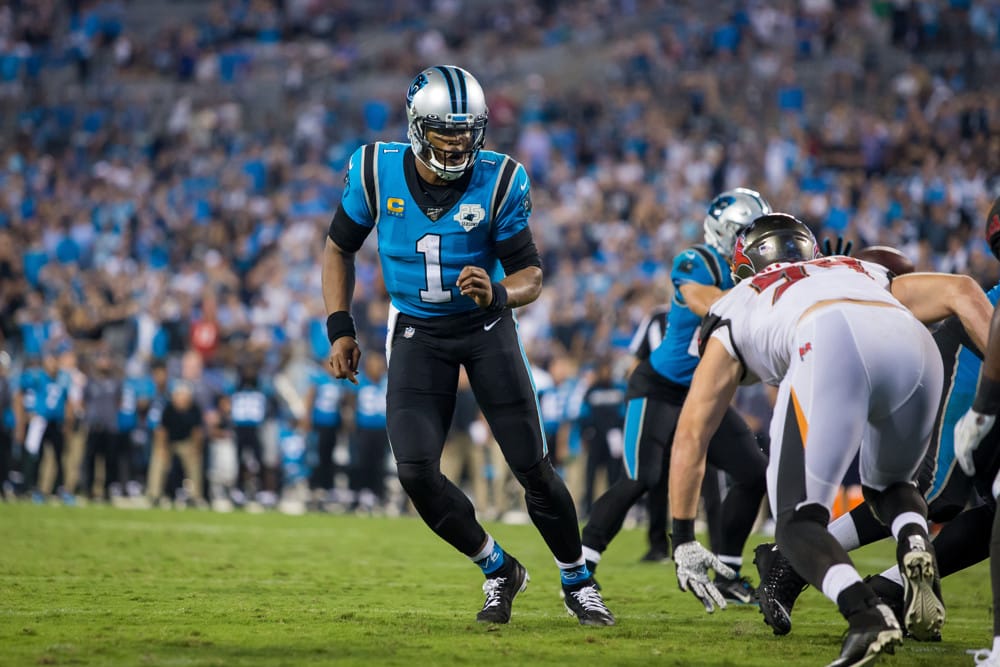 We are into the final stretch of games before the fantasy playoffs. Every point from here on out matters and you are going to need the best players to plug and play this week. Let’s dive into some of the best Week 11 Streamers.

Superman is BACK!! Just days from returning to the Carolina Panthers, Cam Newton had two total touchdowns in his first touches as quarterback for the Panthers. Matt Rhule has come out since and announced that Newton will start for the team on Sunday. In his return to Carolina, Newton will see a plus matchup vs the Washington Football Team who is giving up the second-most fantasy points to opposing quarterbacks. With weapons around him to elevate his play, Cam should be a viable streaming option this week. He is currently rostered in 36% of leagues.

Daniel Jones makes his return this week to Tampa where it all began for him. In his two previous meetings vs the Bucs, Jones has had solid fantasy days. Now, he is getting a Tampa Bay defense who has allowed a number of good fantasy days to opposing quarterbacks. Not to mention, Jones is projected to have a full arsenal of weapons at his disposal. The most important piece is LT Andrew Thomas returning to the lineup. In games where Thomas got a full workload, Jones is averaging 23.8 fantasy points. Jones should be a good option for your Week 11 Streamers as he is only rostered in about 30% of fantasy leagues.

For a majority of this season, Adam Trautman has been disappointing for those who actually drafted him. However, this week could be a nice game for him as he gets a Philadelphia Eagles team who is allowing the most fantasy points to opposing tight ends this season. Since week five, Trautman has seen over 80% of snaps every week. He also has six or more targets in three straight games. This should be the matchup the Saints look to exploit and get him involved. Trautman is available in about 95% of fantasy leagues.

Cole Kmet has fought all season to carve out a permanent role in this crowded tight end room. He has led the tight ends in target all season. He also has six or more targets in the last three games. Now, he gets a Baltimore Ravens defense that is fifth in fantasy points to the position. Expect Justin Fields to continue to find his security blanket. Kmet is available in about 88% of fantasy leagues.

What?! Against the Bills?! Hear me out now. The Colts are going to test the Bills in this game. They are top ten in limiting teams to explosive pass plays. They are going to make Josh Allen and the Bills offense have to drive down the field to beat them. This is going to lead to mistakes. I expect them to limit their drives to minimal, if any points, and to produce turnovers. The Colts are available in 44% of leagues. You can consider them as one of the more intriguing Week 11 Streamers.

Randy Bullock gets a favorable matchup against the Houston Texans. They give up the 24th most points to the position. Do not expect the Texans to just lie down during this divisional matchup. They are going to play up for this game and force the Titans into some tough spots. I see the giving up more field goals opposed to touchdowns this week as they do not have to worry about Derrick Henry or Julio Jones this week. Bullock is rostered in about 53% of fantasy leagues.

Playing the Detroit Lions has its perks for Chase McLaughlin. They give up the most fantasy points to the position. The Browns are coming off a subpar performance last week and will look to bounce back. They will have plenty of opportunities to score as the Lions’ offense will struggle to stay on the field with a back up quarterback at the helm. McLaughlin is rostered in 19% of leagues and needs to be considered in the Week 11 Streamers conversation.