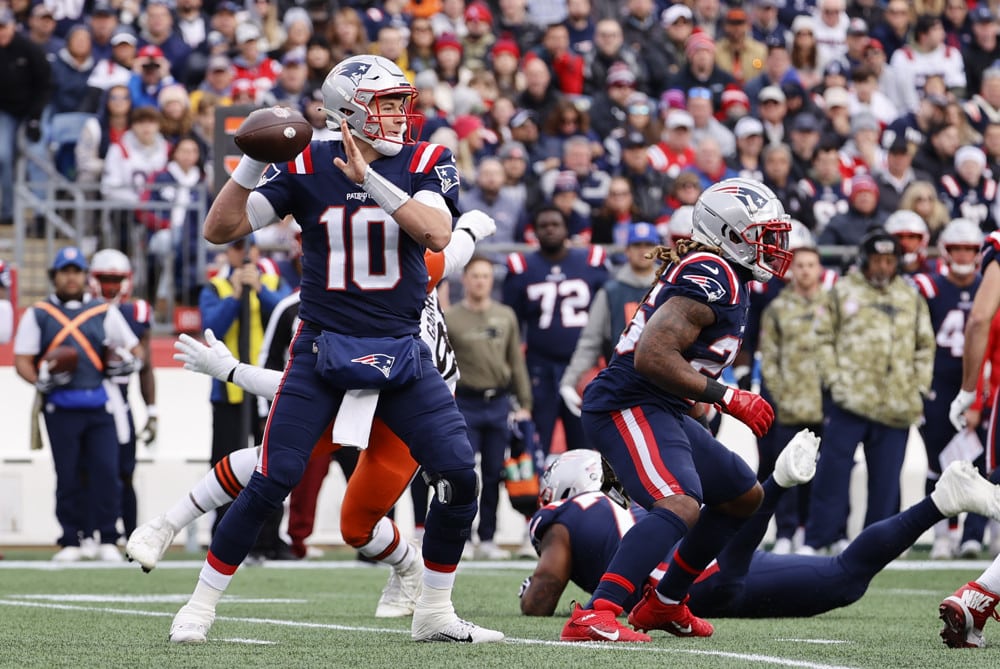 As another week comes to a close it is time to start looking at your waiver wire again. Maybe more injuries popped up and more of your rostered players busted, you need help. As we get closer and closer to the playoffs it becomes harder to find breakout players. It is hard to find players that can impact your roster. However, fear not, we have you covered. Who is going to help you make your playoff push?  Even better, who will help you win your championship?  Take a look at the players you should be looking at for the Week 11 waiver wire.

The Mac Jones era hasn’t exactly gotten off to a fast start. The rookie had 5 passing touchdowns and 4 interceptions in the first 5 weeks of football. However, in the last 5 weeks, Jones has 8 passing touchdowns and only 2 interceptions. Jones had another good performance in Week 10, throwing 19 for 23, 198 yards, and 3 touchdowns. He continues to build a good rapport with his receiving group and continues to get better. If you’re streaming QBs or looking to replace yours, Jones is worth considering on the Week 11 waiver wire.

NFL Rookie of the Year Mac Jones with his third TD of the game pic.twitter.com/4Bc7VDWZko

Speaking of the Patriots, Kendrick Bourne is quickly becoming Jones’ favorite target. Bourne has received a 20% target share the past 3 games and in Week 10 had his best game yet. Bourne hauled in 4 catches for 98 yards and a touchdown. If Jones and Bourne continue to be on the same page, Bourne could be a very valuable addition to your roster. And at only 5% rostered, he’s likely available on the Week 11 waiver wire.

Looking for more action? Check out the latest in NFL betting.

Rostered in almost half the leagues Robby Anderson has been a big disappointment for the most part. While he’s had 16% of the target share Weeks 1-9, he hasn’t converted those targets into much. Anderson has a 33% average catch percentage. But there might just be hope after Week 10. Anderson was targeted 19% but made much better use of his targets. Having 4 catches for 37 yards and one touchdown, Anderson was second in yards to only Christian McCaffrey. Whether P.J. Walker or Cam Newton starts at QB, Anderson still has a lot of upside as a flashy player that could help your team for the Week 11 waiver wire.

If you’ve read this column before, you’ve heard Rhamondre Stevenson’s name already. However, at only 14% rostered, it’s hard to omit him from the Week 11 waiver wire. As the RB2 to Damien Harris, Stevenson got a chance to show what he had as the RB1 in Week 10. Stevenson took twenty carries for 100 yards and 2 touchdowns, adding four catches for 14 yards. Harris will likely be back as the RB1, but Stevenson should have earned more work from his impressive performance. In Week 9 he also had ten carries for 62 yards, showing he can help move the ball down the field for the Patriots.

There goes the rookie!

Since joining the Jaguars in a trade, Dan Arnold has been one of Trevor Lawrence’s favorite targets. Arnold has 20% target share the past 5 weeks and 286 yards. Tight end is always a tricky position if you don’t have one of the top five guys, but Arnold’s floor is solid with the target share he is receiving. Arnold has yet to score a touchdown on the Jaguars, but the more he stays involved, the more likely he is to get one. If you’re looking for tight end help or depth, Arnold is an excellent Week 11 waiver wire target.

Since TE Dan Arnold joined the #Jaguars the passing targets have gone:

On Thursday Julio Jones was placed on injured reserve and if Week 10 is any indication, Marcus Johnson will do just fine filling in for him. Johnson received 22% of the target share, catching 5 passes for 100 yards. This included a fifty-yard big play. While he didn’t score a touchdown in Week 10, Johnson showed he can step in and make an impact on the field with his big-play ability. If you had Julio or are looking for wide receiver depth, Johnson is most likely available. He’s not a plug-and-play guy yet, but he’s worth a Week 11 waiver wire stash.

Even though Van Jefferson hasn’t played in Week 10 yet, if he’s available in your league he’s worth a look. Robert Woods is out for the season and while the Rams added Odell Beckham Jr., Van Jefferson already has rapport built with Matthew Stafford. Van Jefferson has received 14% of the target share this year with Woods. Beckham may take some time to learn the Rams playbook and even so, Van Jefferson’s big-play ability brings great upside. He is currently averaging 17 yards per catch and has had six games when his longest catch is more than 20 yards. Jefferson might be able to step in and fill some of the 21% target share loss from Woods.

A bettor put $500 on Van Jefferson to score the first touchdown of the game.

As stated previously, the tight end position can be a tricky one if you don’t have one of the top-tier players. If you’re looking to the Week 11 waiver wire for some tight end help, Cole Kmet has gotten increasingly more involved in the Bears passing game. Averaging a target share of 19% through the year, Kmet has received 25% in the last two games. In Week 9 before the bye, he had 87 yards and looked like Justin Fields’ go-to target. Look for the Bears to use the bye week to scheme more ways to get Kmet involved, making him a great waiver wire target.

The Lions’ offense doesn’t exactly inspire fantasy football managers. But if you’re looking for a desperate play, Amon Ra St. Brown should only continue to improve in his career. He’s an especially intriguing prospect in dynasty leagues. In Week 10, St. Brown received 25% of the target share, taking 4 catches for 61 yards. He has yet to score a touchdown this year but I feel some regression could take place and he’ll get a few before the end of the year. He wouldn’t be my top target, but in deeper leagues, Amon Ra St. Brown could be a Week 11 waiver wire target to consider.

After being cut and then signed shortly after, DeSean Jackson takes his talents to Las Vegas. While he isn’t the same DeSean Jackson as he used to be, Jackson still possesses great speed and route running. It may take him a few weeks to get involved in the Raiders offense but once he does Jackson is always good for some big plays. The big-play ability makes him an intriguing Week 11 waiver wire target. Derek Carr is third in the league in passing and the Raiders will continue to throw the ball. Consider stashing Jackson to see if he starts making an impact, and potentially help you in your fantasy football playoffs.