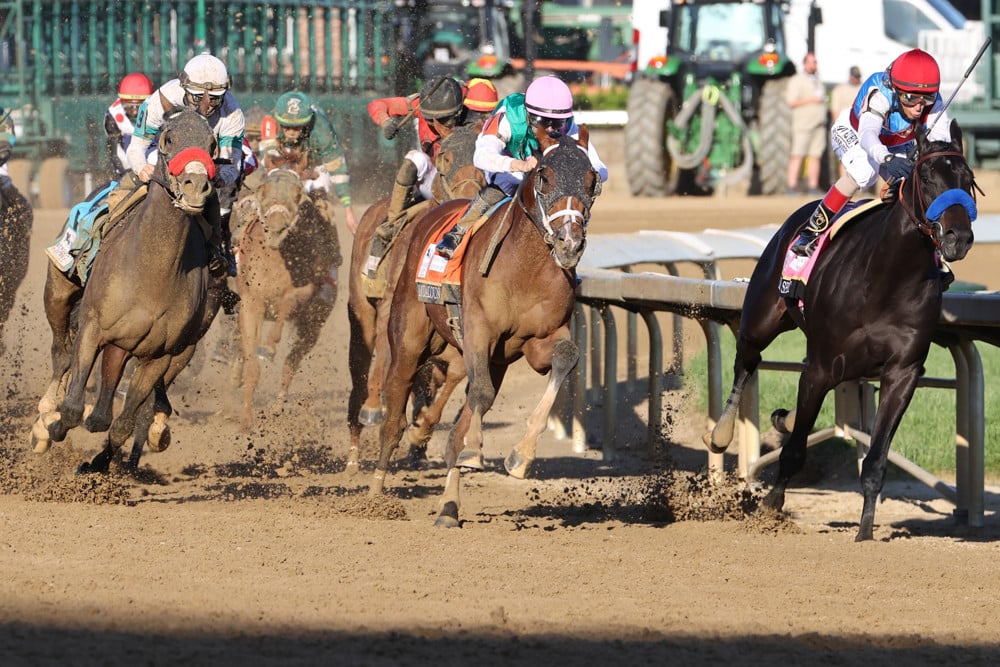 Del Mar Fairgrounds, north of San Diego, hosts the two-day showpiece that is the Breeders Cup 2021 over Friday and Saturday. The track is perched on the shining sea and truly is where the turf meets the surf. Opened by Bing Crosby amongst others in 1937, this is the second-largest horse racing venue in the States behind Santa Anita Park.

Both the dirt and turf are one mile around with a short run-in of a furlong and a half. It’s known as a fair track, horses can come wide and from the back.

The meeting takes place over two days. Friday sees five Championship races for the two-year-olds, with nine races on Saturday for horses aged three and up. It’s a great chance to get some parlays and exotics on the go, so let’s see what we can fetch out.

Pizza Bianca +600. Nicely bred type with one win from two starts. Was second last time in a Grade 2 at Woodbine and that form puts her in the frame.

Bubble Rock +800. Brad Cox and Irad Ortiz team up here. Cox has a couple in the race but this looks his best shot. I think she’ll be on the front end which is the place to be in a big field.

Koala Princess +700. Two from two and Breeders Cup machine Joel Rosario has the mount. Was visually impressive at Kentucky last time, mowing down her rivals. I think she’s the one.

Echo Zulu -105. I’m not going to win any prizes for originality on this pick but sometimes you just need to get in and get out. Use this as a cornerstone in parlays with some of the shorter-priced selections listed elsewhere here. By Gun Runner, Echo Zulu is undefeated and Steve Asmussen is keeping her improving. Bet.

Gamine -150. Truly one of the stars of this meeting. She’s unbeaten at this trip but is a prohibitive price and I think we can get her turned over.

Bella Sofia +300. This horse has a similar running profile to the favorite and I think will serve it up at the front end. She’s relatively unexposed and has won at this level for Rudy Rodriquez. An improver. Get her in your pouch and set yourself up for the day.

Ce Ce +600. If the front two cut each other’s throats, Ce Ce can be the horse to benefit.

Golden Pal +175. A Wesley Ward speedball who won at this meeting last year. Had his colors lowered at Royal Ascot but there’s no shame in that. He came out of the stalls last year like he’d been shot out of a cannon. A similar performance wins today.

Lieutenant Dan +1100. I’ve included this horse as he is two for two at the track. There’s a lot to be said for local knowledge over a sprint trip. Hasn’t faced this level of competition but I think will run in the money.

Glass Slippers +600. An honorable mention here for Glass Slippers who did the biz for us last year at +1000. She’s a different animal at this time of year but at five years old I think the youngsters might outrun her here.

War Like Goddess +450. Bill Mott trains this for the Americans. She looks a shaky favorite in the face of stiff international competition. Not for me.

Loves Only You +600. Japanese raider who has proved versatile over various trips and surfaces. She looks a real fly in the ointment and could prove to be too good.

Audarya +600. British challenger who won this last year, trained by the shrewd James Fanshawe. This horse oozes stamina and I only hope that the short run-in doesn’t catch her out. A lot of ticks in a lot of boxes, my eye is repeatedly drawn back to her. I expect her to get a lovely tow into the race before getting to the front down the stretch. Like.

Letrushka +150. The best filly in America, she should win this. Still seems to be improving and I don’t see why she won’t get it done on a track that suits.

Shedaresthedevil +700. Has a win over Letrushka to her name. She has a similar running style to the selection and I think that could knock her out of the money. Fade.

Malathaat +500. Without troubling the favorite I can see her running a good race and helping us to get paid.

Tarnawa +175. A worthy favorite in a race traditionally dominated by the Europeans. She attempts to make history by beating the boys for a second consecutive year. The turf here is slated to be firm and I think she’d prefer slightly more cut underfoot.

Domestic Spending +300. Chad Brown inmate who looks to be the best of the home contingent. Hasn’t traveled this far before but I see nothing to suggest that he won’t get the trip. Lightly raced this year – I think he has been laid out for this. Huge chance.

Yibir +800. Another European charge primed for a big run. Still only three, he has won his last two races in fine style. William Buick takes the ride and I like his chances.

Knicks Go +275. Three wins in a row for last year’s BC Mile winner. Has never gone on this trip and there is a lot of top-class oppo in this field. I don’t like him at the price.

Essential Quality +350. Top class and tough as boots. The only race in which he’s been beaten was the Kentucky Derby. Has had a busy year however and I think a fresher horse could win.

Hot Rod Charlie +550. Doug O’Neil knows how to get them ready and Hot Rod Charlie has been great this year. Essential Quality looks to have had the measure of him in the past but this is a home game and he could reverse the form.

Medina Spirit +750. Wrote himself into SGPN folklore with a 20/1 Kentucky Derby win only for an arse-cream scandal to strip him of the glory. Bob Baffert would love to win with this horse. If he jumps smartly he can dictate the race, and good luck Pappy, good luck getting by.