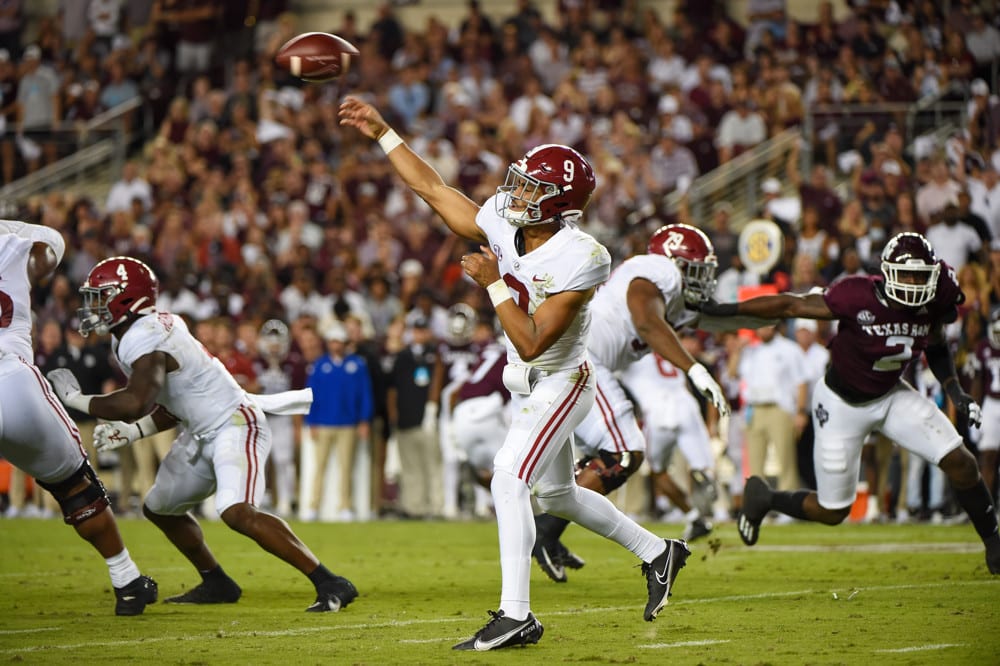 As we all know, the Heisman Trophy is the biggest individual honor a player in College Football is able to win and there are a number of great names to have been able to count the award as being something that they were able to win.

Of course, the prize is awarded to the best college player of the season and has become one of the biggest college football betting markets as many sports betting punters love to try and see if they can successfully predict who will be crowned the Heisman Trophy winner.

We may have only got through six weeks of the NCAAF season so far, however there are a number of players who could already be firmly placed in the hunt for the award this season due to their performances for their respective colleges.

We take a look at some that will be in the race (in no particular order), with most of them likely to be remaining in the discussion once the season starts to come to its conclusion.

Cincinnati Bearcats quarterback Desmond Ridder has had an impressive start to the season, although he is still thought of as an outsider to win the Heisman Trophy and not, necessarily, because of what he is doing on the gridiron.

He continued to perform really well against Temple in their recent clash, however his 259 throwing yards and three touchdowns might not be enough given the level of competition he is facing within his Conference.

Ohio State football followers were once begging for anybody but C.J. Stroud to start at quarterback, however that adversity appears to have helped the player grow and lead the team at an unexpected level.

Since coming back from an injury, he has been nothing short of exceptional, with his performances against Rutgers and Maryland seeing Stroud throw for five touchdowns in both games, taking his overall total to 18 in five starts for the season.

Admittedly, when he is surrounded by the star talent that Ohio State can boast, then it perhaps gets a little easier, however he has still had to perform when on the field. He will face tougher challenges in the future, but if he successfully navigates those, then he could be a contender for the Heisman Trophy.

It can be hard for any player in a position other than a quarterback to win, however Smith showed it is possible last season with his performances. It seems Kenneth Walker has taken that on board as the running back races to the award.

Walker is posting some rather huge numbers in each of his games so far, having only failed to rush more than 100 yards in two games so far. Indeed, he has been instrumental in helping Michigan State to remain unbeaten over the first six weeks.

He ran for 232 yards and a touchdown, which included a 94-yard effort, against Rutgers and is on pace to record 1,800 rushing yards for the season. If he can get that total to near 2,000, then there is no reason not to think of him as a Heisman Trophy contender.

Ole Miss quarterback Matt Corral is one of the top picks to win the award this season, as he has got the college program flying high – something that has not happened for some time. There is no doubt that he will get recognition for it.

However, their schedule will get significantly harder in the coming weeks and Corral will need to be at his very best if he is to lead Ole Miss to victory. If he does, though, there is no denying his nomination.

Many would argue that the Heisman Trophy is Bryce Young’s to lose at this stage. The quarterback has already been exceptional this season, having thrown for 20 touchdowns and at least three scores in four of five games, having never failed to throw for less than two, either.

With Alabama scheduled to face just one more ranked side this season until the SEC title match, the conditions are favourable for Young to cement his place as he should be able to put up some big numbers moving forward.