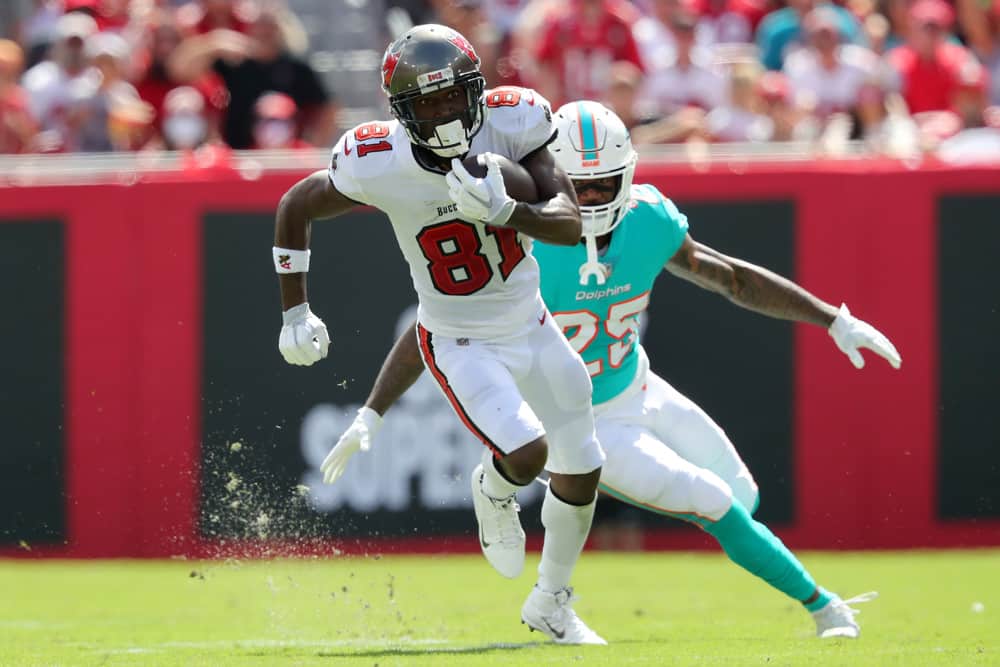 Once again, the reigning Super Bowl champions grace primetime television and set up these Week 6 NFL Thursday Night Football DraftKings picks. The Bucs enter the game 6.5 point favorites with an implied total of 29 points. On the other hand, the Eagles are only expected to score 22 points in this game. This all should lead to a fair amount of fantasy points up for grabs. Of course, we have seen Tampa Bay explode offensively so pretty much anything is to be expected as we enter this weekday showdown matchup.

It goes without saying that both quarterbacks are in play for this slate. Tom Brady will likely throw up a big number with his arm. Jalen Hurts will use his legs along with his arm to try and do the same. Both of Brady’s top receiving options are also going to be hot ticket plays. So, with all of these already in play, here are some more names to consider as you put together your lineups.

Just five games into his rookie season, it’s safe to say DeVonta Smith has been thrown into the fire. He finds himself the unlikely leader of a young receiving corps entering only his sixth game as a professional. So far Smith leads his team in targets and receiving yards. He began his season with a solid performance catching 6 of 8 targets for 73 yards and a touchdown. The following two weeks saw him cool off. In that span, he only managed 5 catches for 44 yards and no trips to the end zone. That trend turned around two weeks ago as the rookie enjoyed his best outing of the season. Against Kansas City, Smith blew up for 122 yards on 7 receptions. Last week, he secured 7 more passes, this time for 77 yards. He seems to be trending in the right direction and primed for another quality start.

Considering he and his team will be facing the league’s worst team against the passing game, Smith has the potential for a huge game. Entering Week 6, the Buccaneers find themselves dead last in terms of passing yards surrendered. A lot of that has to do with their league leading rush defense. Opposing teams are averaging just under 49 yards per game on the ground against Tampa Bay. On the other hand, the Bucs are allowing 314 passing yards a game. Of course, it’s hard to run the ball when you are playing from behind. Which is exactly what almost every team has done against Tom Brady this season. It’s exactly what the Eagles will be doing this week as well. As such, Jalen Hurts will be forced to air the ball out. His favorite target will benefit from that and make this a profitable play.

All of a sudden, it’s 2018 again and Antonio Brown has once more become a fantasy relevant name. Leave it to Tom Brady to give fantasy managers back one of their favorite players. In three out of his four games since joining the Bucs, Brown has achieved double digit fantasy points. His climb back to glory was helped immensely by last week’s outing against the Dolphins. The former Steeler great caught 7 of his 8 targets for 124 yards and 2 touchdowns. It was his second appearance of the season in which he went for over 120 yards and a touchdown. The narrative that Brady himself fought to bring Brown to Tampa seems to have legs. By and large, he’s keeping pace with Mike Evans and Chris Godwin week to week.

Despite his big game potential, Brown still finds himself as the lowest priced of the three. He’s a full $1,200 less than Godwin. Granted, the matchup this week versus the Eagles should not be taken for granted. The Eagles rank inside the top three passing defenses in the league through the first five weeks of the season. Only Tyreek Hill has caught more than 100 yards against them and to be fair, he’s done that to a lot of teams in his career. All things considered though, Brady has the ability to carve up opposing defenses much like Patrick Mahomes. With that in mind, we have seen what an all-star caliber quarterback can do against this defense Brown should benefit from that and do more than enough to cash this Week 6 NFL Thursday Night Football DraftKings pick.

The time for Leonard Fournette truthers to take their victory laps is now. Over the last two weeks, Fournette has seized control of the Tampa backfield. Against New England, he registered 23 total touches including 20 carries and 3 receptions. All told, he racked up 139 combined yards. The only thing missing from his night was a touchdown. That was not the case last week against the Dolphins. He took Miami for 67 yards on 12 carries finding the end zone from five yards out in the third quarter. Again he accounted for more than 40 receiving yards. He’s proving more and more that he can be trusted as a three-down back and the alpha rusher for the Buccaneers. With double digit fantasy performance in his last two games, Fournette is gaining momentum.

That momentum will serve him well healing into a choice matchup against a weak Eagles run defense. Heading into Thursday night, Philadelphia is allowing 142 yards per game on the ground. Last week, they allowed Chuba Hubbard to rush for 101 yards. The week before that, Clyde Edwards-Helaire hung 102 yards on them. They were five yards away from also allowing Ezekiel Elliott to surpass the 100-yard mark. What’s more, the Eagles are allowing an average of six receptions to opposing running backs for close to 40 yards per game. The numbers work out for this to be a highly fantasy friendly game for Fournette. Two teams have scored more than 40 points against Philidelphia. Tampa Bay just accomplished this last week against Miami. No matter the situation, Fournette should continue to play a large role in this high octane offense.

No real Philadelphia tight end has asserted full dominance over the position yet this season. Both Zach Ertz and Dallas Goedert have each turned in a couple of double digit fantasy games. Even still, neither have been a fully reliable week-to-week option. That said, Ertz seems to be pulling slightly ahead to reclaim his spot as the Eagles top tight end. Over the last three games, Ertz has seen more targets than Goedert. As a result, Ertz has outperformed his teammate in two of those three games. The only exception to that came against Kansas City when Goedert managed to find the end zone while Ertz did not. Even in that game, Ertz had more yards and more catches, he just failed to score.

His value sees a giant upswing going against the worst passing defense in the league. It gets an even bigger boost now that Goedert will miss this game on the COVID-19 list. The Eagles will need to lean on every available pass catcher to stay in Thursday night’s game. Hopefully he can break through for his first career touchdown against the Buccaneers. Let’s face it, with the major players in this game grouped at the top of the price list, you need a swing at value. At his price, Ertz should make for a more comfortable bat with which to take that swing. Toss him in a fair share of your Week 6 NFL Thursday Night Football DraktKings lineups.