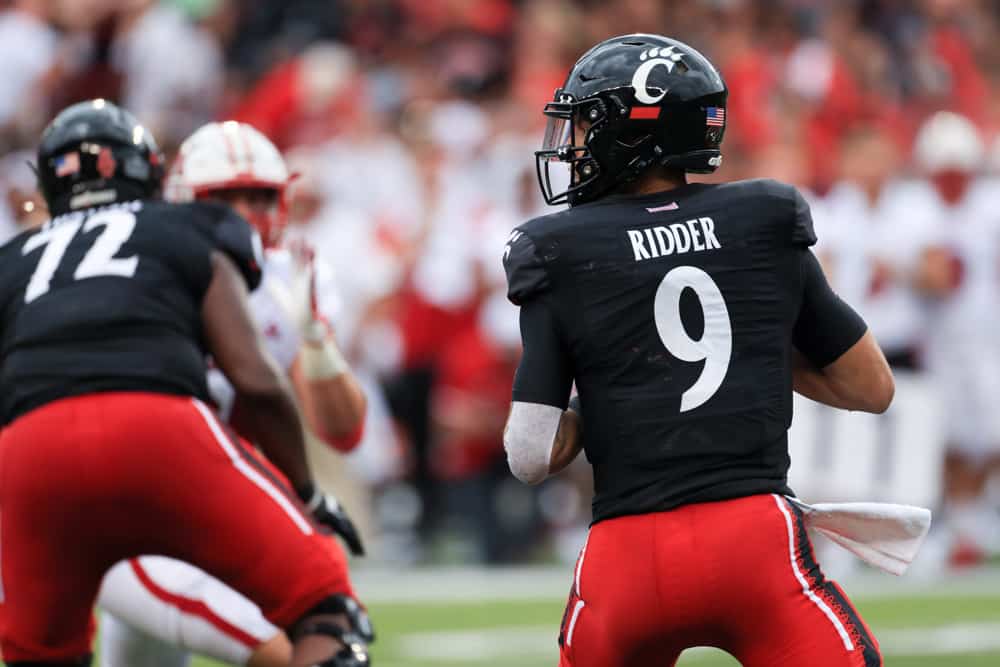 Welcome back College Football Fantasy fans. Week 3 is on the horizon and as usual, for each position, I will highlight my favorite expensive option, my favorite middle-of-road option, and my favorite bargain bin player. It’s an impressive slate of games so buckle up and let’s get that money!

With so many great QB options for Saturday’s main slate, getting this position correct will be critical. For my money, my big dollar QB to roster will be Desmond Ridder. This isn’t a knock on CJ Stroud, Spencer Rattler, Bryce Young or others, but Rudder comes in a bit cheaper and should have a monster game.

The matchup at Indiana isn’t great but the Bearcat QB is basically matchup proof. He’s a dual threat guy who regularly puts up 30+ fantasy points. Cincy has blown out two lesser opponents this year so this weekend will be the first game where Ridder will need to make plays for all 4 quarters. That’s exactly what he will do.

Think you know who will win it all? Check on the latest College Football National Championship Odds.

There were times last year where D’Eriq King was at least $8K or $9K. First off, I was surprised to see him heal up quickly enough to take the field vs Alabama in Week One after a gruesome injury late last year. As predicted, King and the Hurricanes struggled and it certainly wasn’t a fantasy performance to remember.

In Week 2 vs App State, we started to see glimpses of the old D’Eriq King with the veteran QB running for 80 yards. He still didn’t put up production like it was 2020, but he’s getting closer to 100% and getting more confident each week. This might be the game where he makes people remember how special he is.

McKenzie Milton has finally been given the outright starting QB job at FSU. This week vs Wake Forest, he shouldn’t have to look over his shoulder at Jordan Travis and when he might come onto the field. Plus, one more game under his belt to shake off rust has to be viewed as a positive.

I understand that Milton was not very impressive last week vs Jacksonville State so rostering him is a gamble. At only $6.1K, it’s a roll of the dice vs a Wake Forest D that finished 91st in the nation a year ago. I like those chances and you can save some coin to spend elsewhere.

It was just one game, and it was against a Northwestern defense with a lot of new pieces, but KW3 had himself quite the opening day. The Wake Forest transfer ran for 264 yards and 4 Tds on 23 carries. Last week, Sparty played Youngstown State and the MSU starters weren’t needed in the second half so don’t be concerned about his Week 2 stat line of 7-57-1 TD.

The Miami D has had a couple rough games vs Alabama and App State to begin the year and might be exhausted by the time the 2nd half comes around. Through two games, the U is currently giving up 137 yards on the ground which places them 71st in the country. Meanwhile, the Spartans just had a nice, walk-in-the-park game and should be ready to pound the rock come Saturday.

I’ve been a Christian Beal-Smith believer for a couple seasons now and with the departure of Kenneth Walker, he’s finally getting the chance to be the lead dog in the Demon Deacon backfield. Through the first two weeks, CBS has posted rather pedestrian numbers but he wasn’t needed much in blowouts vs ODU and Norfolk State.

Wake Forest has Florida State coming into town this weekend so expect a close game where the home team will rely on their top RB throughout the game. At an affordable price, Beal-Smith should carve out a nice game.

Rostering a USC RB over the last couple of seasons has been a dicey proposition. The Trojans still have a committee approach with Vavae Malepeai and Keaontay Ingram (5.3K), but the former has been more effective so far. Through two games, Malepeai has 28 carries for 159 yards while Ingram has 25 carries for 130 yards.

Both backs will get touches, but Malepeai is less expensive and USC should find success on the ground at Washington State. At only $4.7K, the USC RB offers a decent ceiling and is a nice Flex play option.

David Bell is an absolute monster and has been for a couple seasons for the Boilermakers. Last year, Rondale Moore may have received the headlines, but Bell still averaged over 8 catches and 100 yards per game. This year, the junior WR already has 14 catches for 225 yards and 3 TDs in just two games.

David Bell evades the entire defense to put more points on the board for @BoilerFootball . pic.twitter.com/ogBB3TeTqo

I had Wilson in this spot last week when he was only $5.9K. No need to overthink this – at only $500 more dollars, I’ll gladly roster him again. Against Oregon, the Buckeye WR caught 8 balls for 117 yards and a TD. Ohio State may not need to pass the ball as much this week against Tulsa, but Garret Wilson will still get his.

The senior from Oklahoma City has been a reliable threat in Buffalo’s passing attack for a few years now. Last week vs Nebraska, Williams pulled down 8 catches for 93 yards which followed up a 5 catch for 96 yards performance vs Wagner. He’s the Bulls WR1 and he’s at an attractive price tag.

Buffalo has a ranked Coastal Carolina team coming into Western NY this weekend and while it will be a tough game, the Bulls passing game should find some success. As a 14 point dog against a high-scoring Chanticleer team, Buffalo will be forced to pass to keep up. Plus, Quian Williams is an off-the-radar play that can help differentiate your roster from others.

College Football Picks for every game each week