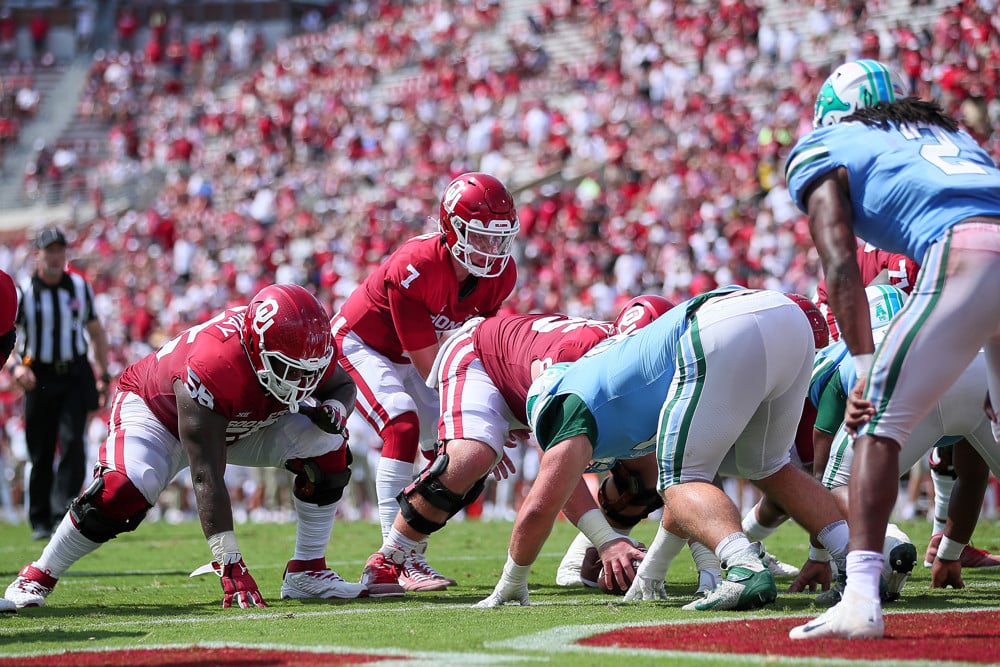 We are back again with our weekly College Football picks. Along with my picks for every game against the spread, here I highlight the best bets for the five biggest matchups each week.

Let’s get into it!

On paper, this is a huge game between two big-name programs with large and rabid fanbases. However, what is Nebraska football in 2021 and can the Cornhuskers even keep this ballgame close? Sure, they have two straight wins after the Week Zero debacle at Illinois but they weren’t overly impressive in either. Nebraska knocked off Fordham 52-7 and beat Buffalo 28-3. In both games, it took Scott Frost’s squad too long to pull away. This was especially true against Buffalo where it was a 14-3 game going into the 4th quarter.

As for the Sooners, they waxed Western Carolina (in a game that should never be scheduled) 76-0 but struggled in Week 1 against Tulane, only winning 40-35. In fact, Oklahoma only managed three second-half points against the Green Wave. In general, it was a sloppy game for Oklahoma that might have served as a wake-up call.

Looking at this week’s matchup, people (including myself) were touting Oklahoma this year because they were supposed to have a real live defense for a change. That wasn’t the case against Tulane so it’ll be interesting to see how much success Adrian Martinez and the Nebraska offense can have. The Sooners will score a lot of points and we’ll see if Nebraska can keep up.

At the end of the day, Nebraska will do just enough to cover. The Cornhuskers haven’t shown me anything over the last few years to even remotely think about a money line play but the spread is too high. Oklahoma wins behind a nice day from Spencer Rattler by a final score of 42-21 or so.

My Pick: Nebraska and the Over

After getting pummeled by Iowa in Week One, the Hoosiers rebounded nicely last week – cruising past Idaho 59-14. While it was a dominant performance, Idaho was a bad 2-4 FCS squad in the Spring and Indiana got two of their first-half TDs on special teams. Tom Allen has done an excellent job in Bloomington but this team may have been overrated coming into the season.

Losing 34-6 to Iowa to start the year only reinforced my concerns about the Hoosiers. Indiana was limited to just 233 yards of offense and QB Michael Penix Jr threw three INTs, two of which were pick-sixes. Expect the Hoosiers to also have their hands full with an excellent Cincinnati defense that was top 10 in the nation a season ago.

Riding that terrific D, the Bearcats have outscored their first two opponents (Miami-OH and Murray State) by a combined score of 91-21. Granted, a top 10 school should have no problems with the aforementioned MAC and FCS programs. I’ll give Cincy a pass for the two cupcakes to start the year since they travel to Indiana this week and follow it up with a trip to Notre Dame.

Relive all of the biggest plays from today's 42 to 7 win over Murray State at Nippert Stadium.

Cincinnati was no fluke last year going undefeated in the regular before dropping a close bowl game to Georgia. They deserve a top 10 ranking and being a team from the American Athletic, they’ll be licking their chops for a shot at the Big 10. Bloomington will be a hostile environment but an early kickoff helps. Plus, is there any other QB you’d want leading your team into enemy territory other than senior Desmond Ridder?

I have faith in the Bearcats. They’ll look like a top team in the country and they’ll take down Indiana on their own turf. This line started at -2.5 and has crept up a point or two but I still like Cincinnati.

My Pick: Cincinnati and the Under

This is a rematch of the SEC Championship game from a year ago where Bama knocked off the Gators 52-46. Both teams look drastically different in 2021, but it’s still two SEC heavyweights going toe-to-toe in one of the most iconic stadiums in all of college football.

With that said, Florida doesn’t exactly reload as fast as Alabama these days. Dan Mullen might have his team 2-0 but those victories were against Florida Atlantic and a really bad USF team. Taking over for Kyle Trask, Emory Jones has struggled mightily – only throwing for 2 TDs with 4 INTs to start the year. The other Gator QB, Anthony Richardson, may be taking over the reins but he’s dealing with a hamstring injury himself.

Additionally, the bad UF defense from a year ago is still allowing yardage to opponents at will. Both FAU and USF accumulated more yardage and scored more points on Florida than Miami did against Alabama. Last but not least, there’s no Kyle Pitts or Kadarius Toney on this Florida team. Through two games, I’m still left unsure of who the top rusher or pass-catcher is.

I don’t mean to bash Florida, but you can probably figure out my lean in this game. The Crimson Tide was dominant against Miami and I expect them to go on the road and take care of business. Bryce Young has looked the part in his first two starts and like usual, Alabama has skilled players all over the field to go with a rock-solid defense. I’m on Bama and I’m on the Over.

My Pick: Alabama and the Over

Here’s the primetime game of the week. Be sure to tune in because this one should be a dandy. If you listened to me or read my columns leading up to the season, I mentioned more than once to throw away the 2020 Penn State season. Amidst a bunch of opt-outs and an 0-5 start, the Nittany Lions actually turned things around and won their last four games. Regardless, I’ve mentioned that the 2021 version will look more like the 2019 PSU team that went 11-2 than last year’s 4-5 squad.

So far, so good. Penn State went on the road in Week One and knocked off the Wisconsin Badgers, 16-10. After that impressive performance, the Nittany Lions took care of business vs Ball State, 44-13. QB Sean Clifford has been playing efficient football, the RB duo of Noah Cain and Keyvone Lee is one of the best in the Big 10, and WR Jahan Dotson will be in the NFL next year. Oh yeah, the defense has been stellar so far too.

On the other hand, Auburn has beaten Akron 60-10 and Alabama State 62-0. I suppose those lopsided scores are impressive but Akron is one of the worst FBS teams in the nation and Alabama State isn’t very good on the FCS level. Needless to say, they haven’t been tested yet. QB Bo Nix has been around the block a few times but has never impressed and Bryan Harsin is in his first year as HC of the Tigers.

Nearly 25 years later, Penn State will welcome his son, QB Bo Nix, to Happy Valley for the White Out in the first regular season matchup between the two schools. pic.twitter.com/8Er0tMevMA

Looking at this matchup, I love the fact that Penn State already has a tough win under their belt and then got a cupcake game before the Tigers. You know its going to be a whiteout in Happy Valley and I have doubts Auburn will be ready for such an environment. Lay the points and take the Big 10 school.

My Pick: Penn State and the Under

This is too many points, right? In Charlottesville last year, UVA took down UNC 44-41 in Overtime. Sure, the Tar Heels will be looking for revenge, but one could argue UNC was better a season ago while UVA should be improved this year. Most people may be tuning into Auburn/Penn State, but don’t forget about what should be another shootout in the ACC.

North Carolina struggled on the road in Blacksburg, losing 17-10 in Week 1. The Sam Howell for Heisman train got derailed almost before the season began. To Mack Brown’s credit, they re-grouped and looked good beating Georgia State 59-17 last week. Howell tossed the rock for 352 yards and 3 TDs while rushing for 104 yards and 2 more scores. Other than Howell, the Tar Heels still need skill position players to step up and fill in for all of those guys from 2020 who are now playing on Sundays.

UVA enters the game 2-0 after beating William and Mary and Illinois by a combined score of 85-14. It took a while for the Cavaliers to put away the Illini but that’s still an impressive W over a Big 10 squad that beat Nebraska. I’m a Brennan Armstrong believer and he’s destined for a big game but the key might be the improved UVA defense and if they can reel in Howell.

Bronco Mendenhall has been the head coach of UVA since 2016 and has a 4-1 record vs UNC over those 5 seasons. The key to last year’s victory was limiting the Tar Heels, and their backfield consisting of Javonte Williams and Michael Carter, to less than 100 yards on the ground. If UVA can make UNC one-dimensional again, they have a chance to not only cover but win outright. Give me the points and those Wahoos.

My Pick: Virginia and the Under