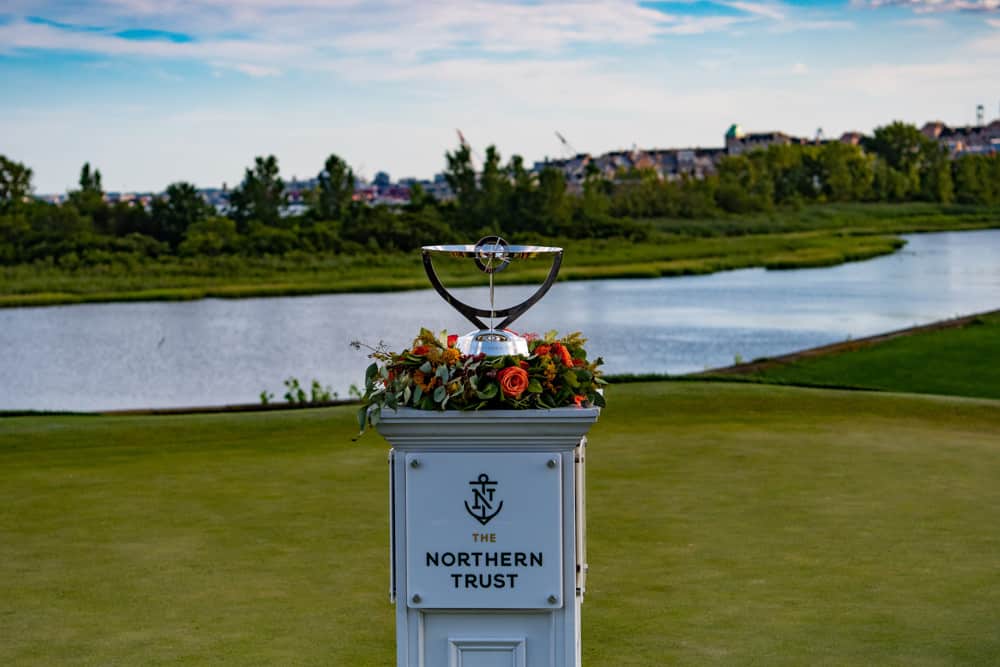 The Northern Trust Preview – The Field

As mentioned previously, the Top 125 in the FedEx Cup Standings after the Wyndham Championship entered the playoffs at The Northern Trust. Leading the way into the playoffs is Collin Morikawa, who enjoyed a tremendous season. Morikawa won the Open Championship and the WGC – Concession to boost him into the pole position. At a golf course that demands driving accuracy, he’ll be a strong contender this week.

Hot on his heels is Jordan Spieth, who has risen from the ashes after a long slump. Starting with the Waste Management Phoenix Open, Spieth’s performance tee-to-green improved dramatically. With his ball-striking on point, expect him to make a strong run towards the FedEx Cup title at East Lake.

Jon Rahm also makes his return to the FedEx Cup after his second bout of COVID. If it weren’t for COVID, Rahm would be leading the FedEx Cup standings by a mile. An almost assured victory at the Memorial was snatched when he withdrew after the 3rd round, costing him 500 FedEx Cup points. He also missed out on crucial FedEx Cup points when he didn’t play the WGC-FedEx St. Jude classic. Like he did at the U.S. Open, Rahm looks for redemption in the playoffs.

For the last few years, The Northern Trust has bounced between TPC Boston (a favorite of this author) and several golf courses in the New York City area. The PGA Tour wanted to kick off its first round of the playoffs in two big East Coast markets. However, starting next year the first round of the FedEx Cup will head down to Memphis in order to cater to the playoffs chief sponsor. For the foreseeable future, the Boston/NYC swing on the PGA Tour calendar is put on pause.

As for Liberty National Golf Course, it opened in 2006 after the redevelopment of a New Jersey toxic Superfund site along with the mouth of the Hudson River. Paul Fireman, the former CEO of Reebok, was sitting on $600 million in cash after Adidas bought his company out. So what does a former CEO do with the giant piles of cash they received from a corporate merger? They build a really expensive golf course.

And spare no expense he did. He paid big bucks to secure a spot along the Hudson River with tremendous views of lower Manhattan and the Statue of Liberty. His goal was to create the best golf course in the world no matter how much it cost. He hired the Lindsay Newman Architecture and Design group to build a beautiful glass-paned clubhouse. And he brought in the team of Robert Cupp and Tom Kite to design a snaking 18 hole layout featuring wall-to-wall bentgrass. In all, the golf course cost $250 million to build.

So did $250 million truly build the best golf course in the world? Yes and no.

Let’s start with the positives. The visuals of the golf course are tremendous. Those who wish to warm up on the luxurious driving range are greeted with a full view of the financial district and Lower Manhattan skyline. And the skyline is visible across most holes on the course, including the most picturesque hole in the Par 3 14th. It’s a popular spot for fans to enjoy the golf and the views. It’s also the backdrop of a Morgan Stanley commercial featuring Justin Rose. 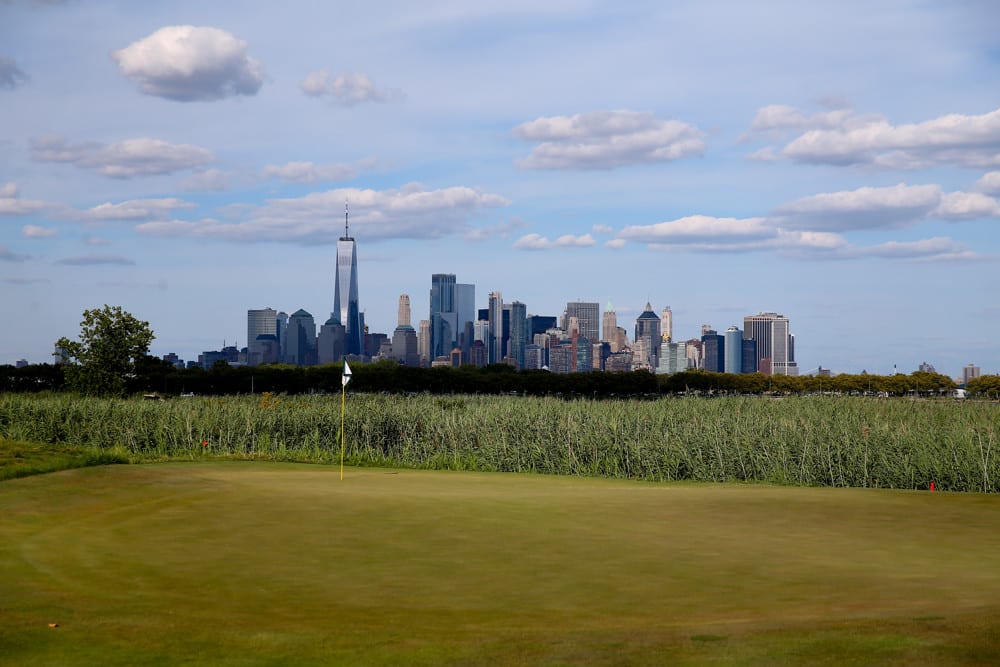 The facility and the golf course itself are of the utmost quality. As mentioned earlier, the club spared no expense to build a beautiful glass-paned Club House that overlooks the 18th green. It looks more like an art gallery from the outside than a place to go grab drinks after your round: 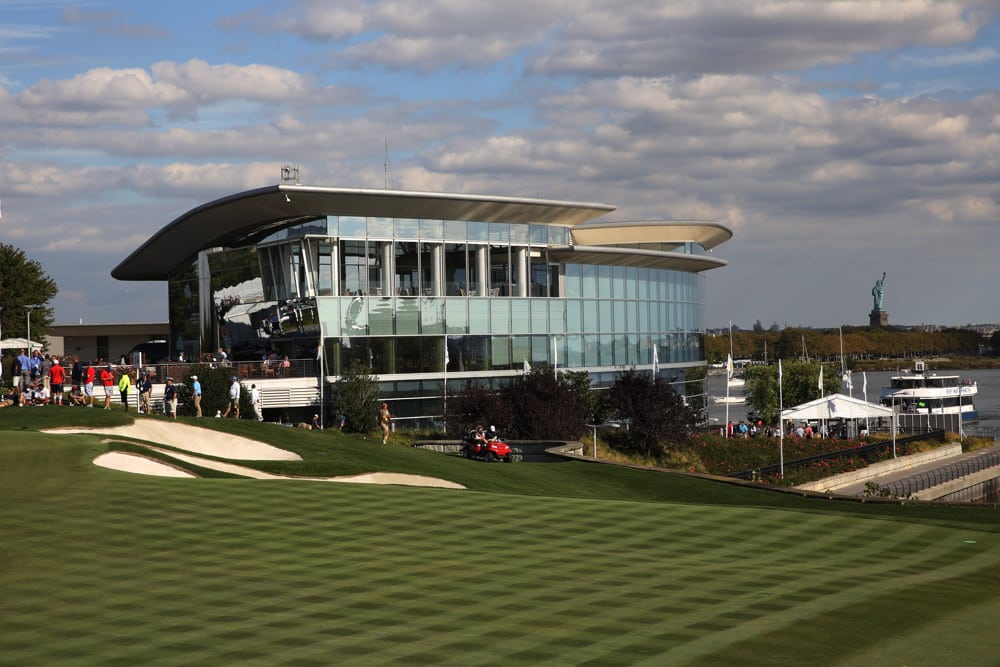 The golf course is wall-to-wall bentgrass, one of the best and most expensive turfs to both play on and manage. And it has the look of a New Jersey coastal marsh with fescue rough and wetlands well off the fairways to gobble up errant shots.

All this money was well spent to attract high-profile events to the golf course. It first brought in the 2009 Barclays to host the first round of the playoffs. After the 2009 tournament when Tiger Woods complained about the greens, it underwent a slight renovation before the 2013 Barclays. It then was selected to host the 2017 Presidents Cup, which resulted in a 19-11 drubbing by the Americans. And it again hosted The Northern Trust in 2019. From this perspective, Paul Fireman certainly got his money’s worth.

I guess the answer to “Is this the best golf course in the world” comes down to what you value most. Do you value immaculate playing conditions, breathtaking views, and state-of-the-art facilities? Or do you value how the golf course is designed itself?

If you value the latter, then this certainly is not the best golf course in the world:

To apologize for Tom Kite and Robert Cupp, they certainly had their work cut out for them. This was a toxic, flat piece of wasteland before they dug their claws into it. Architects have two options when faced with uninteresting land – keep it as is, with significant earth moved to create interesting and challenging greens and green surrounds. Or add unnatural water hazards and over bunker the golf course in order to present a challenge to the player.

Tom Kite and Robert Cupp chose the latter route. In all, this golf course has 98 sand traps and 13 water hazards. Half the holes bring water into play on either the tee shot or the approach shot. Almost all holes feature tall heather and marshland that await errant shots. And fairway bunkers hug close to the short grass to gobble up balls that run through the fairway.

Of all the holes, the split fairway 12th is probably the most interesting hole on the golf course:

Centerline bunkers always give professionals fit. From the back tees, four bunkers about 270 yards out bisect a 60-yard wide fairway into two. There’s a bunker about 365 yards away from the back tee that awaits balls down the right fairway, but it won’t be in play for anyone this week. Players have a decision to either lay back of the centerline bunkers for a 150-160 yard approach into the green. Or they could try and take on either the left or right fairway for a comfy wedge to stuff one close. In 2019, most players opted to take on the centerline bunkers with driver to much success. It was the 5th easiest hole of the week.

But all in all, this is a golf course seen lots of times on the PGA Tour. It’s in immaculate condition. The hazards and water create some bothersome tee and approach shots. But there’s nothing unique or spectacular about the design of the course itself. The main appeal is certainly in the visual eye candy.

Liberty National is a Par 71 and runs 7,370 on the scorecard. It features three Par 5’s, two of which are reachable while the third is only reachable for the longest of hitters. Three of the Par 3’s play close or in excess of 200 yards, while the Par 3 14th plays at just over 150 yards. And six of the 10 Par 4’s play under 450 yards. The short Par 4’s are heavily protected by either significant bunkering or water hazards. The greens are about 4,600 square feet in area, or about average for PGA Tour standards. The bentgrass greens run about 12 on the stimpmeter, which is a little faster than average on the PGA Tour.

Liberty National has hosted four professional events. It was the site of a FedEx Cup playoff event in 2009, 2013, and 2019. And it was the host of the Presidents Cup in 2017. Golf has changed significantly since 2009 and 2013, and relying on match play results is highly misleading. Therefore, most of this section will focus on the results of the 2019 Northern Trust (with Strokes Gained data for the tournament). That should help preview what will happen at this year’s Northern Trust.

A very mixed bag leaderboard. Of these players, only Jon Rahm and Rory McIlroy are players that would constitute bombers. While Justin Rose and Adam Scott possess some length, they’re more regarded as well-rounded players. But a lot of players who are more known for accuracy, iron play, and putting dominate the leaderboard. They include Patrick Reed, Abraham Ancer, Brandt Snedeker, Jordan Spieth, Louis Oosthuizen and Ian Poulter.

So how were they able to rise to the top of the leaderboard? It was primarily on the back of strong iron play. Nine of the top 11 players on the leaderboard finished inside the Top 25 in Strokes Gained – Approach on the week. About 43% of all approach shots were between 175-225 yards. This makes sense given the length of the Par 3’s, as well as two shorter Par 5’s. Another 30% of all approach shots for the week were between 100-150 yards. This also jives with six Par 4’s under 450 yards, half of which are under 400 yards. The gambit is strong wedge play, the ability to score on Par 5’s and successfully score well on the longer Par 3’s.

But the field overall hit fairways at high rates. The driving accuracy % on the week was just under 68%. The fairways overall are pretty wide for PGA Tour standards, and players sometimes took less than driver to lay short of hazards and bunkers. While it’s important to keep the ball in play at Liberty National, loading up on accurate players isn’t the way to go.

A few golf courses on the PGA Tour feature bentgrass greens, similar driving accuracy and greens in regulation %’s, similar scoring and/or lots of hazards. These might help preview how this year’s Northern Trust leaderboard will shape up. They include the following:

All these venues don’t necessarily favor one style of play. Golfers of all walks of life can take whatever part of their game they excel at and perform well in the tournament. But a solid and efficient tee-to-green game is a must both at these comparable golf courses and at Liberty National.