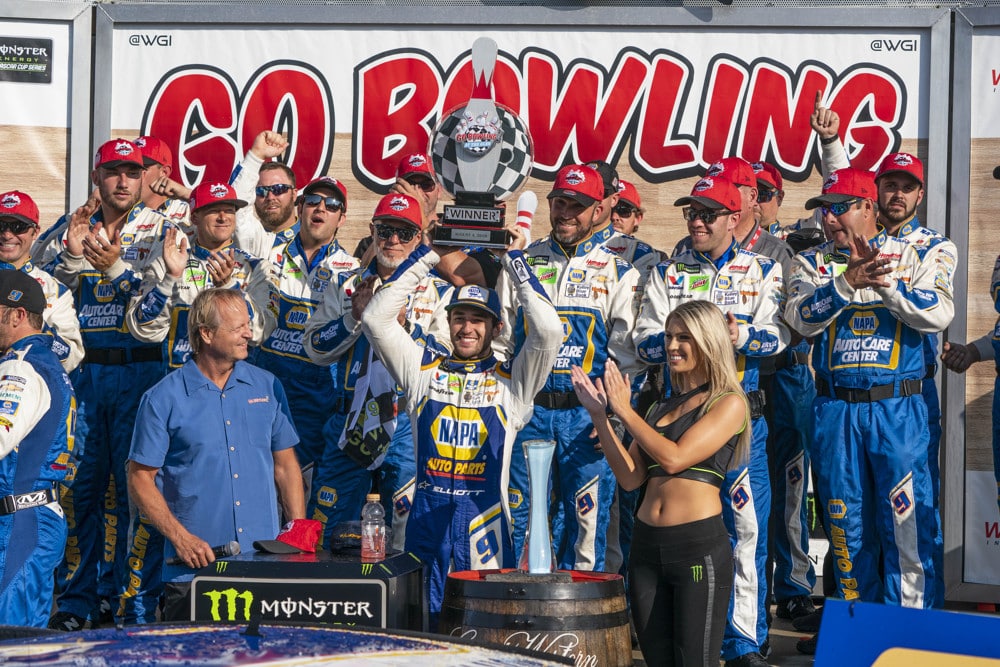 Drivers are set to take to Watkins Glen, New York on Sunday for the running of the Go Bowling At The Glen. It will be their first race back after a three-week break. This marks the fifth road race of the season. It also marks the return of the New York road course after a year away due to Covid protocols in New York last year. Everyone should be well-rested and anxious to get back to racing. That should make for another exciting NASCAR slate and a great opportunity to have some fun on DraftKings this Sunday.

Road-course racing has always had its “ringers.” Recently though, Chase Elliott has made the rare crossover to achieve a dangerous hybrid lethal at both traditional and road races. His name has been etched on the trophy at Watkins Glen each of the last two seasons this race took place. In 2019, the last running of the Go Bowling At The Glen, Elliott dominated this track in every sense of the phrase. He led 80 of the 90 total possible laps. In addition, he turned in 33 of the fastest laps of the race. His 2018 victory included 52 laps led with 26 of them considered the fastest laps. Elliott’s success at Watkins Glen extends back to his days in the Xfinity Series as well. In his two starts in the minor circuit, he has two Top 10 finishes.

As stated earlier, Elliott has been a force to reckon with this season on the road tracks. A costly slip early in the season at the Daytona Road Course was his only misstep. After that, he rebounded to win at the Circuit of the Americas, finish second at Sonoma, then brought home the checkered flag at Road America. These have not been last-lap miracles either. Over the course of these races, Elliott has been in front of the pack for 105 total laps. His reputation as a road warrior is not without merit. He will once again be a favorite to win, as well as a favorite to dominate this race.

You’ll have to go back a few years to find the last time Joey Logano was relevant on this track. Since his second place in the 2016 season, Logano has failed to finish better than 23rd in three attempts. A couple of wrecks and a bad pit gamble kept him from a respectable finish in that stretch. There is a silver lining though as in 2015, he was able to bring his #22 car across the finish line in first place. Also in his favor is the fact that he’s been able to do well in the past in spite of his starting position. The year he won, he rolled off the grin in 16th place. The following year, he began the race in seventh and finished the Go Bowling At The Glen runner up.

This season has treated Logano much better in terms of road course finishes. It will be this logic that drives this pick. In three out of the four road races so far this season, Logano has finished inside the Top 5. His worst outing was his 15th place outing at the Road America track in Wisconsin. The Pennzoil Ford Mustang is safely in the playoffs and can afford to take some big swings in order to take home the checkered flag this weekend. Logano will look to keep the momentum of his fourth-place finish almost three weeks ago in New Hampshire. Running out a couple of tournament lineups with a Logano pivot could set you up nicely should he do well in New York.

The book on Ryan Blaney at Watkins Glen does not contain very many chapters. Despite that, at least a couple have been interesting reads. As a Cup driver, Blaney has made four career starts on this track. Two have come with the Wood Brothers #21 machine, with the other two by way of his current ride. In that span, he’s enjoyed two Top 10 finishes, including a Top 5 in the last race here in 2019. It should also be noted that in his lone Xfinity start at Watkins Glen, he produced a fourth-place outing. In that race, he started third and actually led 13 laps along the way.

Maybe not so quietly, Blaney is putting together a decent season. He’s already in the playoffs thanks to his win in Atlanta. He rides the momentum of 11 Top 10 finishes so far this season. This includes five out of the last seven races. Add to that a Top 5 in the All-Star Race. It’s been a tough go of it for Blaney though at road courses this season. His best finish on a non-traditional track was his tenth place outing in Sonoma. That said, the Menards Ford has a nice head of steam going into this weekend. It’s not a wild bet that Blaney will ride that momentum to a solid finish again in the Go Bowling At The Glen.

Another driver with limited, but successful history on this track is Daniel Suarez. In his three career starts at Watkins Glen, he’s enjoyed two Top 5 finishes. Last season was the outlier as he crossed the finish line in 17th place. In the 2018 race, he improved 17 spots from his 21st place starting position to finish the race in 4th place. In 2017, he started 5th and led 14 laps on his way to a third-place showing.

Daniel Suarez and Bubba Wallace get together, and Chris Buescher has nowhere to go. #NASCAR // NBCSN pic.twitter.com/lQjkAslzVx

This season has not been kind to Suarez and the Trackhouse Racing Team. Despite some awful finishes though, week after week, it seems the #99 car is in the Top 10 conversation. Maybe Suarez was able to figure something out during this extended rest. Hopefully, he can use this track as the start of a solid finish to his season. If nothing else, you are not needing him to win this race. You would be certainly happy with the points that come from a decent Top 5 finish for your Go Bowling At The Glen lineups.

Ask the average fan to name a driver who has three straight Top 10 finishes, with two of them being Top 5’s at Watkins Glen. You can bet that Erik Jones’ name more than likely would not be the first to come to mind. In spite of that, Jones has been at the front of the pack in all three of his career starts here. His best finish came the last time drivers ran this race in 2019. That outing had him rolling off the starting grid from the 14th position. It ended with him crossing the finish line in fourth place.

In rostering Jones, you are hoping for him to be able to find his way back to the front again this week as he’s done in the past here. You’re hoping for that, because he’s had a disappointing 2021 season so far. He’s logged only two Top 10 finishes this season. That said, he has had at least one good run on a road course this season. His 12th place showing in Sonoma represented his best road outing this year. He’s a risky dart throw, but one that could pay off given his favorable history at this track.