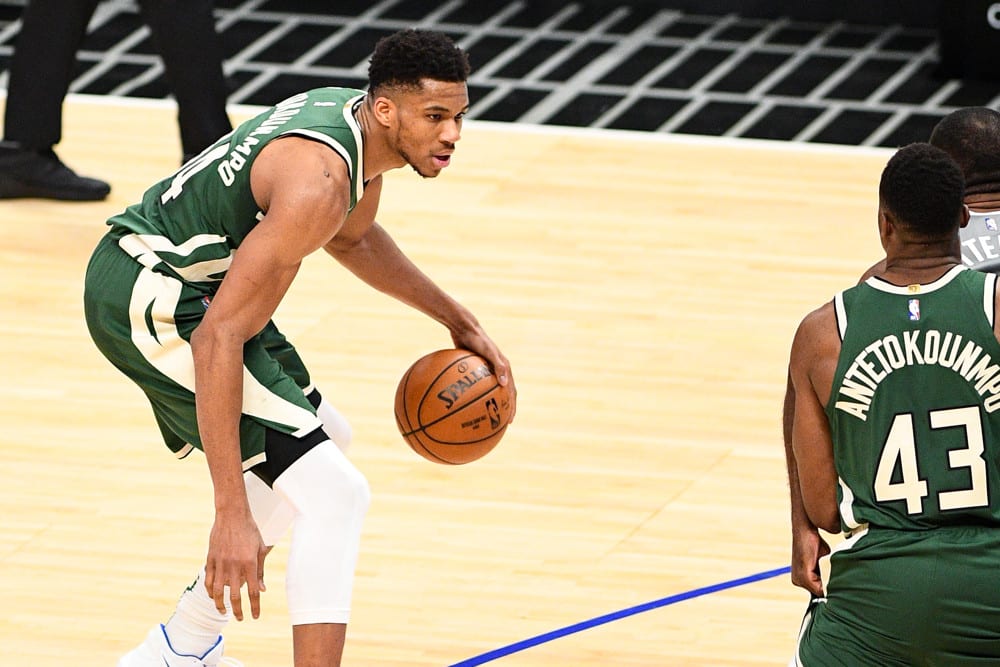 The season may be nearly over, but we’re not done hitting you with NBA DFS Picks yet! There are still at least two games on the docket, which is more than enough to add a bit of green to your wallet. So let us take you through the lineup that we think is going to get it done in Game Four.

Paul is as cheap as he’s been in a DFS slate for these finals. This is largely due to the fact that he had a lackluster Game Three in Milwaukee. He failed to grab a rebound in that contest and was ice cold from three-point range – resulting in a lowly 33 fantasy points. But don’t let that detract you from the fact that in the three games prior, he averaged 53.8 fantasy points. That total is actually more than Giannis Antetokounmpo snagged in that same span. Not to mention in each of those games he was just a dime or two away from a double-double bonus. I consider him an obvious bounce-back candidate for Game Four and a smart play as your captain.

In the first home finals game in Milwaukee since 1974, The Greek Freak put on for his city. He put the team on his back with 41 points and his customary double figures for boards. You have to imagine that he’s going to try to carry the team again for Game Four, so even at the steep price tag, he’s worth rostering here. It’s also worth noting that despite snagging 69.3 fantasy points in Game Three, he didn’t have a single block. It was only the second time this post-season that he hadn’t blocked a shot. This means there actually might be room for growth on that number.

Sure, this is another high price NBA DFS pick, but the trajectory for Holiday is something to love. Even if Giannis dominates the scoring for Milwaukee, Holiday is the perfect pairing to play with him. He doesn’t need a big scoring total to rack up the points because he fills out the stat sheet. He has back-to-back games with 5+ boards, 7+ dimes, and at least one block and one assist. On the occasion he gets hot from three, he would wind up a value play even at this cost.

In Game Three, Jae Crowder was the only member of the Suns to shoot for a high percentage. He went 6-for-7 from the field, all of which were three-pointers. With the rest of the team shooting poorly from three, the Suns looked to him and he logged some extra minutes. I like to think that he earned those minutes in Game Four as well. With the Bucks coming out hard at home and jumping out to a lead, the Suns may need to shoot themselves out. Of course, Devin Booker is likely their first option to help out with that, but he went 3-for-14 from the field on Sunday. So I have a little faith that they’ll be leaning on Crowder at least enough to make him a nice play here.

You’re going to be pretty hard-pressed to find a player in an NBA DFS slate that logs 30+ minutes and costs this low in a showdown lineup. Some of that is because Connaughton is a relatively small part of the Bucks offense. However, at just $4,2o0, the volume of chances will be there for him to be worth it. He’s always good for at least a couple of three-pointers and is usually hovering around five rebounds. He also broke out on Sunday with four assists, which is pretty rare for him. If he were to even get half of that, the price tag here would be worth it.

If you want to play a lot of the bigger dogs as I have in this lineup, you need a value play that you believe in. Since the playoff started, Frank the Tank hasn’t been much of an NBA DFS pick thanks to some really limited minutes. However, the ACL injury for Dario Saric opens things up for him a bit. If there is foul trouble for Deandre Ayton or even if he just wears down a bit during the game, Kaminsky should see double-digit minutes. Although the sample size is low, he has picked up at least a dozen points every time that has happened. And the trend for those totals is on the way up.

Make sure to subscribe to NBA Gambling Podcast on Apple and Spotify. Check out our NBA expert’s updated against-the-spread NBA picks today and EVERY DAMN DAY for EVERY DAMN GAME at SG.PN/nbapicks.