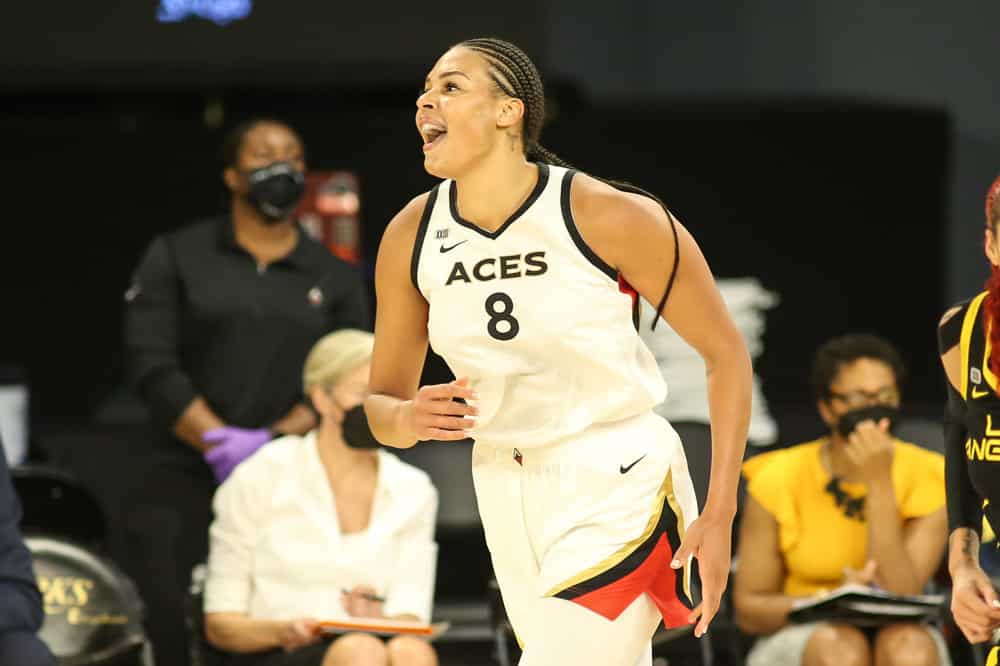 The 2021 WNBA season is reaching its halfway point. There will be a one-month break for the Tokyo Olympics, which many of the league’s stars will play in, and action will return on Aug. 15. Here are the championship odds, via Points Bet.

The Storm are a safe bet here as the overall favorites by oddsmakers. The big thing going for Seattle is they still have forward Breanna Stewart, who hasn’t missed a beat after an Achilles injury in April 2019 that kept her out for a year, and GOAT veteran Sue Bird. Stewart is top-five in the league in points and Bird is still dishing out assists at a top-five rate.

Seattle’s defense was the concern after losing former Defensive Player of the Year Natasha Howard and Alysha Clark in the offseason. They’ve tightened it up in the second quarter of the season, a product of playing and training together longer than the two weeks of training camp allowed. But be wary of taking the Storm as overall winners because their wins have been tight and though they have the veteran presence to win those, a team can only do it for so long. And there are the Aces to worry about, particularly after Las Vegas took the season series. The Storm are odds on favorites to win the WNBA Championship this year.

There’s not much separating the Storm and Aces in the lines, but the Aces might be a slight favorite after defeating Seattle twice in the regular season. The third meeting of the season was decided in overtime by three points and had WNBA Finals vibe throughout. If these two do make it to the Finals, as is likely, it could be a five-game battle that the Aces eek out.

The Aces are tough from top to bottom starting with reigning MVP A’ja Wilson, who was left to do much of the scoring herself in the 2020 WNBA Finals that Seattle swept. The reason this year is different is multifold. The addition of point guard Chelsea Gray keeps the offense clicking and center Liz Cambage is back down low to take some heat off of Wilson. Dearica Hamby, who injured her knee last year ahead of the finals, is en route to a third consecutive Sixth Woman of the Year award.

Not to mention Kelsey Plum, Jackie Young, and the sharp 3-point game from Riquna Williams.

The Aces are also in a position to earn the No. 1 seed, which goes back to being an important home-court advantage. Las Vegas showed out with Seattle in town in June.

The 2021 campaign was one to look forward to for Chicago fans, and it’s back to being a promising one after a 2-7 start. But that was because of injuries and absences of three of their presumptive starting five. After losing seven in a row, Candace Parker returned from an ankle injury and it’s been smooth gliding for this group.

Courtney Vandersloot continues to be one of the best distributors the WNBA has ever seen and Parker takes over games with double-double performances. Allie Quigley can knock down shots and the bench is deep to fill in quality minutes. Kahleah Copper earned an All-Star nod, Stefanie Dolson is heading to the Olympics for the new 3v3 format, and Ruthy Hebard is coming into her own behind Parker.

The Sky is arguably the best underdog pick for the WNBA title, particularly if there are injuries down the back end of the season to any key players for the Storm or Aces.

Jonquel Jones came back from EuroBasket the “Mother of Dragons” in the eyes of FIBA. We understand if that’s all you need to know.

Jones, a 6-foot-6 center in her fourth season, leads the league in rebounds per game and has worked on her range. She can go coast-to-coast and she can pull up for 3-pointers, averaging a career-high 4.7 from 3 and shooting a career-best 48.9 percent. Jones has been elite in every way and her impact on the team was clear when the Sun struggled while she was overseas at EuroBasket.

DeWanna Bonner continues to show out in her 11th season and Brionna Jones has been clutch. There was worry about the team when Alyssa Thomas was lost for the year due to injury. But Connecticut has shown in the past two seasons it can rattle off wins with its backs against the walls and they’re the second-best underdog choice for the title. And they might benefit the most as a top-tier team that doesn’t have a large group of players heading to the Tokyo Olympics (looking at you, Storm and Aces).

The Lynx aren’t built to win this year and taking them is a no-go. Minnesota receives most of its scoring from the frontcourt of Napheesa Collier and Sylvia Fowles. Both are heading to the Tokyo Olympics.

The backcourt has been the concern for the Lynx. Reigning Rookie of the Year Crystal Dangerfield hasn’t played up to her 2020 standard. It led the team to pick up Layshia Clarendon on a hardship waiver, and they’ve tried to keep the point guard ever since through different roster moves.

There’s a lot going on in Minnesota, but a run to the title isn’t going to be the result of it all.

A lot of personnel moves have to happen to feel comfortable taking the Mystics as a title contender. Tina Charles leads the league in scoring and has at times seemed to will this squad to victories. But they are still without two-time MVP Elena Delle Donne, who has not played since winning the 2019 WNBA title with three herniated discs in her back. She is still recovering from two back surgeries and her return isn’t set. How she’ll fare on the court is another concern.

The 2019 WNBA Finals MVP Emma Meesseman is also questionable for the rest of the season. She’s been with her Belgian national team for EuroBasket and the Olympics; if she’ll come back to the Mystics this year is not clear.

Point guard Natasha Cloud has missed time as have other players, and the Mystics have played through a short bench in the first half of the season because of those issues. At one point they played with six available bodies. For the Mystics to be a comfortable bet, Delle Donne needs to return at good form and fit in with Charles in their first season together. If Delle Donne comes back strong then the Mystics could be a sneaky pick with favorable odds to win the WNBA Championship.

The Mercury can be a confusing bunch. Guards Skylar Diggins-Smith and Diana Taurasi, the league’s all-time career leader in points, create a “Big 3” with center Brittney Griner. But they’ve played sparingly together in the bubble and in 2021 because of injuries and various absences.

The Mercury could make some noise, and in many ways, there are still question marks about this team because of Taurasi’s time away with injury. The three will be together in Tokyo on Team USA, which could help. They aren’t favorites but have a better chance of making the Finals than the Mystics at the moment.

The Liberty need a center and defensive specialist Natasha Howard back to warrant a title pick. And Sabrina Ionescu, the No. 1 pick in the 2020 draft, will need to play more herself after returning from ankle tendinitis.

Betnijah Laney, the reigning Most Improved Player, has been nothing short of phenomenal for the Liberty with her nearly 20 points per game average in the first half. She’s pulling defenders off of teammates and the Liberty are making opponents pay The young team has had good help from players like Sami Whitcomb, rookie Michaela Onyenwere and Rebecca Allen.

But without a big center down low to compete with Cambage, Wilson, and Stewart, to name a few, the Liberty don’t stand much of a chance. The Ionescu-Howard pick-and-roll connection alongside Laney’s smarts and strong shooting will be dangerous, it just won’t come together in time for it to warrant a bet.

The Wings are in a similar position to the Liberty here. Arike Ogunbowale is again one of the most prolific scorers in the league this year and has her first all-star selection to boot. Marina Mabrey is performing to an all-star level, and the frontcourt led by Satou Sabally is strong.

While the chemistry of this team has come together in the past few weeks, and the recent draft moves by the front office are already paying off, it isn’t in the cards for 2021.

The 2021 season was always going to be a tough one in Los Angeles with 13-year Sparks veteran Candace Parker and her “point gawd” Chelsea Gray leaving in free agency. It’s a transformative time for the franchise under head coach Derek Fisher and the bright spot was they still had former MVP Nneka Ogwumike to build around.

Ogwumike has played only five games because of a knee injury while her sister and fellow former No. 1 pick, Chiney Ogwumike, has also missed time due to injury. The team is 11th in scoring and last in field goal percentage, rebounds, and assists. The Sparks were strong WNBA Championship contenders once upon a time, but now the odds are ugly.

Atlanta underwent a sudden coaching change less than two weeks before the season tipoff when former Coach of the Year Nikki Collen took the position at Baylor University. That automatically puts them at a detriment and while they’ve shown promise, it’s clear this isn’t the year for them.

Courtney Williams remains one of the game’s best clutch players and Chennedy Carter, who missed time due to injury, continues her ascend. This is a franchise to keep an eye on in the coming years with new leadership in former player Renee Montgomery, but there’s nothing that can happen to make a championship bet a good idea in 2021.

Don’t do this to yourself. The Fever are last in nearly every statistical category and have struggled to make games competitive. Their 15.87-point average loss margin as of June 29 is the 12th-worst of any team in WNBA history, via Across the Timeline.

While not statistically out of the playoff picture, they’re certainly basically done. The Fever are still undergoing a rebuild after Tamika Catchings retired and have struggled to find their footing. The latest head-scratcher was releasing 2020 No. 3 overall draft pick, Lauren Cox, in June. The Fever are long shots as far as WNBA Championship odds go so avoid them.