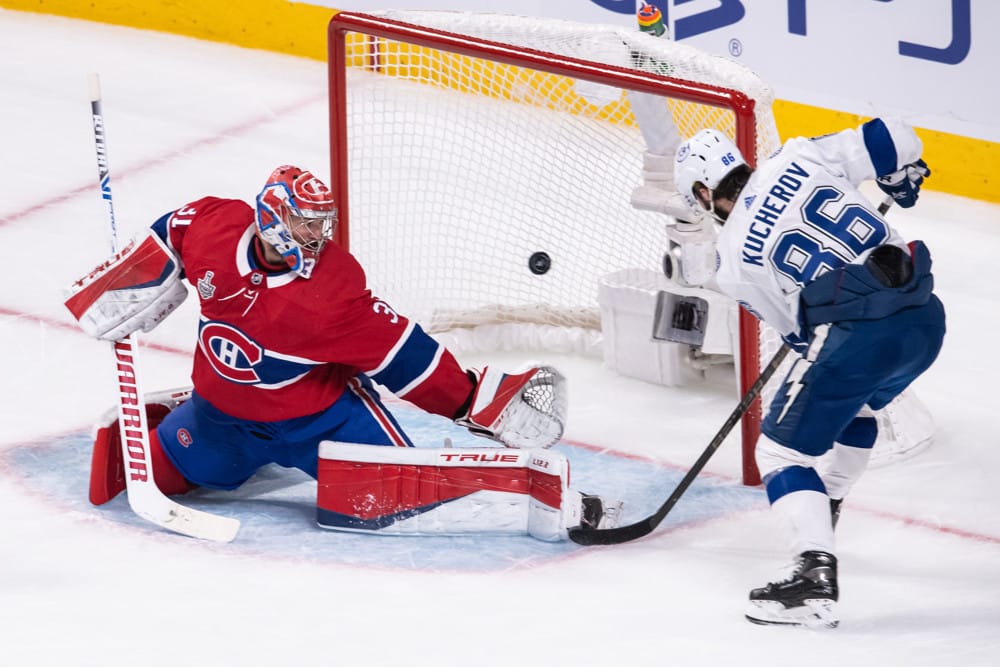 We have a Game 5 of the Stanley Cup Final. Josh Anderson scored in overtime to keep the Montreal Canadiens alive on Monday night. The Lightning now have a 3-1 lead as the series shifts back to Tampa Bay.

Will Andrei Vasilevskiy and the Lightning lock it down in Game 5 or will Carey Price and the Canadiens live to see another day yet again?

Here are the odds, picks, best bets, and more for Game 5 of the Stanley Cup Final tonight.

The Lightning have been favorites in every game of the Stanley Cup Final and that continues in Game 5. Back at home, they’re huge favorites yet again at TB Lightning -200 with the MTL Canadiens +185 as road underdogs.

Tampa Bay came into the Stanley Cup Final as the better team and they’ve looked it for a large majority of the series. They’ve outscored the Canadiens 16-8 through four games and only Game 4 was close.

It was all Tampa in Game 1 with a 27-19 shot advantage and 5-1 final score. Montreal pushed back in Game 2 to outshoot the Lightning 43-23 but Tampa Bay came away with the 3-1 win. A quick pair of goals in the first and second periods helped give Tampa Bay a 6-3 win in Game 3 to set up a chance for the sweep.

The Lightning never led in Game 4 as Josh Anderson scored the first and last goal of the game in the 3-2 overtime win. Tampa Bay outshot Montreal 34-21 but it didn’t matter. We have a Game 5.

I prefer the 60-minute line to the puck line, but 10 of the 15 wins being by 2+ goals (six of 15 by exactly two goals) is a bit telling. The Canadiens will also be desperate to pull the goalie early if they’re losing in the third period.

As I’ve said earlier in the series, if Tampa Bay is going to win it’s almost definitely going to be in regulation. All 15 of their wins in the playoffs were in regulation and 10 of them were by 2+ goals.

The Lightning are back at home and smell blood in the water. They should be able to take advantage and win the Stanley Cup in front of their hometown crowd.

The old reliable alternate spread/total parlay is back in play tonight. It hit with ease on Monday night in Game 4 and it hit in the last game in Tampa Bay (Game 3) as well.

Both of these teams are playing grind-it-out hockey in the Stanley Cup Final. On top of that, two of the best goalies in the sport are going head-to-head and they’ve impressed thus far. I expect that to continue tonight.

For those that may have missed my reasoning for this parlay, it just gives us a lot of options to cash. We cash on any Montreal win with less than seven total goals –– and if MTL wins it’s unlikely to be a high-scoring game anyway. We also cash on 1-0, 2-0, 2-1, 3-1, 3-2, and 4-2 Lightning wins. Only four of the Lightning’s 15 playoff wins have been by 3+ goals.

Tampa Bay’s last two clinching wins were 2-0 and 1-0 shutout wins. They won the Stanley Cup last year in Game 6 with a 2-0 win.

Tampa Bay’s team total over 2.5 goals is -225 anyway. It’s highly unlikely that the Lightning score three times against the Canadiens and lose.

The Lightning have allowed more than three goals just four times all postseason. Three of those games were against Florida in the first round and the fourth was against Carolina in the second round. Tampa Bay has not allowed 4+ goals in a game in their last 12 games (8-2-2, outscoring opponents 38-19).

Sure, this may be a solid bet if you want to bet on the Canadiens anyway. On the contrary, you will be able to get the Canadiens at better odds if the Lightning score first.