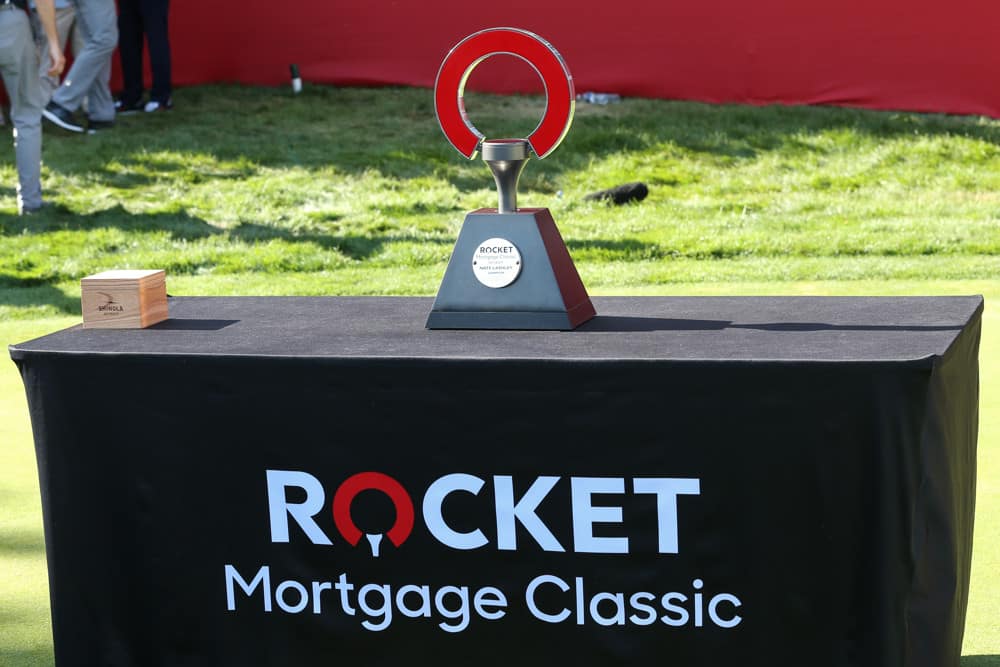 Highlighting the field is defending champion Bryson DeChambeau. Heading into the tournament last year, Bryson was still new to his bomb and gouge strategy of attacking a golf course. Some wondered how he could handle a tight, tree-lined golf course with this strategy. The result was perfection. He (and fellow bomber Matthew Wolff) carved up Detroit Golf Club. Both hit over all the doglegs and bunkers for short wedges into soft greens. They made this style of play look effortless. Before the tournament, Bryson actually apologized to the late and great Donald Ross for what he was about to do to the golf course. He’ll look to make Detroit Golf Club obsolete once again.

The Detroit Golf Club is a private club that was originally built in 1899 by William Farrand. The golf course was originally a 6 hole design, expanding to 9 holes a year later after the additional property was acquired.

In 1913, the legendary Donald Ross was brought in to survey the land and determine what else could be done to expand the golf course. He determined that with an additional land purchase there was enough room to design and build a full 36 hole layout. From there, the North Course and the South Course were born from his creation.

Many golf courses around the country claim to be a Donald Ross design, however, his signature style is often lost after either from years of neglect or significant alterations from modern architects. The Detroit Golf Club, however, is as close to a traditional classic Donald Ross design as they come:

When you think of the prototypical Ross design, the first thoughts should be narrow, tree-lined fairways flanked by lush rough and small, circular back-to-front sloping greens fortified by bunkers on either side. It’s a very popular template for most parkland golf courses in the United States. Detroit Golf Club is a textbook example of this classic Donald Ross design.

If anything, it’s almost too classic. There’s not a lot of variation in tee-to-green direction over the golf course, it’s a very flat piece of property and many holes are of the same cookie-cutter template. Most holes either run north to south or south to north with only very slight doglegs. From a viewer standpoint, the coverage might be a little bland because it will feel like the players are playing the same hole over, and over, and over.

For this tournament, the North Course is primarily used with a few slight alterations to the routing. The course recently underwent a renovation to lengthen the yardage on the scorecard in order to accommodate the best players in the world. The North Course had run under 7,000 yards, however, for the Rocket Mortgage Classic, the yardage will be just over 7,300. In addition, the opening hole will be played down the North Course 8th, with the 2nd played on the 9th and the 3rd hole played on the South Course 1st hole.

The back nine plays to the traditional North Course routing and the prime area for spectators will be around the 14th and 15th holes. From this area, spectators can watch players play almost all the holes from 14-18, and the tournament directors are looking to treat this area of the golf course as their very own “Amen Corner”.

As far as grass types, greens and fairways are a bentgrass/poa mix. The rough is bluegrass (aka poa annua) and about 4 inches in depth from the primary cut. The average green size is around 5,150 sq. feet, which is about the same size as they were for the Travelers. These overall are smaller than the average PGA Tour golf course. The greens will run around 12 on the stimpmeter. 12 is above average green speeds for the PGA Tour.

For a more in-depth look at the golf course, check out the video below from The Course Reports:

There are only two years worth of leaderboards and data to digest for the Rocket Mortgage Classic. That’s an extremely small sample size to draw sweeping and concrete conclusions about how this tournament plays. But through two years, bettors are starting to see a few trends.

The first trend is that despite the narrow fairways and tight corridors, players hit high amounts of fairways and greens during the tournament. Over the last two years, the average Driving Accuracy percentage on the PGA Tour is about 61%. Through two Rocket Mortgage Classics, the field hit about 65% of fairways. The above-average clip of fairways hit would be much higher if the fairways weren’t so narrow. But with almost all the holes dead straight away, there’s not a lot of concern about slightly errant balls running out of the fairway into rough. Players also often club down off the tee to lay up to an optimal approach distance. The length of the Par 4’s isn’t daunting, meaning players can comfortably club down to gain accuracy while still holding a shorter iron into the greens.

The second trend is despite smaller than average greens, the green in regulation percentage at the Rocket Mortgage Classic is also fairly high. Over the last two years, the average Greens in Regulation percentage on the PGA Tour was about 66%. At the Rocket Mortgage Classic, the field hit the green in regulation at about a 72.5% clip. With most of the field hitting into greens with shorter irons, most players are in attack mode. And during the summer months when thunderstorms pop up randomly, the greens can play quite soft in tournament play.

But while the video fly-over above stressed the importance of driving accuracy, Bryson DeChambeau and Matthew Wolff showed how outdated that strategy is as the Detroit Golf Club. Both players have elite length off the tee and the ability to hit over all the fairway bunkers. The tight tree-lined sightlines also gave them good aiming spots off the tee to tighten their focus. And because they possessed such high swing speeds, gouging out of 4-inch poa with a wedge to a soft receptive green isn’t a daunting task.

All in all, this makes this tournament pretty wide open. A bomber can gain a serious edge on the field so long as they’re not spraying it uncontrollably. But a shorter hitter can also play well by hitting lots of airways and leaning on their scoring clubs for good looks at birdies. This tournament also will feature a winning score eclipsing -20. Typically when the field hits greens at high rates with scoring clubs, this becomes a bit of a putting contest.

Here’s a list of tournaments that often feature high rates of greens and fairways hit in regulation:

Lastly, here are the players who have gained more than a stroke per round at both Rocket Mortgage Classics:

Unsurprisingly, there’s a good mix of players in this group. Bombers, short hitters, all-around good players. All types of styles are welcome at the Detroit Golf Club for those hitting the ball well.