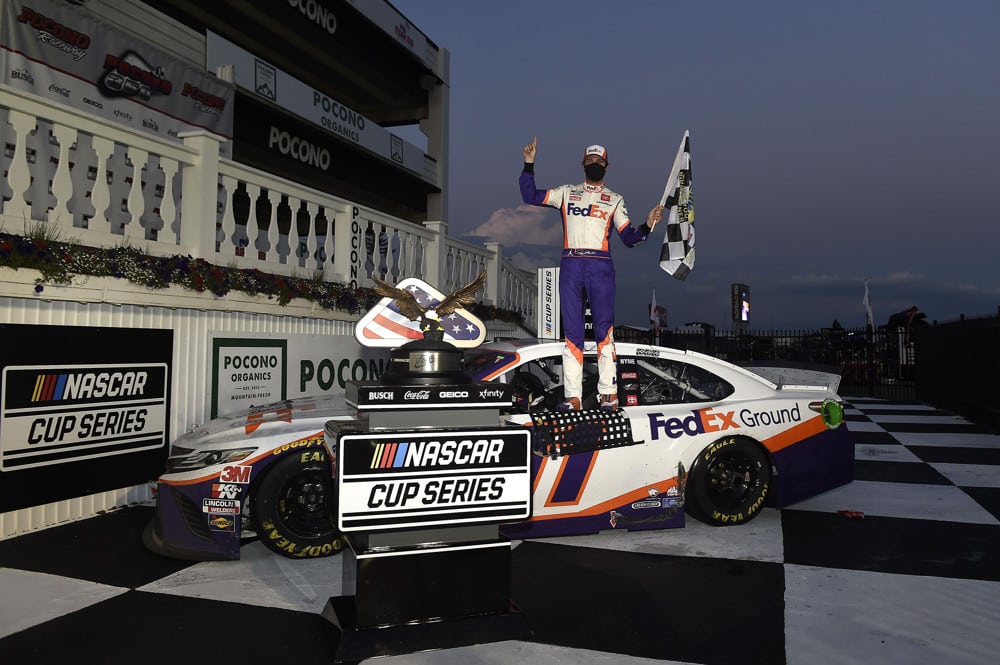 Buckle up for a NASCAR Pocono Weekend special event! On Saturday, drivers will hit the quirky Pocono Raceway for the running of the Organics 325. This will be 130 laps around the triangle track and will be the first points race of the weekend. Sunday, they’ll climb right back into their cars for the Explore The Pocono Mountains 350. They’ll also add 10 extra laps to their last outing, completing their second points race on the weekend. Both races have separate DraftKings contests, but the research for the track is the same. You can safely roll out these suggestions in one, or both slates.

Here are some suggestions based on these two designations. They are meant to mix and match and do not suggest a full lineup. These are merely drivers to consider when constructing your rosters. I always suggest you do some more research of your own on top of what I offer. Let’s make this a profitable season and above all, let’s have some fun during this NASCAR Pocono Weekend.

In his brief Cup career at Pocono, Chase Elliott has done well for himself. He’s taken the green flag ten times in Pennsylvania and has been a Top 10 driver in seven of them. Of those seven, three of them have produced a Top 5 finish. His best outing happened to be his first start in the major circuit. That day, he started from the 13th position, led 51 laps, then finished in fourth place. The last time he took the track here he once again crossed the finish line in fourth. In doing so, he shook off back-to-back finishes of 25th or worse.

Chase Elliott was disqualified on Sunday for having five loose lug nuts at Nashville. @chadknaus explains what happened. #RaceHub pic.twitter.com/cwZZKQcYyz

Loose lug nuts cost Elliott a 13th place finish in Nashville last week. His Napa Camaro was strong all day. A late-race vibration shook the lug nuts off of the face of the wheel and shook Elliott to a last-place finish. This could very much work in our favor this week as he will begin deep in the field on Saturday. With a powerful car and driver to match, that is a lot of cars to pass. He’ll do that and then some on Saturday setting you up for a nice start to your NASCAR Pocono Weekend.

Since the last Summer race of 2017, no driver has won more races in the Poconos than Kyle Busch. He has notched three victories in the last seven races. What’s more impressive is that he’s won from both the front of the pack as well as the rear. Two wins have come from the first and second starting positions. For the third, he worked his way to the front from 28th place. The younger Busch brother ranks third in terms of laps led around this track below Hamlin and the older Busch. Before his disappointing outing at the last Pocono race, he was riding a stretch of eight Top 10 finishes.

Busch was never fully happy with his car last week in Nashville. As such, he battled all day to salvage the 11th place finish from a second-place start. It was a rough outing for the man who took home the checkered flag at the Xfinity race the night before. Despite that, the #18 has run solid all season and is arguably one of the strongest non-Hendrick cars in the sport right now. Hopefully, he has fired up his crew enough to put him in a fast ride this weekend.

It seems, “The Tricky Triangle,” is not quite so tricky for Denny Hamlin. In his career, the pilot of the #11 car has taken the most checkered flags of any active driver. Six times Hamlin has crossed the finish line in first place including his first two attempts. On top of that, two out of the last three runnings in the Commonwealth of Pennsylvania. What’s more, he also sits atop the leaderboard with 785 career laps led at the Pocono Raceway. That is 201 laps more than the second-place driver on the list. He’s started 30 races on the track and only ten times has he failed to finish inside the Top 10.

He ties Jeff Gordon's all-time record with his sixth career win at the Tricky Triangle.pic.twitter.com/n9pkowiCe7

With no qualifying this week, Hamlin was awarded a Top 10 start. It’s a lucky draw considering his disappointing 22nd place finish last week. The #11 car is still searching for its first win of the season. Given his nine Top 5 finishes already this season, you have to think he’s due. Not to mention, time is running out to clinch a playoff berth. Winning on a track where he’s done it more than anyone else there goes a long way in ending the drought. Hamlin’s NASCAR Pocono Weekend should be a good one.

Since signing with Stewart-Haas Racing in 2018, Aric Almirola’s experience at the Pocono Raceway has vastly improved. Before moving to the #10 car, Almirola ran 11 races in the #43 car Richard Petty made famous. In that span, his best finish was 18th place. In fact, in his first 11 Cup starts, four of them found him finishing 35th or worse. Since his change of ride, four of his last six races have earned him a Top 10 finish. In the last running of the Organics 325, Almirola started from the pole and led 61 laps. He would go on to his fishing third securing his best career finish on this track in the process.

Led the field to green and brought home a top-5 finish. Felt good to run up front again. I'm proud of this #SmithfieldRacing team for working so hard and never giving up. pic.twitter.com/y6xUkHQGmK

Fans have been waiting for the 2021 breakthrough moment for Almirola. These last few weeks may have very well started the ball rolling. His Ford Mustang won a heat in the All-Star Open. That helped him log a solid eighth-place finish in the All-Star Race proper. Last week in Nashville, he ran the fastest qualifying lap giving him the pole. Unfortunately, he wasn’t able to translate that to a win. Despite that, he still managed to have the best outing of his season and finish in fourth place. He’s proven he’s fast enough to hang with the fast cars. Starting towards the front of the pack again this Saturday will give him enough of a chance to prove it again. A good enough finish will make Sunday’s race another good day.

Chase Briscoe has yet to take a green flag at the Pocono Raceway as a Cup driver. That said, his ultra-brief career on this track in the Xfinity Series has been fantastic. Two of his three career starts here have resulted in Top 3 finishes. His last time out netted him a checkered flag. Briscoe has made his way onto the broadcast several times in his Cup rookie season. Unfortunately, luck has not been on his side most of those times. For the #14 car to prove viable this weekend, you are hoping for his muscle memory to guide him through the field, and into at least a Top 15 finish in this NASCAR Pocono Weekend.

He bounced back! Retweet to congratulate @ChaseBriscoe5 on his fourth NASCAR Xfinity WIN of 2020. pic.twitter.com/LOz79Ac04V