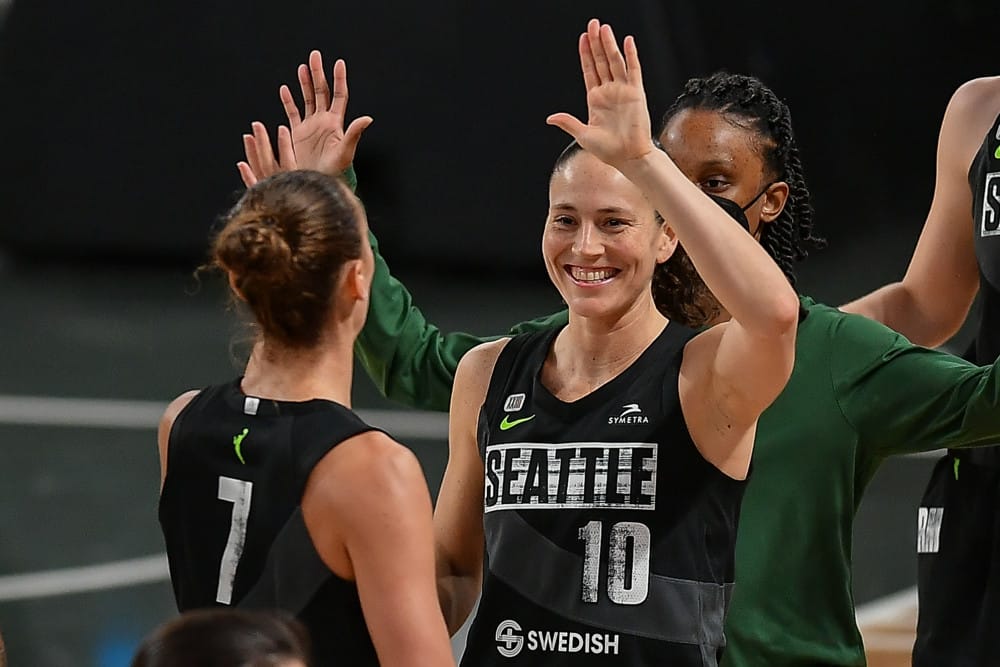 It’s an outsized night of games in the WNBA on Thursday. The first and last place teams meet in what could be another large blowout, while injuries and absences impact the rest of the packed slate. Here are the best bets for a busy night of WNBA betting action on June 17.

There was concern Seattle, the reigning champions, would take a hit after losing two defensive stars in the offseason. But the Storm (11-2) haven’t and the defense has looked sharper of late as the team jells a month into the season. They’re second in the league with a +11.2 net rating and a rematch with the Fever is salivating.

There’s concern about Indiana. Full stop. The Fever (1-12) have struggled to find any sort of groove and are last in the league in net rating at -18.2. They’re coming off an 87-70 loss to Seattle from Tuesday that could have been a lot worse.

Expect more of the same on June 17 with a potentially higher deficit for the Fever looming and one of the bigger WNBA betting lines. Much of the WNBA is muddled in the middle while Seattle pulls away and the Fever drop. The Storm opened at -15.5 and will cover it easily so take the Storm -15.5.

The Mystics (4-6) are running through center Tina Charles so far this season while still awaiting the return of former MVP Elena Delle Donne. Charles has the highest usage rating in the league and is averaging a WNBA-best 24.0 points per game. Until EDD returns, they might be tough to trust with your WNBA bets.

Thankfully for Dream (5-6) fans, she’s not playing Thursday night. Charles will miss the contest to attend the premiere of her film, “Game Changer,” at the Tribeca Film Festival in New York City. Charles is the director and producer. The Mystics are also likely without point guard Natasha Cloud.

The Dream blew out the Mystics last weekend, 101-78, and there’s no reason not to expect another Atlanta victory with Charles out and Cloud unlikely. The Mystics opened at -7, but take Atlanta +7 to cover.

It’s a tale of two teams trending in different directions this week. The Sun (8-3) have once again somewhat stunned fans with their success despite injuries to key players. That’s in large part because of MVP candidate Jonquel Jones. The 6-foot-6 center is averaging a career-best 21.6 points, league-best 10.4 rebounds, 3.0 assists and 1.5 steals per game. But Jones is away with the Bosnia national team at Eurobasket, a big reason to be wary of taking the Sun.

The Sky (5-7) have righted their ship with all five starters back together in the lineup. Funny how that works. Candace Parker has fit back into the fold seamlessly and the Sky looked every bit the power team we thought they’d be in a 105-89 win against the Minnesota Lynx on Tuesday.

This is the first of back-to-back meetings for the Sun and Sky. It won’t be a true test with Jones out, and given how the Sky are flying it would be tough to take Connecticut (no disrespeCT). The opening line is Sky -3, but it could even move as high as Sky -6, so take the Sky -3.

The Lynx have had it tough. They couldn’t get everyone together in training camp, waited two weeks for star forward Napheesa Collier to arrive from overseas commitments, and now are suffering a severe injury bug.

Comparatively, the Wings are young (average 24.7 years old) and deep, so they’re able to put in fresh legs and keep up the track meet. Arike Ogunbowale is having another All-Star season at 20.9 points per game, ranking fourth in the league, and is almost automatic with the ball in her hands on the final play of a one-possession game.

It’s the first meeting of the season for the two.  Four of Minnesota’s games have been decided by less than five points and two were by a bucket. The Wings have also played in four decided by less than five. It seems fair to say, then, that this one will be close and understandably the Lynx opened at -2. This is one of the tighter WNBA betting lines for June 17. Stay away from this one, but if you’re really interested, flip a coin.

The Liberty (6-5) were the hottest team in the league the first few weeks, but a more difficult schedule put an end to the winning streak. Betnijah Laney is solidly in MVP consideration with 20.5 points per game on average, and at least 20 in all but two games. One of those games was against the Las Vegas Aces (9-3), the second best team in defensive rating, two days ago.

The Aces are cruising into the second quarter of the season as a well-oiled offensive machine and title favorite. Reigning MVP A’ja Wilson has been a defensive wall, and the height of the Aces is a problem for the Liberty. They will again be without center Natasha Howard, a former defensive player of the year who is rehabbing a knee injury, and former No. 1 overall pick Sabrina Ionescu, who has ankle tendonitis.

The Liberty might be able to keep it tighter than the 100-78 blowout the other night, but missing the defensive big and ace distributor should keep bettors from taking New York. Aces opened at -14 on the line and you should take the Aces -14.

The Storm are betting favorites to win the title at +225 by Draftkings. While they did lost key players from two championship squads, they still have Breanna Stewart, who is in the midst of another domestic and overseas run of accolades, and ageless wonder Sue Bird. The defense has tightened up and they  have the experience needed to win it all.

But the best best right now might be the Aces at +275 by Draftkings. A’ja Wilson is even better than her MVP season, though it’s in ways that don’t show up in a stat line. Liz Cambage is having her way with defenders, and smiling while doing it, and Kelsey Plum is coming off a career night this week. They’re rocking in every facet of the game and split the home-and-home contests with Seattle to open the season, a strong turn from being swept last Finals while missing key players due to injury.

The Aces are solid favorites and it would be worth it to take them now before the lines reflect it and wreck some prime WNBA bets.