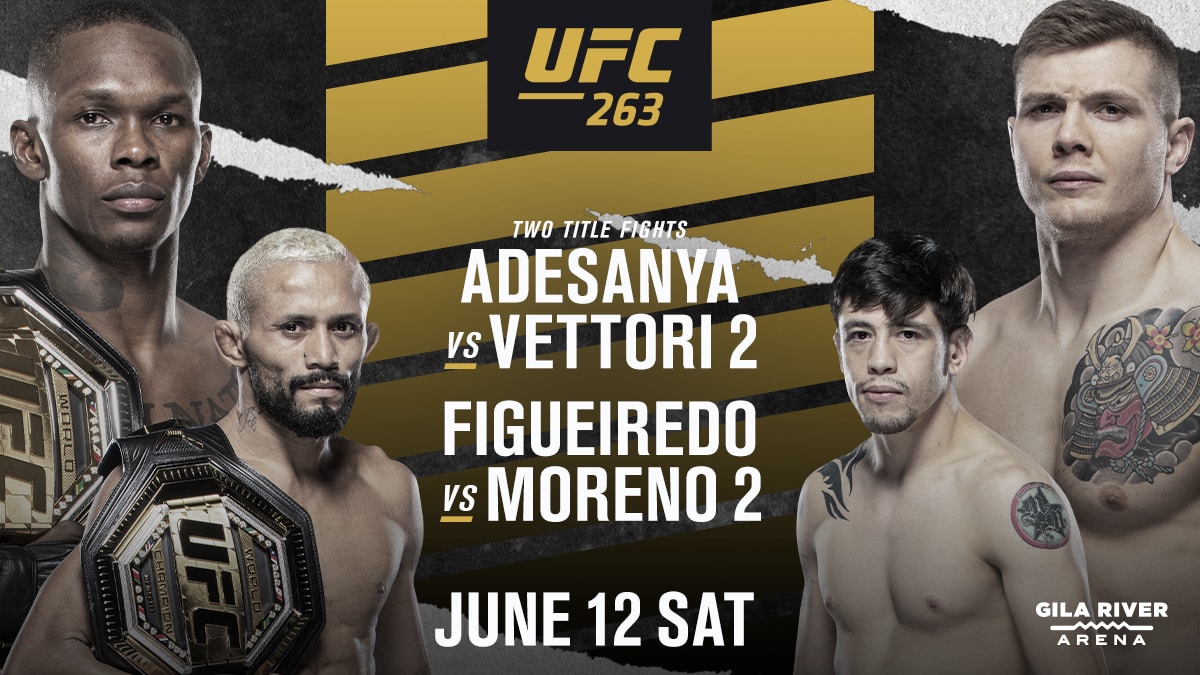 The UFC octagon hits the road once more this weekend, touching down in the Gila River Arena in Glendale, Arizona for UFC 263. This is one of the strongest fight cards the promotion has put on in years, headlined by two title fights. But, more importantly, I’m going to go a perfect 14 for 14 with my UFC 263 predictions, promise, cross my heart.

A rematch three years in making, as Marvin Vettori famously gave Israel Adesanya his toughest fight (up to that point) in a split decision win for Adesanya in this very same arena in 2018. ‘The Last Stylebender’ went on to become middleweight champion, while Vettori has won four straight since that loss. Adesanya is also coming off of his first career loss in his last fight, a failed quest to add the UFC Light Heavyweight Championship to his mantle. Despite these backstories, I expect the champ to win the rematch and retain his title – he’s just the better fighter of the two, plus he’s more physically gifted.

Another rematch in our co-main event, but this one only six months in the making. Deiveson Figueiredo and Brandon Moreno fought to a draw in an instant classic for the UFC Flyweight Championship last December, a fight in which the champ was deducted a point for a low blow. I expect another war here, with the champ retaining and perhaps even finishing off the tough Moreno this time.

The UFC’s prodigal son, Nate Diaz, returns after another of his long layoffs, in a strange matchup, as Leon Edwards isn’t exactly a marquee name. Plus, this is a bad style matchup for Diaz, as Edwards will probably be able to pick him apart in this first-ever non-main event (or title fight) scheduled for five rounds. Edwards via decision is the pick, but it also wouldn’t be surprising to see him win via doctor’s stoppage, as Diaz is a bleeder.

Let’s finally get some plus money and ride with the 43-year-old Demian Maia. The greatest Brazilian jiu-jitsu practitioner in MMA history, he’s got a nice matchup here in Belal Muhammad. Muhammad is not a finisher, which should allow Maia the time needed to score at least one takedown, which is all he needs to finish a fight.

I don’t like the line, and I worry about Jamahal Hill’s ability to stuff Paul Craig’s takedown attempts, but I still pretty much always take the bigger, younger, better striker in a fight, which in this case is Hill. If you want to make things more interesting, take him via knockout.

I ended up with more underdogs than I originally thought, including Adesanya’s teammate Brad Riddell. ‘Quake’ is on a six-fight win streak, including three in the UFC, and has the better striking and grappling stats, so he’s a worthy live dog.

Yet another rematch, this one from just a couple of months ago. In their first meeting, Eryk Anders was swarming Darren Stewart, on the verge of stopping him, before inexplicably throwing an illegal knee that ended that fight in a DQ. Assuming he keeps his head, ‘Ya Boi’ should have no trouble finishing Stewart legally this time.

I told you this turned out to be a dog heavy card for me. This top contender women’s flyweight fight is a tough one to pick, however, but I’m going with the surging Lauren Murphy. She’s on a four-fight win streak, has never been finished in a fight, and has the all-around game to match JoJo Calderwood.

You know I have to fade my fellow Canadians any chance I get, so Movsar Evloev is the pick here. It also helps that he’s a perfect 14-0 as a pro and an elite grappler.

Alexis Davis is Canadian, so you know what to do. Pannie Kianzad is also on a nice three-fight win streak, is seven years younger, and is the superior striker in this matchup.

‘T.Wrecks’ Terrance McKinney just fought last Saturday in LFA, so this will be a very short notice UFC debut for him. This usually spells trouble, but I think McKinney’s explosive striking, as well as size and youth advantage, will get him a W here.

Steven Peterson has the grappling ability to keep this one a striking battle, in which I feel he is much better than the youngster Chase Hooper, who is still basically a grappling specialist.

I’ve gone a few fights picking chalk, so let’s go plus money again in Luigi Vendramini. The Italian Stallion’s grappling should carry the day here for him against Fares Ziam.

A big boy fight starts things off on Saturday, and I’m going with former middleweight Jake Collier, who has put on 80 pounds over the past few years. Despite this, his cardio looked decent in his last fight, and he should be the better striker and grappler in this matchup.