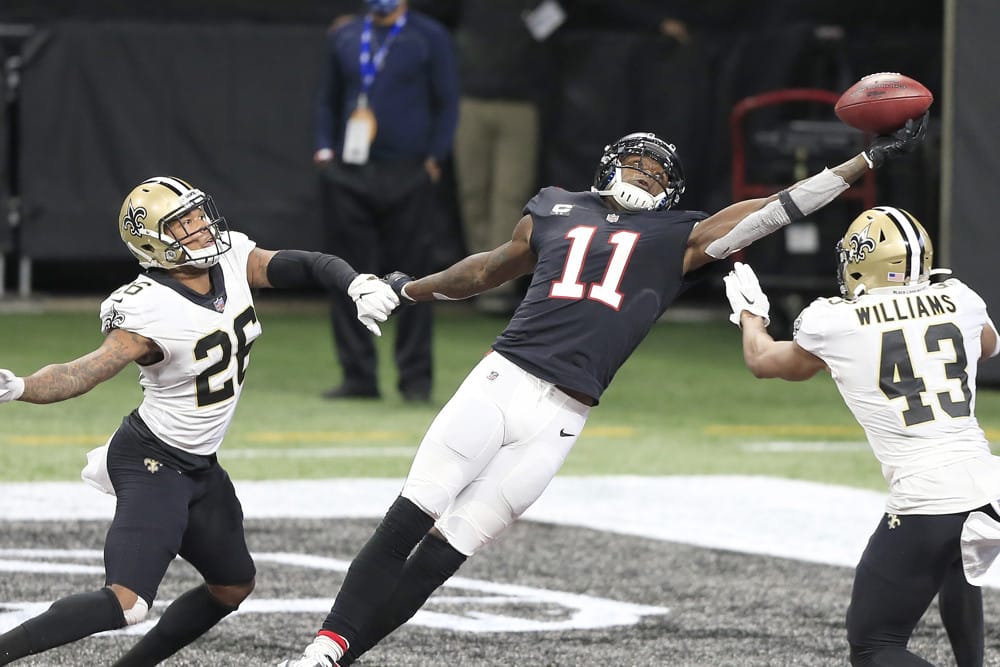 So far it has been one of the most entertaining NFL off-seasons thus far. First, we heard about the turmoil surrounding the Houston Texans and Deshaun Watson. Watson was not happy about being involved in the General Manager and head coaching hiring process. Next, we saw the frustration Aaron Rodgers had with the Green Packers dating back to last season, and now coming out and wanting to play for another team. That means it is time to fire up trade odds for Julio Jones.

Yesterday, on “Undisputed” with Shannon Sharpe and Skip Bayless, Julio Jones says “I’m outta there.” Sharpe and Jones had a phone conversation live on the show where Jones made the statement of leaving the Falcons.

Julio Jones’ thoughts on the Falcons and Cowboys. pic.twitter.com/Y9tQDnw2dO

Now the speculation beings on which team will trade for the Falcons star receiver. Below, are a few teams with betting odds on who I believe makes the most sense for Julio Jones. 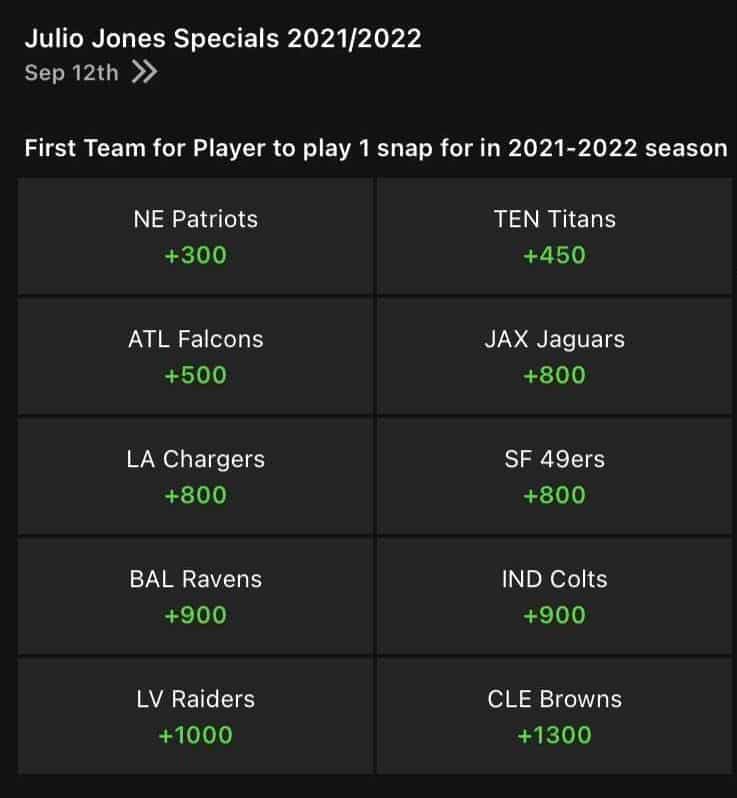 So far during this offseason, the Patriots significantly upgraded the offensive weapons. Patriots signed two tight ends, Hunter Henry and Jonnu Smith. The Patriots are in desperate need of help at the wide receiver position. N’Keal Harry has not panned out the way they hoped. In fact, last season the Patriots did not have a receiver who exceeded 60 receptions. Also, they did not have a receiver who caught more than three touchdowns all season. Now is that because of the offensive system Josh McDaniels ran? Was it the lack of weapons for Cam Newton? Or was it a lack of accuracy or arm strength for Newton?

Whatever the case may be, the Patriots need a #1 receiver in this offense. Julio Jones would instantly give that to the New England Patriots. All of a sudden the Patriots would feature Jones, Smith, and Henry at the skill positions and still have Jakobi Meyers and N’Keal Harry to fill the two and three receiver spots.

It almost seems like the Titans are rumored with every star player that becomes available in the league. However, the Titans lost Jonnu Smith to the Patriots and Corey Davis to the New York Jets. The Titans have star wide receiver A.J Brown and signed Josh Reynolds in the off-season to fill the void left by Corey Davis. But getting Julio Jones on this offense would give the ability for the Titans to pick up right where they left off. Julio Jones and A.J Brown lining up for the Titans at the receiver position would give fits to opposing defenses.

Kyle Shanahan can never have enough weapons in his offensive system. In fact, Shanahan was the offensive coordinator for the Atlanta Falcons during the 2016-2017 season. Therefore, both Shanahan and Jones are familiar with each other. During the 2016-2017 NFL season, Julio Jones in 14 games had 83 catches, 1409 yards, and 6 touchdowns. As a matter of fact, that season was one of three seasons in his entire career where Jones averaged 100 yards receiving per game.

Furthermore, the 49ers, like many other teams can use a true #1 receiver like Jones. Currently, the wide receiver depth chart for the 49ers will be Deebo Samuel, Brandon Aiyuk, and Richie James. Insert Julio Jones in this wide receiving core and the 49ers will have one of the most prolific receivers in the league. Let’s not forgot that the 49ers also have George Kittle in this offense as the cherry on top! Making a trade for Julio Jones would be a boost for the San Fran offense.

The Cardinals made headlines this offseason when they signed A.J Green and J.J Watt to the team. But the bigger news that was floating on social media was the comments made by De’Andre Hopkins in regards to Julio Jones. In fact, Hopkins came out and he said he would be willing to restructure his contract to bring Jones to the team. Furthermore, Deandre Hopkins started the “recruiting” process for Jones in an Instagram post on his account yesterday that featured a picture of himself. Jones, and Green: 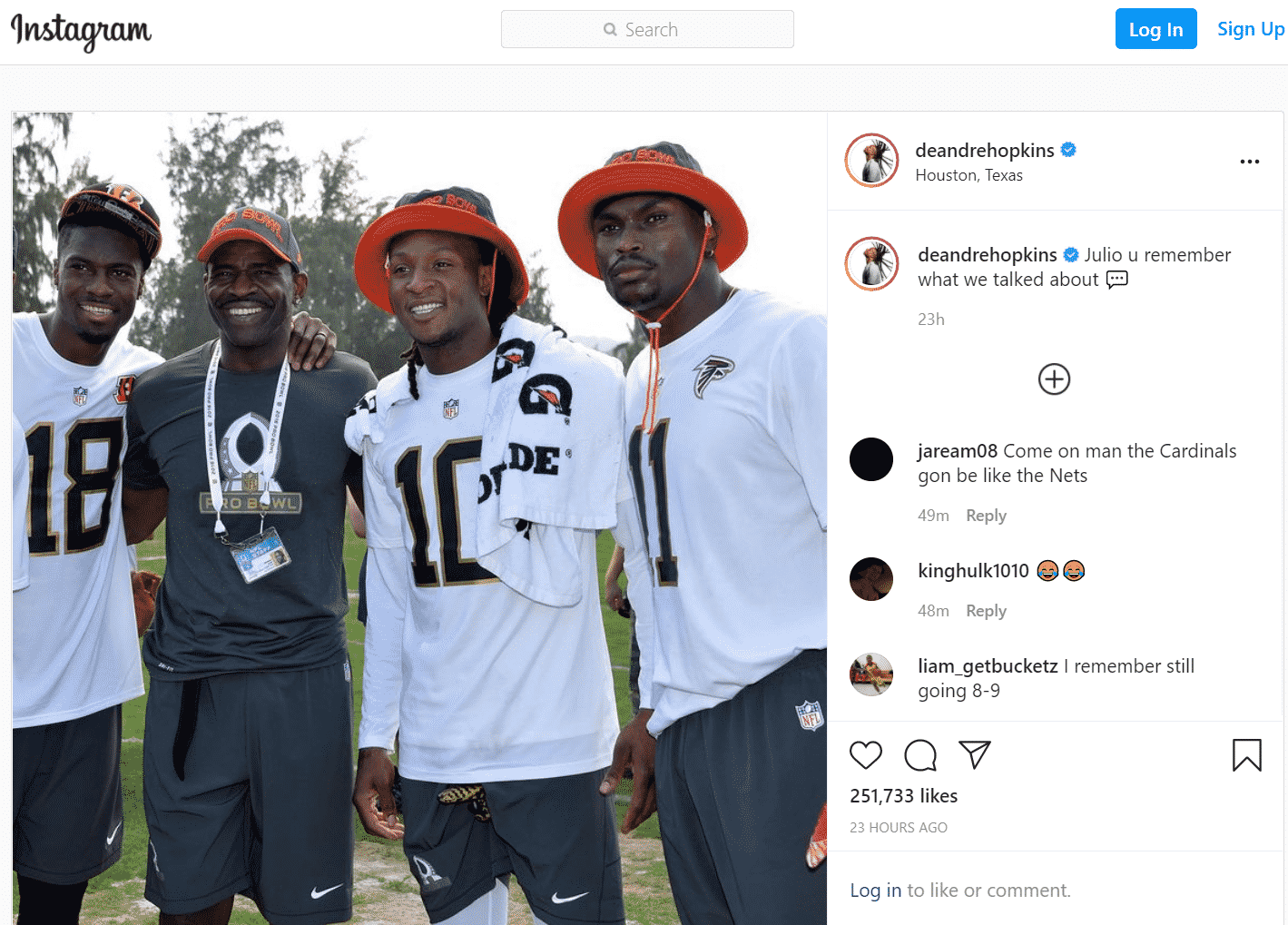 Star players love to play alongside each other every chance they get. Perhaps will this sway the decision for Julio Jones to join his fellow star receivers in Arizona via trade?

Where do you think Julio Jones will end up next season?