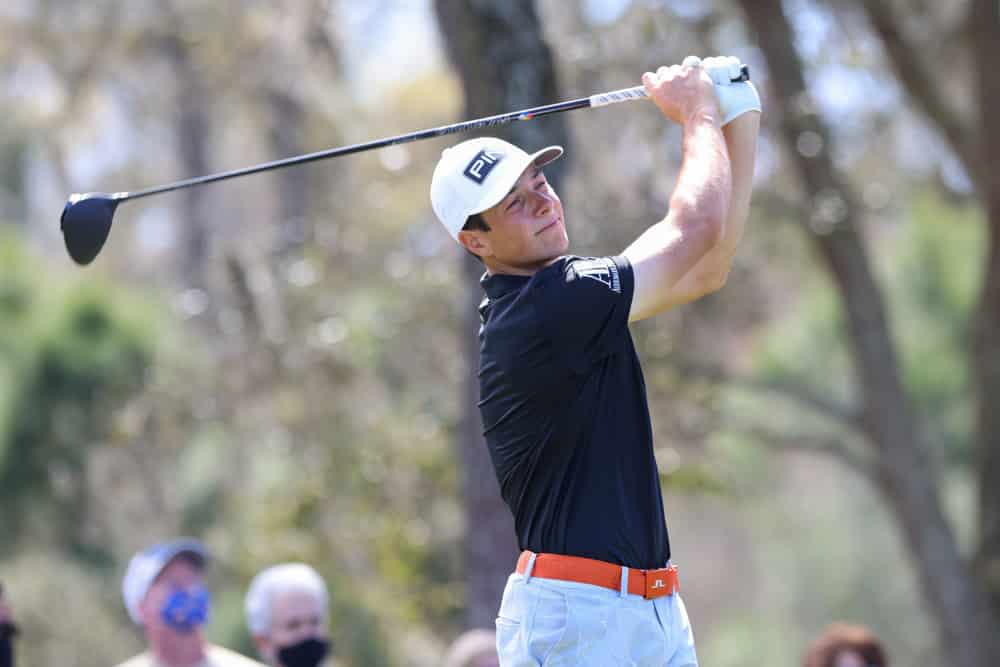 Quail Hollow perennially ranks out as one of the five toughest courses on tour.  The course plays long, and as a par 71 over 7500 yards, it is. Unlike last week’s 5 par 3’s, this a traditional par 71 with only 3 par 5’s.  A handful of the par 4’s would be par 5’s in my book, with over 500 yards of champion ultra dwarf Bermuda grass to cover.  Surprisingly, the course plays more as a ball strikers course than a bomber’s paradise where par 4 scoring is more important than driving distance. Other key stats are strokes gained tee to green (SG:T2G), strokes gained ball striking (SG:BS), strokes gained putting (SG:P), proximity 150-175, and scrambling. Past Wells Fargo winners include Homa (19′), Day (18′), Harman (17′), and Hahn (16′).

Viktor is coming off a 65 for his final round at the Valspar this past weekend. That was the low round of the day bumping him to a T-3 finish. I’m not sure what his weekend routine is, whether is shots of Fireball or not, but he comes out and performs on the weekends. Prior to Valspar he was 21st at The Masters and had a run of 4/5 top-5 finishes to end 2020 and begin 2021. Over his last 10 events, he is gaining 4.7 strokes T2G and 0.7 strokes putting. He’s the 3rd ranked player in the field Par 4 450-500 yards and 5th in ball striking. To me, this is the perfect recipe for a Viktor victory on his first trip to Wells Fargo.

Big Tony Finau is one of our star plays of the week. Tony is playing some pretty good golf lately and had himself a nice 10th place finish at The Masters. Quail Hollow is a long course and historically you need to score well on par 4s if you want to win. It is well known Tony is a long hitter and ranks out 11th in par 4 scoring. Not only does he check all the boxes, but Tony also has never missed the cut at this event. Between the course history and statistics, Tony makes sense this week.

You throw out the Masters, where Sungjae lost over 10 strokes to the field and missed the cut, he has posted ten straight top-30 finishes. His best rounds have come of late; 17th at the Players, 8th at the Honda, and 13th at RBC. He is also a par 4 specialist, ranking 8th on par 4’s 450-500. He finds fairways off the tee, strikes the ball as well as anyone, and putts best on Bermuda grass. Im’s first appearance of the Wells Fargo Championship was in 2019 when he finished in 31st.  For him to be priced below $9,000 we view him as a sure-fire steal this weekend.

HV3 is coming off one of his best weekends as a professional. He took 2nd at the RBC Heritage, where he gained 12.1 strokes on the field. Varner does not have the course history to justify this pick. However, we are hoping to see a repeat of last week’s performance. HV3 gained over 6 strokes T2G and 5.2 on approach. Now we know those numbers will be hard to repeat, but if he sinks a few putts and continues striking the ball the way he is watch out.

Matt Jones is one quiet the heater lately. He won the Honda Classic and finished in 26th place at The Masters. Jones makes sense this week, coming in gaining 3.6 strokes T2G and 2.4 on approach. The dude is dialed in.  He also is an excellent par 4 scorer and Bermuda putter. At $7,400 Matt Jones is a value play.

NeSmith is a high-quality ball striker and approach shot player who is perfectly suited for Quail Hollow. He ranks 6th in the field for proximity 150-175, 5th in strokes gained approach, and 3rd in good drives gained. Although he does not pop in the Par 4 category his entire T2G game does. Where he has gained 4 strokes over his last 10 events. In those events, he had missed cuts at The Players and the Arnold Palmer while posting top-20’s at Waste Management, AT&T, and Genesis. He is making his inaugural appearance at Wells Fargo, but he has shown success on his first attempt in the past. NeSmith is a value play in the middle of the pack and should no garner much ownership between Munoz and Schwartzel. Add him as a nice value play in your Wells Fargo Championship DraftKings lineup.