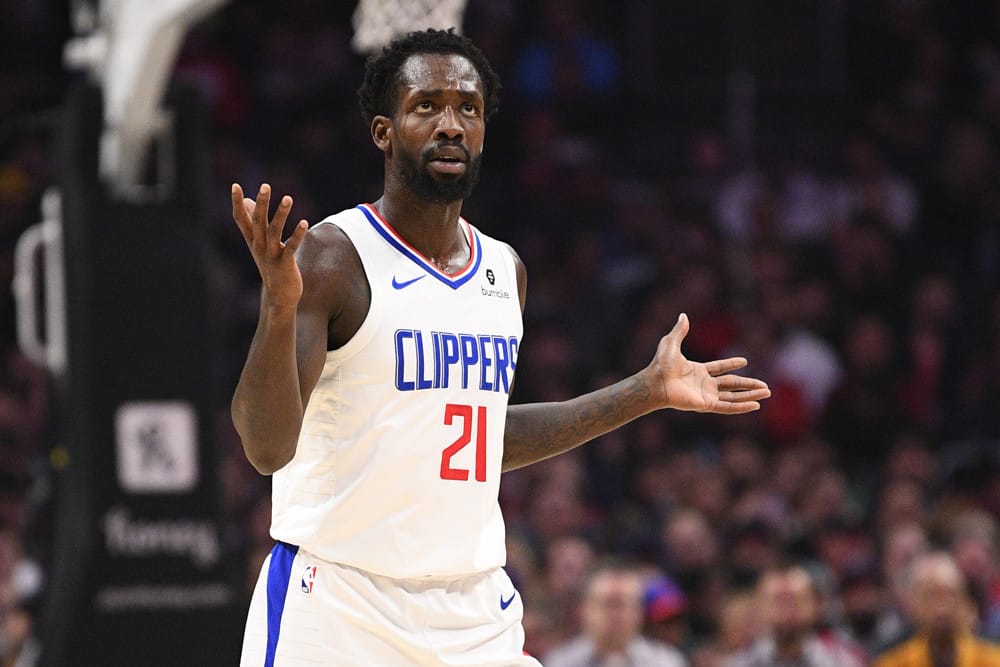 Happy Thursday everybody! There’s a nice-looking seven-game slate today, and I’m excited about this NBA DFS lineup. Someone is going to end the day 100K richer, hopefully you and I! So without further ado, let’s dive in.

I’m starting my lineup off with somewhat of a flyer. Patrick Beverley is a cheap option, but I can see a world where he is the value play of the day. His Clippers take on Phoenix, and I figure Beverley will be called on more often than normal as the Clippers look to slow down CP3.

He’s only averaging 19.8 FPPG this season, and PatBev has been about as Jekyll and Hyde as it gets this year. It’s encouraging that Beverley has topped 20 fantasy points in three of his last four though. Furthermore, I’ll take a chance on a defensive stud here in a game where his number could be called a lot.

We are looking to the other side of the Clippers/Phoenix contest for this one. Devin Booker is leading the charge for a stud-filled Suns squad as he averages 39.6 FPPG and 25.9 PPG. Normally the Clippers are a tough DFS matchup. However, Phoenix is one team I’ll back against them.

Booker has shown us time and time again that he can produce no matter who he is facing. He carries a nice average of 18.9 PPG against the Clippers in his career, and I expect him to top this number Thursday. He’s chalky, but I am all over Devin Booker on this slate today.

Think you know who will win it all? Go here for NBA Championship odds.

It is time for another flyer here with Josh Richardson. This is another example of a player who has been super inconsistent all season long. However, I do see a few things out there that give me a little bit of confidence that Richardson may be due for a decent game on Thursday.

He’s fresh off a game where he shot 0-9 from the floor. Richardson is the type of player who likes to bounce back after horrid performances such as that. He’s averaging 23.7 FPPG this year. If we can get around this from him in this outing, then I’m happy with it given his cheap price.

This is one player that you want in all your lineups on Thursday. The Raptors are short-handed with Kyle Lowry and Fred VanVleet both out. OG Anunoby has shown plenty of times this season that he is capable of carrying the offensive output of the team regardless of who is in the lineup.

Although he averages only 29.9 FPPG so far this season, Anunoby has scored more than 30 fantasy points in eight of his last ten games. After playing only 10 minutes last game, he found himself ejected. I am sure he’s ready to get out on the court and produce, so I am all over Anunoby today.

At the center position, I am taking a walking double-double in Rudy Gobert. He is having one of the best seasons of his career, averaging 14.6 PPG with 13.3 boards per game and 2.9 blocks per game on his way to 40.2 FPPG. Gobert has topped the 40 fantasy points mark in seven of his last ten. He’s making a name for himself as a consistent source of fantasy points.

Gobert’s NBA-leading Jazz are set to take on Portland on Thursday. I believe that this is a great matchup for them as a team, as well as for Gobert individually. The Trail Blazers don’t really have anyone that I feel can hold the paint as well as Gobert. I look for him to have a hell of a game, and I believe the winning lineup will feature Gobert in some shape or fashion.

I am stacking Utah here with Jordan Clarkson at the guard position. He’s having a very good season, and he looks to be a lock for the Sixth Man of the Year Award. Clarkson averages 17.2 PPG and 28 FPPG, and the shot attempts have been there. In fact, you have to go back to New Year’s Day to find the last time Clarkson attempted less than 10 shots.

This is a somewhat risky play because of how dependent Clarkson’s NBA DFS output is on making his shots. However, this could be a game where he gets his shots from deep falling. Portland ranks 23rd in road three-point defense. Clarkson could easily top the 30 fantasy points mark if he gets four or more threes to fall, and I like the chances of that happening here.

I mentioned earlier that Toronto will be short-handed at the guard position with Lowry and VanVleet both out. It is only logical to play Gary Trent Jr. on Thursday with both of those guys out. Trent Jr. will be in the starting lineup, and there’s a very good chance that he will lead the Raptors in scoring, or at the very least shot attempts.

Trent Jr. has topped the 40 fantasy points mark twice since joining his new squad. Both of those games came against weaker teams much like the Bulls team they are facing. With an abundance of workload left to carry, there’s a chance Trent Jr. carries that load. I’ll take a shot at playing him for this cheap price of $6,300 given the opportunities that should be there.

Bobby Portis feels like a must-play for everybody on Thursday. Giannis Antetokounmpo is listed as doubtful for Milwaukee’s game against Dallas. Portis was already a force from the bench, and he’s excelled when he’s been thrown into the starting lineup. He is fresh off his sixth double-double of the season, and this matchup with the Mavs could be his seventh.

Portis only averages 24 FPPG this season, but when he’s on he is really on. Portis has topped the 25 fantasy points mark in four of his last five though, and this gives us encouragement. With Giannis most likely out of the lineup, the sky is the limit for Portis on Thursday. For only $5,300, don’t miss out on this cheaper source of NBA DFS points because you may just regret it. 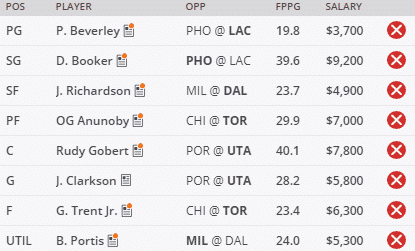