Houston’s Road To The Final Four, Chances Of Winning It All, Predictions 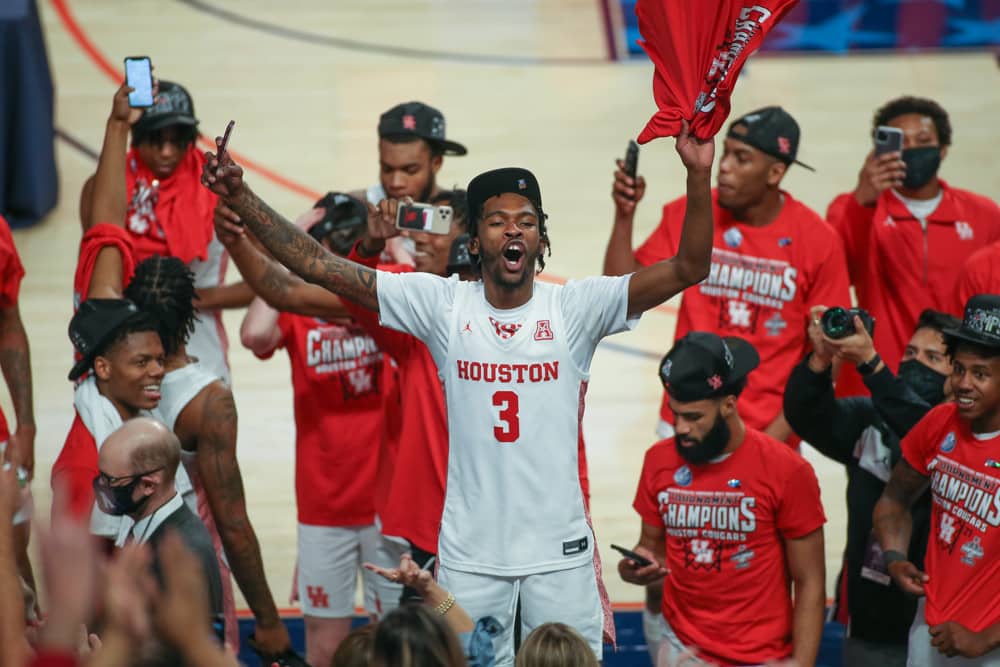 The Midwest Region sent three teams seeded No. 8 or lower to the Sweet 16. But in the end, it was the No. 2 seed in the region, Kelvin Sampson’s Houston Cougars, that earned their spot in the Final Four.

Led by a disciplined, physical defense and pure domination on the glass, Houston was able to generate just enough offense to gain wins over Cleveland State, Rutgers, Syracuse, and Oregon State on its way to the Final Four.

Let’s take a closer look at just how Houston was able to earn a spot in its first Final Four since 1984.

Houston dominated the AAC in 2020-21, going 14-3 (technically finishing second to Wichita State, though the Shockers played four less games) and winning the conference tournament. The Cougars also went unbeaten in the non-conference, knocking off teams like Texas Tech and Boise State.

Kansas transfer Quentin Grimes was named AAC Co-Player of the Year while DeJon Jarreau earned Defensive Player of the Year honors. Houston entered the NCAA Tournament at 24-3 and earned a No. 2 seed in the West Region, their highest since the Phi Slama Jama years of the early 80s.

Houston dominated the No. 15 seed Cleveland State in the opening round. But things did not come so easily in their Round of 32 matchup against No. 10 seed Rutgers.

Houston simply was never able to find a rhythm offensively, shooting just 37 percent from the game. The Cougars trailed 50-40 with 10 minutes to play and looked like they might be taking an early exit from the Tournament.

Instead, Houston buckled down and got back in the game. The Cougars gave themselves a chance to win in the final minute when Tramon Mark came through with the biggest play of their season.

Go-ahead putback and-1 for Houston by Tramon Mark. #MarchMadness pic.twitter.com/1k7AdGs5Lm

It’s only fitting that the play that saved Houston’s season came on an offensive rebound. The Cougars ranked No. 6 in rebounding margin this season and grabbed 16 offensive boards against Rutgers. But none were bigger than Mark’s putback that sent Houston to the Sweet 16.

Heading into a matchup with hot-shooting Syracuse in the Sweet 16, some wondered (me) if Kelvin Sampson’s group would be able to score enough to keep pace with Buddy Boeheim and the Orange.

Houston scored only 62 points against the Syracuse zone, but they dominated defensively. Houston never gave Boeheim or any of the Syracuse guards room to breathe. Syracuse shot just 5-23 from beyond the arc for the game and Boeheim went just 3-13 overall.

Grimes led the offensive attack with 14 points while Justin Gorham pitched in with a double-double.

In the Elite 8, Houston was matched up with No. 12 seed Oregon State, who had similarly won ugly numerous times on its way to upset victories over Tennessee, Oklahoma State, and Loyola-Chicago.

But despite beating other dynamic defenses previously in the tournament, Oregon State couldn’t generate anything offensively against Houston. Once again, the Cougars relied on their calling card of physical play, winning the rebounding battle and hitting timely shots to win.

Houston dominated Oregon State for the first half before the Beavers were able to claw back into the game. Oregon State even managed to tie the score at 55 late in the second. But Sampson’s group responded as they have all tournament when faced with pressure situations, and clawed their way to a 67-61 win.

Marcus Sasser led the way for Houston with 20 points as they booked their first trip to the Final Four since the likes of Clyde Drexler and Hakeem Olajuwon suited up for the Cougars.

Despite being a No. 2 seed, Houston has been underestimated all tournament long. That will only continue as they get set to face Baylor in a National Semifinal matchup Saturday.

Baylor is currently a five-point favorite over Houston according to PointsBet.  Meanwhile, much of the national conversation is around a potential Baylor-Gonzaga National Championship Game, something Kelvin Sampson will undoubtedly be mentioning numerous times as he gets his team prepared to play.

But Houston has proved its style of play is a recipe for success in the Big Dance. While flashy offenses are nice, Houston has shown to be a championship contender you must be able to thrive defensively. Especially during the grind that is the NCAA Tournament.

Houston’s ability to defend as well as rebound at an elite level has propelled what is a relatively mediocre offensive team to the Final Four.  Against Baylor, and the question will be can Houston’s defense continue to make up for its lackluster offense? Houston has not faced a team as talented as Baylor yet this season. Scott Drew’s team is physical, athletic and has shotmakers all over the floor.

Offensively, Grimes will have to look for his shot early and often. Also, Sasser and Jarreau will need to help him by being aggressive and try to get the Bears into foul trouble.

Houston’s path to victory is getting Baylor to play their style. If Baylor can get out and run and play loose offensively, the Cougars aren’t going to be able to match that pace. Sampson will look to slow the game down, get to the foul line, and earn second-chance opportunities on the glass.

If Houston manages to pull off an upset, the juggernaut that is undefeated Gonzaga may stand in their way of a national title. If Gonzaga beats UCLA, Houston would be significant underdogs in the National Championship Game. It’s tough to imagine a way for them to beat the Bulldogs who are so disciplined, unselfish, and deep.

But at this point, it would be foolish to write Houston off against anyone. Baylor, and then possibly Gonzaga, would seem to simply be too talented for Houston on paper. But in the NCAA Tournament, anything is possible. When the lights are bright and the pressure is high, big-time offenses often can go cold. But defensive fundamentals and effort tend to be much more reliable.

Houston is ready and willing to win ugly, and Baylor must be ready to do the same if they’re going to end the Cougars’ magical run.

Baylor’s Road To The Final Four, Chances Of Winning It All, Predictions