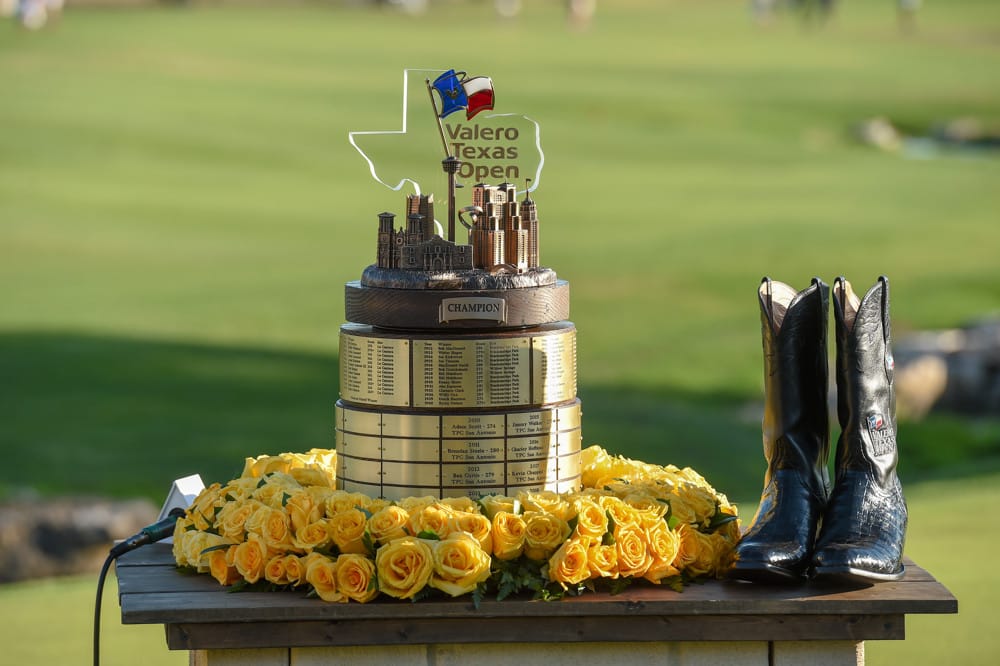 With its placement one week before The Masters, most of the best players are opting for rest. But there are a few big names in this field who will use this tournament as a warm-up to Augusta National. One such name is Dustin Johnson. He’s a surprising entrant in this field and has only played this tournament once. But it appears that he’s employing the same strategy he used last fall. In November, Dustin Johnson played the Houston Open one week before the Masters. He finished runner-up to Carlos Ortiz in that tournament, and then the very next week won the Green Jacket. He’ll look to fine-tune his game at TPC San Antonio in hopes of getting in the best possible form to defend his championship.

Another notable in the field is Jordan Spieth. Spieth is a familiar name to this tournament, as he’s an AT&T ambassador (AT&T is a major sponsor for this tournament and the golf course) and a Texas son. He also is playing very well over the last few months and is back in the conversation amongst the favorites at August National. Like Dustin Johnson, he’ll look to sharpen his game before vying for his second Green Jacket.

Lastly, much has been made that Rickie Fowler is currently not in the field for the Masters. Fowler has struggled for about 14 months now, battling swing changes and a slumping putter. Fowler will have to win this week in order to qualify for the Masters next week. Given his recent form, a win seems very improbable. But he certainly has the motivation to give it his all.

TPC San Antonio boasts two 18 hole golf courses. One course, the Canyons Course, was designed by Pete Dye and is actually a very intriguing layout. There are a lot of elevation changes up, down, and around the canyons to create an interesting 18 hole track. There are also wide fairways that make it relatively playable for amateurs However, because of the terrain and the short length on the scorecard, it isn’t very conducive to set up the infrastructure needed to broadcast a tournament.

Instead, the tournament is held on the Oaks Course, which is on the south side of the property. It was built in 2010 by Greg Norman, which Sergio Garcia consulting on the project. Soon thereafter it became the host for the Valero Texas Open. The golf course, at its maximum, stretches to just over 7,400 yards long. It’s naturally a Bermudagrass golf course, but in its March date the fairways and rough are overseeded with ryegrass. The greens are overseeded with bentgrass and poa trivialis. It won’t be exactly the conditions the players will see at Augusta National next week, but it’s close.

As for the golf course itself, it has its positives and negatives.

Let’s start out with some positives. First, the golf course by all accounts is immaculately maintained. As part of the TPC network, the golf course boasts fantastic turf conditions for its players. In addition, the golf course is not saturated with real estate eyesores like many TPC golf courses are. Golf course architect Greg Norman wanted the natural landscape to shine, and it has a much more rugged look than other TPC golf courses. And its located at a beautiful J.W. Marriot resort. It’s only accessible to guests of the resort, but it features top-notch amenities, including a phenomenal pool, lazy river, and water park. While the kids can go hang out by the pool, you (and your spouse) can get away and play a well-maintained and challenging golf course.

There are some interesting holes and features to it. The greens have some nice undulations and the greenside bunkers have good edging. The back nine also boasts some good holes. The 11th features a centerline bunker with a fairway runout of about 300 yards. That forces some decisions off the tee. The 16th is Greg Norman’s take on the 6th at Riviera. The Par 3 has a bunker placed in the middle of the green, which makes for an inconvenient visual for the tee shot. The 18th also features a split fairway and is similar to the 18th at Jumeriah Estates in Dubai. That’s another Greg Norman design and is the home of the DP World Championship on the European Tour.

There are also a lot of flaws about the golf course too, and it all has to do with design and routing. For starters, the front nine is pretty forgettable. There’s a lack of imagination on the front nine, especially on the Par 4’s. Most are slightly dog-legged with bunkers guarding left and right of the green. The first nine holes of the golf course won’t stick in the minds of anyone who plays it.

But the biggest negative about the golf course is how difficult it is for amateurs to play it. Greg Norman was one of the longest and straightest drivers at his peak, and it requires one to hit it long and straight to fare well on the Oaks Course. Those who don’t are in for a very long day. Each fairway is flanked by a rocky terrain of bramble and brush. There’s no room to miss off the tee. The fairway bunkers are also really deep and make it very difficult for an amateur to get out of.

But finding the fairway doesn’t mean a player’s task is done. All the greens are heavily guarded by deep and difficult bunkers. There are a few holes that do provide some bailouts to miss, but even those aren’t easy to access. Almost all the greens are raised above the fairway too, which doesn’t allow for someone to run the ball up to the green. Everything is aerial at TPC San Antonio, which doesn’t make it very friendly for amateurs.

The golf course is also borderline unplayable with a stiff north wind. That’s the prevailing wind in San Antonio during the spring. Starting at the clubhouse, the golf course works its way to the south downhill before winding its way in the opposite direction. With a north wind, amateurs are aided with a tailwind and downhill conditions over the first half of the front and back nines to get the ball towards the green. But once they turn for home, they’re playing both uphill AND into the wind. And with no way to run the ball up to the green, it’s very difficult to get on in two (or three).

As for a tournament golf course, it’s a good test for the professionals, even if they don’t like the venue. An anonymous poll on Golf.com asked the players what their least favorite golf course on the PGA Tour schedule was. TPC San Antonio was one of the more frequent responses. That might be a reason why Sergio Garcia, who heavily influenced the design of the Oaks Course, doesn’t feel inclined to ever play it.

But for those who do show up and tolerate it, it’s not overly difficult to get around it. The professionals don’t suffer from the same woes that us mere mortals do. They can certainly make a mess of things if they’re not driving the ball well or don’t have the short game to get up and down from tough spots off the green. But if the wind doesn’t blow, the best players in the world can eat the golf course up.

What makes this tournament difficult to handicap is its placement on the schedule. It’s one week before the Masters, so motivation is a question for most of the top players on the field. It also is on the heels of the WGC Match Play, and golfers like Scottie Scheffler and Matt Kuchar played well over 100 holes across five days. Fatigue might be a factor too. These are two unknown factors bettors have zero insight of.

What about things golfers can pinpoint as areas for success at TPC San Antonio. For starters, here is the relative skill set chart of past leaderboards to preview who fares well at the Valero Texas Open at TPC San Antonio: 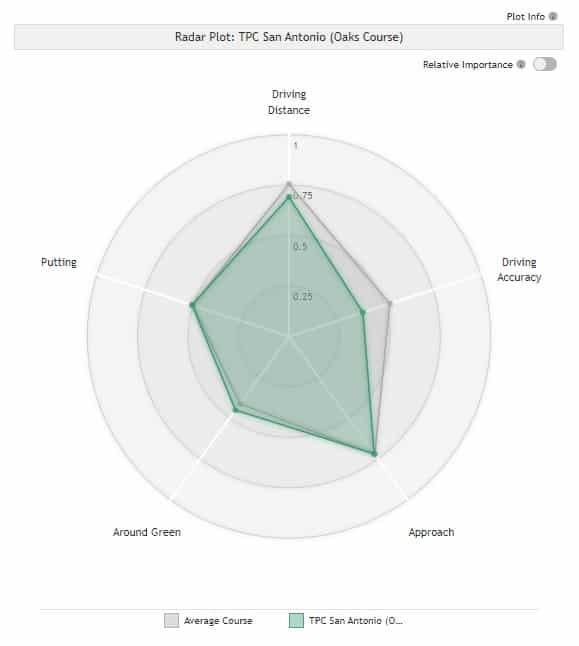 There’s not a lot of correlation between both bombers or shorter and accurate players at the top of the leaderboard. While there is definitely trouble for those who spray it all over the place off the tee, both styles of golf can work at TPC San Antonio. Shorter hitters have a better chance of keeping the ball in play and out of trouble. Longer hitters do have enough room to operate and hit over certain bunkers. In addition, their added length helps them cut through windy conditions for shorter approach shots. As long as players don’t miss huge at TPC San Antonio, both long and short hitters can farewell at the golf course.

Good scramblers also have a slight advantage at TPC San Antonio, particularly good bunker players. As mentioned earlier, the greenside bunkers are deep and difficult to get up and down from. The forecast this week also calls for more easterly winds, meaning players will contend with crosswinds for their approach shots. That should make hitting greens in regulation a difficult task and force players to scramble to get up and down for par.

Good putters can have an advantage at the golf course because of the undulations of the greens, but it’s not a necessity. Only five of the last 10 winners of the Valero Texas Open finished inside the Top 10 in Strokes Gained-Putting the year they won. 2014 winner, Steven Bowditch, managed to lose strokes putting yet still win the tournament thanks to a fantastic ball-striking week. And the defending champion of the tournament, Corey Conners, notoriously squanders great ball-striking weeks with horrific putting performances.

Lastly, here is a list of players in the field this week who have gained more than a stroke per round on the Oaks Course at TPC San Antonio (minimum of 10 rounds played):

For the most part, these are golfers who don’t have tremendous length off the tee but do a nice job keeping the ball in play. But most, if not all, are really good with their irons and fantastic scramblers. A lot of these players are also really good with their wedges. Most of the Par 4’s on the property feature approach distances between 100-150 yards. These players have great command over their short irons, thus have had great success at this golf course.