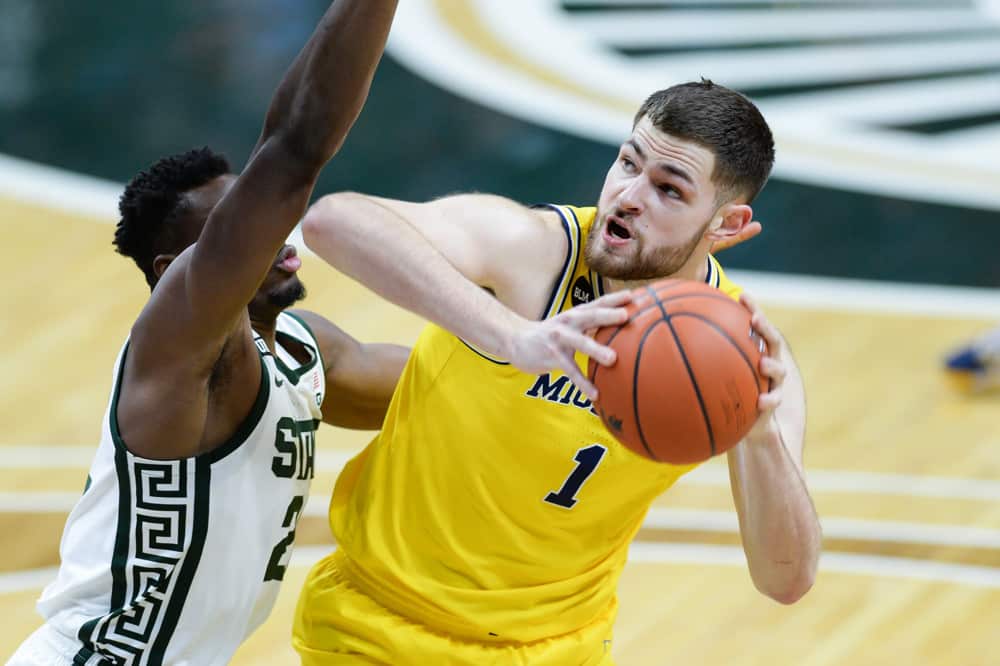 With all due respect to the Big 12, it is hard to argue against the Big Ten being the best conference in college basketball this season. The Big Ten has as many as 10 teams realistically in the running for an at-large bid. They could have five teams earn a top-four seed in the NCAA Tournament.

With so many teams having Final Four aspirations, the Big Ten Tournament is sure to be one of the most competitive in league history. The Big Ten Conference Tournament will begin Wednesday at Lucas Oil Stadium in Indianapolis.

Let’s take a look at which teams you should be keeping an eye on in Indy this week, and of course, if you’re looking for more action you can check out odds for all March Madness games.

Purdue infamously lost the likes of Matt Haarms and Nojel Eastern to the transfer portal entering this season and was not expected to be serious contenders in league play, being picked 9th in the preseason poll.

However, Matt Painter and his team have regrouped to quietly have an excellent season. They enter the Big Ten Conference Tournament as the No. 4 seed after earning a 13-6 league record.

Led by outstanding forward Trevion Williams, Purdue has earned six Quad 1 wins this season, and is the 13th ranked team in the country by KenPom.

In the Big Ten Tournament, the Boilermakers managed to earn a double-bye into the quarterfinals. They are set up to likely play Ohio State in the four-five matchup.

At +650, Purdue is certainly a team capable of making people a lot of money. While much of the attention will be on Michigan, Illinois, and Iowa, Purdue should not be forgotten about.

Ohio State has had a tremendous season and should be in line for a top-four seed in the NCAA Tournament. However, there are two big reasons why they can’t be trusted in a stacked Big Ten Tournament field.

The first is that the Buckeyes are entering the tournament ice-cold, having lost their last four games and falling to the No. 5 seed in the Big Ten Tournament. While none of their four losses are troubling individually (vs. Michigan, at Michigan State, vs. Iowa, vs. Illinois), they paint the picture of a team that’s fading entering March instead of surging, which is a big red flag.

The second reason Ohio State should be faded at +600 is that they struggle to defend against elite teams. Chris Holtmann’s team has dynamic scorers in E.J. Lidell and Duane Washington Jr., but entering Wednesday, they ranked only No. 80 in the country in adjusted defensive efficiency according to KenPom, well below other title contenders such as Michigan (No. 4), Illinois (No. 6), Wisconsin (No. 13) and Purdue (No. 18).

While Ohio State might be able to outscore teams once or twice, it’s tough to buy them as title contenders unless their defense significantly improves.

Michigan has been one of the most impressive teams in the country this season. They went from unranked to as high as No. 2 overall and won the Big Ten regular-season championship.

Michigan does enter the Big Ten Tournament having lost two of their last three games, but they are an elite defensive team and have half-a-dozen players that can light up the stat sheet each night, making them almost impossible to game plan for.

However, one possible deterrent for the Wolverines in the Big Ten Tournament is the health of senior point guard Eli Brooks. Brooks left Michigan’s loss against Michigan State on Sunday with an ankle injury, and so far it’s unclear when he’ll suit up again. Brooks is one of the team’s best defenders and keeps the ball moving offensively. If he’s unable to play in the Big Ten Tournament, it could open the door for the rest of the field.

Michigan may be the slight favorites to win the Big Ten Tournament according to oddsmakers, but it’s tough to say any team is entering Indianapolis with more momentum than Illinois.

Brad Underwood’s group blew out Michigan in Ann Arbor last Tuesday without their leading scorer Ayo Dosunmu. They followed that up with a win at Ohio State to finish the regular season at 16-4 in league play.

Iowa’s Luka Garza is a shoo-in for Big Ten Player of the Year, but Dosunmu and Kofi Cockburn are arguably the best one-two punch in the league. Illinois is also an excellent defensive team, has a tremendous senior point guard in Trent Frazier, and just largely looks like a team that could very easily win the National Championship.

On the Illini’s side of the bracket, a date with Garza and the Hawkeyes could be a possible semifinal showdown. In the team’s only meeting this season, Dosunmu and Frazier combined for 49 points to lead Illinois to an 80-75 win.

One of the themes of the college basketball season has been the struggles of many of the blue blood programs. Kentucky and Duke likely will miss the NCAA Tournament altogether, while teams like North Carolina and Michigan State have been on the bubble for much of the season.

But Tom Izzo’s club may be peaking at the right time, and it’s tough to bet against him in March. Izzo has led Michigan State to six Big Ten Tournament championships, the most of any school since the tourney was introduced in 1998. The Spartans are also the defending champions, having won the 2019 Big Ten Tournament after the 2020 version was canceled due to the COVID-19 pandemic.

This year’s Michigan State team has been up-and-down and currently sits at 15-11 overall. However, they likely have all but locked themselves into an NCAA Tournament bid after knocking off rival Michigan in their final regular-season game. Michigan State now has five Quad 1 wins and has also beaten the likes of Illinois and Ohio State.

Still, Michigan State doesn’t want to take any chances of being left out of the Big Dance on Selection Sunday. They will undoubtedly be eyeing a deep run in the Big Ten Tournament. Michigan State opens up against Maryland on Thursday in the eight-nine matchup. A win there would set up a rubber game against top-seeded Michigan in the quarterfinals.

At +5000, Michigan State isn’t getting much love from oddsmakers. They’ve shown they’re capable of beating anyone in the league and shouldn’t be counted out.