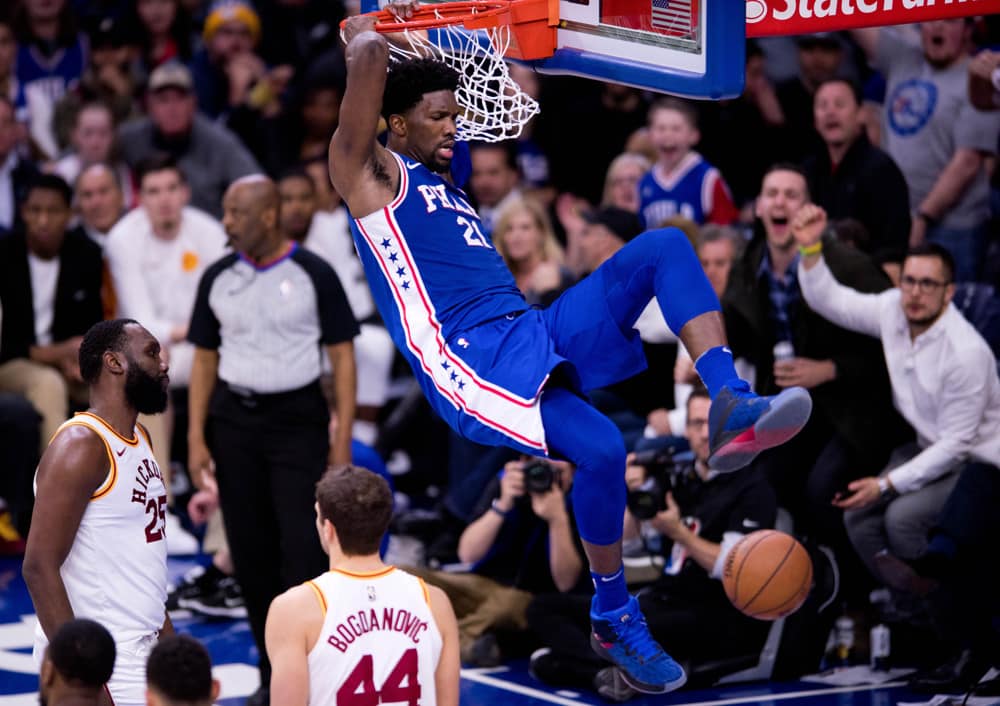 Now that the NFL season is in the rear-view mirror, it is time to catch up on what is going on in the NBA season. We all need betting action on the NBA now so this post will provide a quick catch up on the season. There has been plenty of surprises and upsets this season. In this post I will discuss the updated betting odds for the best conference teams, early season MVP, darkhorse MVP candidate, Rookie of the Year, and the odds-on favorites to win the title!

The Utah Jazz currently are the #1 seed in the Western Conference. In addition, the Jazz rank amongst the top five in the following categories: offensive efficiency, effective field goal %, three-point shooting %, and three point makes per game. Donovan Mitchell is playing at an elite level for this team. Mitchell is averaging 24 points, 4.3 rebounds, and 5.1 assists per game.

However, the biggest surprise for the Jazz is the play of Jordan Clarkson. Clarkson is averaging 17.4 points per game off the bench and shooting 37.8% from beyond the arc. Lastly, Clarkson is the overwhelming favorite to win Sixth Man of the Year with odds of -303.

The biggest surprise to people is the play of Joel Embiid. Embiid has played in 20 of the 25 games. As a result, Embiid is averaging 29 points, 11 rebounds, and 1.3 blocks per game. There is chatter in the NBA that Embiid is one of the front runners for MVP this season. Furthermore, the Sixers are getting the production they envisioned in Tobias Harris. Harris is the second leading scorer on the team, averaging 20.3 points and 7.5 rebounds per game.

If the Sixers continue the success they are having there is no doubt they can finish the season as a top two seed in the Eastern Conference, led by Embiid and Doc Rivers.

To no one’s surprise Lebron James is once again at the top of MVP conversations this season. As a matter of fact, Lebron’s  betting odds have drastically reduced from 10/1 down to 2/1. This season, Lebron is leading the Lakers to a record of 20-6, second in the Western Conference, trailing the Utah Jazz by only half a game. In addition, Lebron has played in all 26 games for the Lakers and is averaging 25.5 points, 7.9 rebounds, and 7.9 assists per game. Lastly, Lebron is shooting a career best 39.4% from beyond the arc.

If you have not watched The Joker play yet, you are missing out on watching an outstanding skilled big man who can do it all. Jokic is one the most exciting players to watch in the NBA in large part to the great offensive ability he possesses with scoring and passing. In fact, Jokic is #4 in league in assists per game, averaging 8.6. Additionally, The Joker is averaging 26.9 points and 11.3 rebounds this season. Lastly, the Denver Nuggets got off to a slow start this season but have managed to get themselves above .500, with a record of 13-11.

How does Joel Embiid’s growth compare to Hakeem Olajuwon and Tim Duncan? @jkylemann dives deep into how Embiid has transformed into an MVP candidate: https://t.co/bVzH1xOoe1 pic.twitter.com/pyvwYP1ykH

As I mentioned above, Embiid is leading the Sixers to the #1 seed in the Eastern Conference so far. Embiid looks healthy and has played in the majority of the games for the Sixers. In fact, Embiid has the highest player efficiency rating amongst the NBA players so far. Defenses are having a hard time containing Embiid and his value is on full display this season. Lastly, if Embiid continues to play at this level he will certainly be amongst the finalist for the award and the betting odds indicate that.

Damian Lillard is quietly leading the Blazers to the fifth seed in the Western Conference. The Blazers are down two starters, with injuries to Jusuf Nurkic and CJ McCollum. Lillard this season is averaging 29.4 points, 4.5 rebounds, and 7.1 assists. If the Blazers can sneak into a top four seed in a competitive Western Conference, Lillard has a chance of getting the MVP award.

Rookie of the Year

LaMelo Ball was selected third by the Charlotte Hornets in the NBA Draft this season. I believe LaMelo Ball has wrapped up the award for the season, and the betting odds prove that. Ball opened at +390 but is down to a -150 favorite to the win the award. Yes, this early in the season Ball is playing at a high level for the Hornets. In fact, Ball leads in points, rebounds, and assists amongst qualifying rookies. Plus, Ball is playing at a higher level as a starter with the injury to Devonte Graham. If Ball can stay healthy for the rest of the season, he can and will go on to win Rookie of the Year.

The biggest surprise this season was the Nets acquiring James Harden. Not surprisingly, the betting odds for the Nets shifted significantly after the Harden trade.  The conversations started within the NBA circle whether this trio is the best big three of all time. I believe that was a bit of stretch. The Nets biggest issue they need to fix is on the defensive side of the basketball – since the Harden trade the Nets dropped to #26 in defensive efficiency. In addition, due to lack of rim protection, the Nets are #29 allowing points inside the paint.

However, when you have a trio of Durant, Harden, and Irving, any team will be front runners to win the championship. But if they are not able to acquire a rim protector and improve on defense this team will not have a shot of winning the title.

The biggest take away this season for the Clippers is the play of Paul George. George took plenty of slander for his play in the NBA bubble. In fact, George acknowledged the bad play in the NBA bubble and took it personally. As a result, this season George is one of the players playing at a high level. Paul George is averaging 24.4 points, 6.2 rebounds, 5.5 assists and shooting a career best 47.8% from beyond the arc.

If George can sustain this for the reminder of the season and carry it into the playoffs the Clippers should at minimum be playing in the Western Conference Finals. In addition, Kawhi Leonard is doing what he has been doing all of his career – playing at a superstar level. The biggest question for the Clippers will be what they are going to get from their role players. If Clippers are going to compete for the title, they will need guys like Serge Ibaka, Luke Kennard, and Marcus Morris to knock down shots for them. I do expect the Clippers to be active at the trade deadline to acquire a point guard.

The defending champions seem to be sleep walking thru the season so far. Despite having the second-best record in the Western Conference, the Lakers are letting teams hang around all game and turning on the switch in the fourth quarter. However, when you have two of the top five players in the league on your roster you always have a chance of winning. I fully expect to see the Battle of L.A in the Western Conference finals this season. I also expect the Lakers to be active during the trade deadline, whether that is to add another star player or a scoring wing player.

I call this a dark horse for a reason, and the betting odds indicate that but the Suns are an intriguing team. In fact, the Suns are a top 10 offensive and defensive efficient team. Furthermore, Suns have a backcourt that can compete with any back court in the league with CP3 and Devin Booker. If this team can stay healthy and knock down their three-point shots they can give teams fits. Currently the Suns have a 15-9 record, which is fourth in the Western Conference.