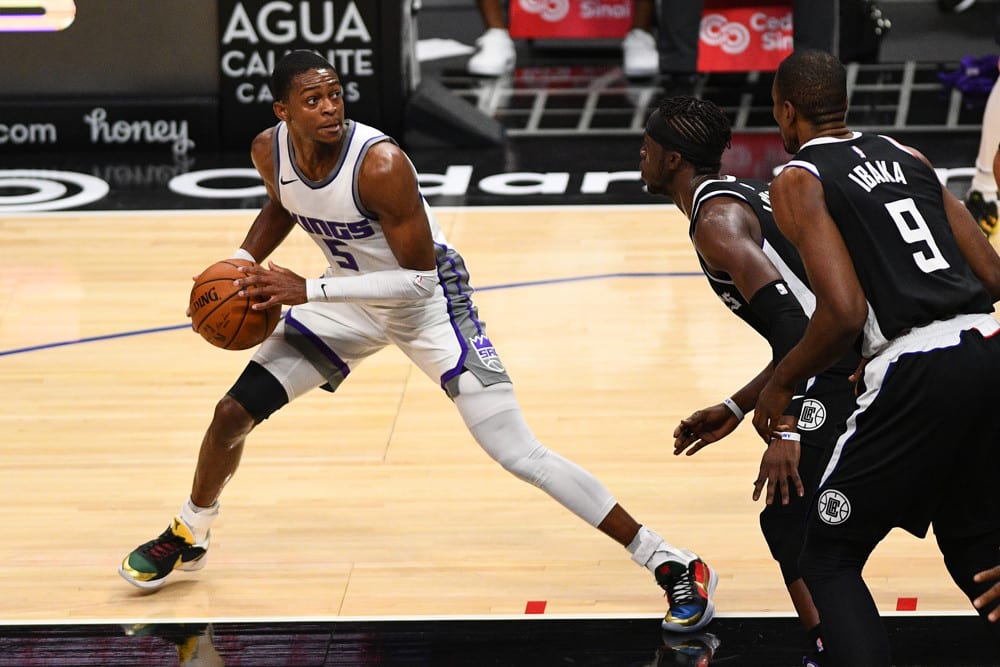 De’Aaron Fox is playing like an All-Star and is a big reason we like Kings in NBA Picks for Tuesday.

Zach ‘Swiss Bank’ Broner and Ryan ‘Rich Fat Baby’ McKee welcome NFL fans back. Now that the Super Bowl is over, everyone can focus on what’s really important. And that is NBA picks for Tuesday! First, the NBA Gambling Podcast recaps the biggest NBA weekend news stories. Steph Curry went 11-of-19 from 3-point range and 57 points on Saturday night. Unfortunately, that was not enough to stop the Dallas Mavericks led by Luka Doncic and his 42 points and 11 assists. That begs the question on how bad the Warriors are as a team if they still can’t win on the back of Curry’s monster stats.

Moving on the the other big news item, the NBA had their first big trade in awhile. The Detroit Pistons traded former-MVP Derrick Rose to the New York Knicks for Dennis Smith Jr. and a second round 2021 draft pick via Charlotte. Since Zach is a lifetime Knicks fan, Ryan picks his brain about what he thinks of the trade and what it might mean for New York’s record moving forward. ‘Swiss Bank’ has a lot of thoughts about this trade, and almost none of them are happy.

Finally, at the 20:42 mark, the guys jump into their previews for all the games on Tuesday, February 9, 2021. Also, ‘Rich Fat Baby’ and ‘Swiss Bank’ give out their NBA picks for Tuesday. They open with Brooklyn Nets vs Detroit Pistons and New York Knicks vs Miami Heat. After that, they move to Houston Rockets vs New Orleans Pelicans and Golden State Warriors vs San Antonio Spurs. And then they end with Orlando Magic vs Portland Trail Blazers, Philadelphia 76ers vs Sacramento Kings, and Boston Celtics vs Utah Jazz.