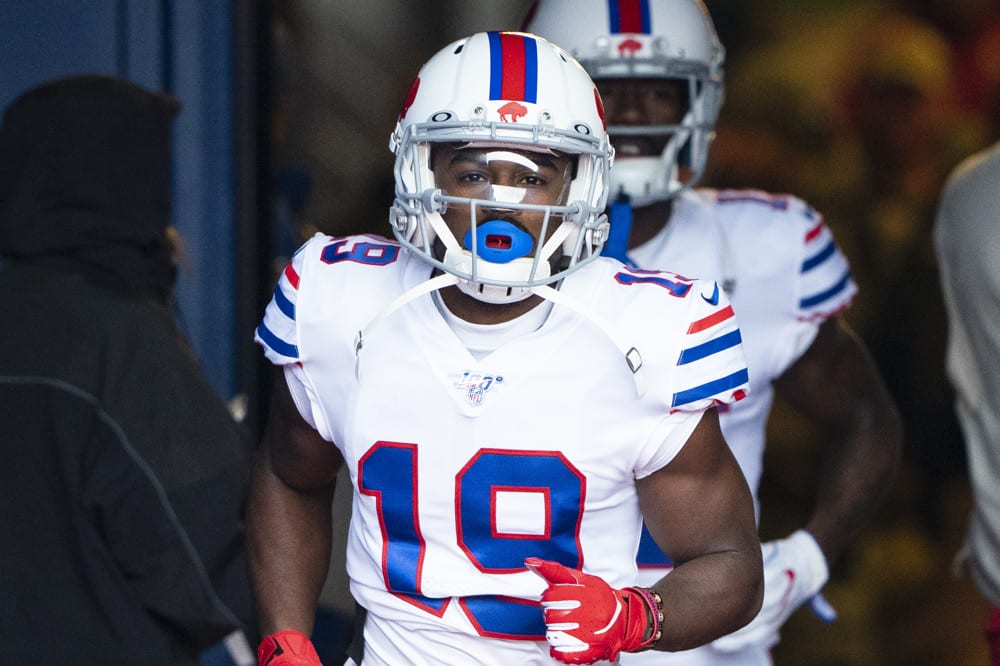 Isaiah McKenzie and the Buffalo Bills will help you Circle the Wagons for the NFL AFC Championship DFS Picks.

The Super Bowl dance card will be filled this Sunday as will your NFL AFC Championship DFS lineups. Four teams are left, only two will play for the Lombardi trophy. This week’s slate features some serious firepower and the potential for some astronomical fantasy point production. With that in mind, as you construct your roster here are things to keep in mind.

Trying to stack the power trio of Mahomes, Hill, and Kelce is an expensive endeavor. It will only leave you with $3,800 per player with Hill in the captain’s spot. On the flip side, having Stefon Diggs in your lineup with Josh Allen and John Brown backing him up will give you $5,100 per player to fill your roster. As is the case with every showdown contest, finding the lottery tickets on the slate will separate you from the rest of the field. The difference between you cashing and not comes down to one or two spots. The players below can help you fill those spots at the price points you’ll need to fill them.

He’s back and has reinserted himself into the surging Bills offense. Brown turned in an eight catch performance against the Browns last week in the Divisional round. This after he was a no show on the stat line against the Colts the week before. In the game against Cleveland, he had as many targets and as many catches as Stefon Diggs. Their only difference was in yardage total and the touchdown Diggs managed to secure. Brown was one of only five Buffalo receivers to register a catch.

This week he will face a Kansas City passing defense that scares no one. They are middle of the pack in most defensive passing categories. They will also be certainly focusing their attention on Diggs which opens up a chance for Brown to do some damage. In their regular-season meeting, both Diggs and Cole Beasley found the endzone. Since Brown’s return, he has taken the work from the injured Beasley. Josh Allen and the Bills will need a better showing this week than in the BIlls’ 26-17 week six loss. To get that, Brown will be called on to do great things. Having him in your NFL AFC Championship DFS lineups will do great things for you.

This play will hinge on the health of Clyde Edwards-Helaire. Should CEH miss this game, Williams will once again assume an increased role. With Le’Veon Bell also in danger of sitting this one out, Williams will see his stock rise even higher if both fail to suit up. Last week, he ran for 78 yards on 13 carries even with Bell taking snaps. He added four catches for 16 yards for a final tally of 13.4 fantasy points. In week 6, Edwards-Helaire enjoyed a huge day to the tune of 161 yards on the ground and four catches. The potential for a decent ground game this week is there.

Last week the Bills allowed the Ravens to accumulate 150 rushing yards. Of course, Baltimore has more rushing weapons than the Chiefs. This is evident by their yardage being spread out over four players. Kansas City lacks the number of rushing threats as the Ravens, but Williams is capable of handling the load himself. He should be able to find similar success against Buffalo as he did against the Browns. If he does, he’ll be a serviceable piece of a Mahomes/Kelsce stack.

This certainly was not the breakout season most were hoping for from Hardman. Last week though, he found himself as the third-best receiver on the Chiefs. His four catches for 58 yards landed him behind Tyreek Hill and Travis Kelce in both departments. Sammy Watkins has been out since week 16 and still limited in practice. If he is forced to miss another week, Hardman stands to see another week of increased potential. It’s always tough to predict which Kansas City receiver will play the supporting role to Hill and Kelce week to week. But the momentum is on Hardman’s side rolling into the Conference Championship game.

Hill was held to his lowest point total of the season in week 6 against the Bills. They had his number then and could have it again this week. Kelce will obviously be asked to step up if needed, but they will need another receiver to pick up some slack as well. The last time the two teams met, Demarcus Robinson was that player. Like every other pass catcher outside of the big two though, Robinson’s production has been inconsistent. Toss Hardman into an NFL AFC Championship DFS tournament lineup or two and ride his hot hand.

Here is another play that will hinge on the injury reports. Cole Beasley is still limited in practice. Gabriel Davis hasn’t practiced at all this week. While it’s likely Beasley still plays, Davis looks like he will miss this week’s game. If he does, McKenzie could see a couple more targets against the Chiefs. His impressive week 17 showing proves that there is big game potential from the young wideout. Snaring two touchdowns on six catches, McKenzie lit up the Dolphins en route to a 30.5 point day.

He was a non-factor last week though against the Ravens, but he still had more receptions than Beasley. He was also only one of five Bills to catch a pass. It’s clear that even if Beasley takes the field, his injuries are slowing him down. Without Davis there to soak up the extra targets, McKenzie will need to be the guy. Kansas City’s pass defense allows for several receivers on a team to be fantasy relevant. It won’t take much at his price to do just that. A double-digit fantasy day will have you seeing flames by his name and money in your pocket.