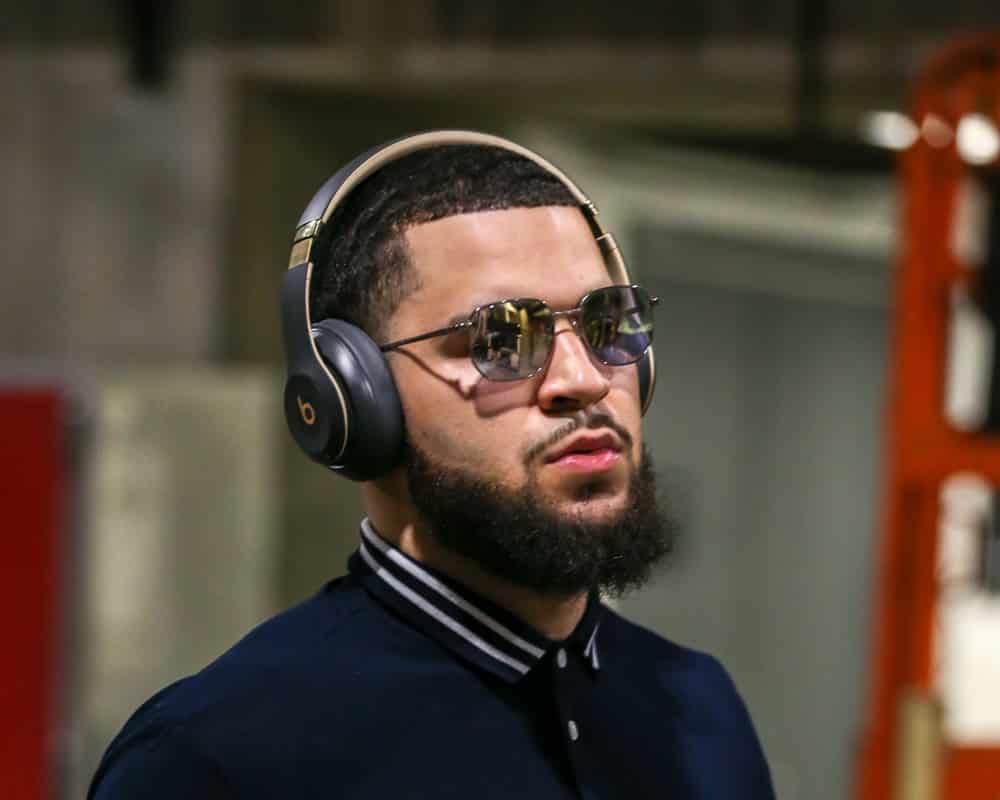 Hello my friends! Martin Luther King Jr. Day brings us a fat nine game slate of action. These games are broken into four different slates on DraftKings. Today, we’re going to take a look at a NBA DFS lineup I am playing for the 6:30 classic slate.

We could have paid up for some other options here. However, we’re going to start this lineup with one of the more cheap but solid options in Fred VanVleet. He’s been one of the most consistent players in the NBA in terms of DFS this season.

I feel like the first place lineup will almost certainly feature VanVleet at one position or another. His $7,900 price tag is the cheapest we’ve gotten him at since January 6th (five games ago). I know a bargain when I see one, so be sure to squeeze in some exposure to Fred VanVleet on Monday.

Dallas will continue to be shorthanded in most aspects of their rotation, and I believe Trey Burke is a great play for the price. He’s now seen at least 28 minutes of playing time in three straight games. He should continue to be a big part of the team’s rotation.

Keep an eye on Tim Hardaway Jr.’s status before getting a ton of exposure on Burke. However, he shouldn’t be heavily owned and he’s seeing plenty of time on the court. If he can even flirt with his January 9th effort where he shot 11-13 on his way to 29 points and 40 DFS points, then this is the play of the night.

At the SF position, I love playing Kyle Kuzma. His Lakers will take on Golden State, and the Warriors appear to be on the path for another lottery pick. Although Kuzma’s value has certainly dropped some this season, he’s still a vital part of the Lakers rotation.

We can all assume that the Lakers will cruise to a big win against Golden State. I figure that Kuzma will relied on a little heavier in a game that should be easily won. He’s averaging 21.5 FPPG so far this season. With a $5,500 price tag, you want to get some Kyle Kuzma in your lineups.

Although I’ve been burnt by him before, I’m dipping back into the well and taking Kelly Oubre Jr. at the PF position. He’s drawing a ton of criticism since joining his new team, most of it coming from his poor shooting so far. However, as the old saying goes good shooters figure it out.

Oubre Jr. has a career average of 42.8% from the floor and 32.2% from three.  This current shooting slump has to end at some point. I’d like to believe this will happen sooner rather than later. For the price of $5,400, I’m not going to pass on the chance to play Oubre Jr. on the off chance he finds his shot for the night.

This is the most expensive player in my lineup, but Christian Wood is worth it. He was already on pace for a career season before the Harden trade. Now, those who drafted Wood in season-long fantasy are licking their chops.

Wood has now topped the 50 fantasy points mark in two straight games. Victor Oladipo will make his Rockets debut which will benefit him even more. Wood is almost guaranteed a double-double, so make sure you load up on him in both your GPP and cash contests.

We continue to get Kentavious Caldwell-Pope at an excellent price. The injury report lists KCP as probable, so it appears as though he will play on Monday. He plays between 20-25 minutes each game, and he’s a consistent source of points.

Our other options here were Jalen Brunson or Damion Lee, but KCP is the most consistent of this trio. If he sits, then switch to one of those two guys. However, I expect him to play and should be good for his usual output of around 20 fantasy points.

One of the emerging faces of the rebuilding Rockets has been Jae’Sean Tate. I’m playing him at the forward position on Monday as a nice value play. He’s been an efficient shooter, hitting 48.6% from the floor. His average of 19.8 FPPG doesn’t quite do him justice.

With Harden now out of the way, there’s plenty of shots to go around for Houston. Jae’Sean Tate has been in and out of the starting lineup, and he hasn’t been disappointing very often. I like Tate to put together a nice effort where he tops the 25 fantasy points mark for the second straight game.

Coby White was a non-factor in Chicago’s win over Dallas last game. This being said, I expect him to return to the spotlight in a big way on Monday. He’s averaging 32.8 FPPG so far this season, and he looks to be on his way to a career season.

White only shot the ball five times last game. That’s six less shots than any other game this season. Before that, his lowest was 11 shots, and that was only one game. I believe Coby White will get back to shooting the ball and shooting it well. He’s a little pricey, but he should be worth it. 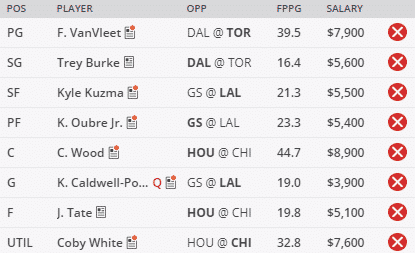