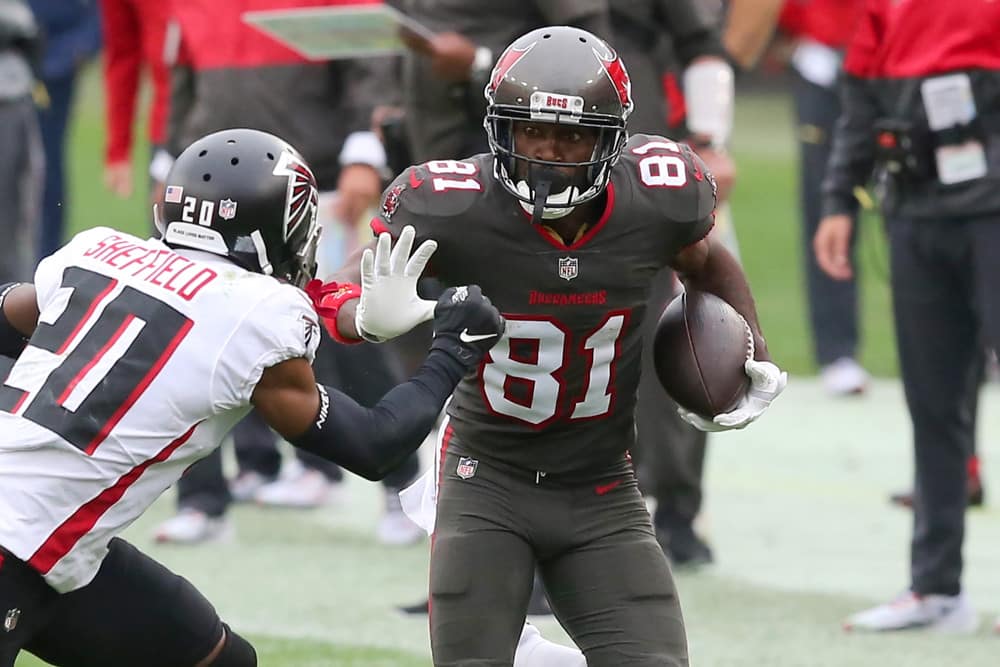 The Divisional Round of the playoffs continues with two potential NFL Playoffs DFS fantasy feasts. Cleveland takes the fight to Kansas City to face the high octane Chiefs. Then, Tom Brady continues his march to another Super Bowl appearance against the Saints. Injuries will play a factor on this slate so keep an eye on the inactive lists on gameday before locking in your lineups. If key players are out, it will be wise to know who stands to benefit. The following list contains some of these names.

As always, the players below are not meant to be considered “core.” These are simply players to consider as you are building your lineups. Play one, play them all, it is entirely up to you. My job is to help you see the reasoning behind selecting these players and how they can help you win. Good luck in your DraftKings Showdown contests.

When you share the same backfield as Nick Chubb, some overshadowing is to be expected. This is not the case for Kareem Hunt. Even as the second weapon in a two-headed backfield, he still managed to gain 841 rushing yards on the season. Add to that his 38 receptions for an additional 304 receiving yards. When you factor in his 11 combined touchdowns, you get a number one back on a lot of other teams.

He played a major factor in the Browns’ wild card win against the Steelers by finding the endzone twice on eight carries. Hunt finished the night with 19 fantasy points. There is certainly a standalone value here that comes at a deep discount from Chubb. Plus, if you are a believer in the revenge game narrative, then this is a matchup you want to exploit. The chance for Hunt to take it to his old team is reason enough to try him out in several of your tournament lineups.

In what ended up as an offensive bonanza last Sunday Night, Hooper enjoyed his fair share of the spoils. He snared seven of his 11 targets for 46 yards and a touchdown. Baker Mayfield leaned on his veteran tight end as Hooper led the team in targets. Counting the last three games of the regular season and the playoff game, he’s been targeted 37 times. This trend does not seem to be slowing down.

He should factor in against the Chiefs this week as well. Kansas City has allowed a tight end to score in three out of the last four games. Hooper’s shown his ability to reach the endzone. It’s something he’s done in four of his last six games. The fates are aligned for another double-digit day for Hooper. Feel free to get him into your Showdown lineups.

The Kansas City backfield has seen many twists and turns this season. Not the least of which is Bell joining the squad after his falling out with the Jets. Since becoming a Chief, he has scratched and clawed his way to a meager 254 yards on 63 carries. That said, he may be in line for some extra work with Clyde Edwards-Helaire not looking like a sure thing this week. If the rookie sits, Bell should assume lead back duties. Of course, that’s if Andy Reid doesn’t decide to throw a wrench in that play by including Darwin Thompson or Darrell Williams in the mix.

Should Bell be asked to step up, he’ll do so against a tough Cleveland rushing defense. Despite that, he should be involved in enough screen plays to make him valuable. Every catch he makes from the backfield counts as a point in DraftKings so you’ll take each one. He hasn’t been the Le’Veon Bell we’ve known in the past. But, just maybe he has enough in the tank to throw up a throwback game.

The embattled vet has enjoyed a resurgence over the last four weeks. In that span, he has registered at least one touchdown and double-digit fantasy points. All told, he has amassed 88.7 points in four games. That’s an average of just over 22 points per game. These points have come both with and without Mike Evans on the field. Tom Brady is hitting his postseason stride right about now and all of his receivers are the benefactors.

Something to monitor is the health of both Evans and Chris Godwin. While neither is likely to miss the week, both could be slowed by their injuries. If that plays out, Brown will have all the opportunities to go bananas. Brady has developed a trust he was supposed to have with Brown in New England. We’ve seen what happens when Brady falls in love with a receiver. Brown could be his new obsession which makes this week a great week to plug him into your lineups.

What you want in this case is for Drew Brees to find the same success as Taylor Heinicke did last week against Tampa Bay. The former St. Louis Battlehawk threw for over 300 yards against the Buccaneers. He also managed to make four different pass catchers fantasy relevant. If a former XFL backup quarterback can accomplish that, surely a future Hall of Famer can equal the task. If he does, Harris has a great shot at finding value.

Monitor the situation with Latavius Murray. He has not practiced this week as he has been hampered with a quad injury. The next man up could end up being Montgomery. New Orleans still uses both of their running backs despite having Alvin Kamara who could be a three-down back if they wanted him to be. So, if Murray were to miss Montgomery could get tapped to step up in his place.

The last time he touched the field was in the final game of the season. In Carolina, he carried the ball 18 times for 105 yards. He tacked on a single reception closing the night with a 14.7 point outing. His cost to those who rostered him? A mere $200 dollars. On this slate, he is a full $100 less. This means that for what he costs, the entire field is at your disposal and any points he gets will multiply his value a lot. Montgomery is worth a spot on at least one or two multi-entry rosters.