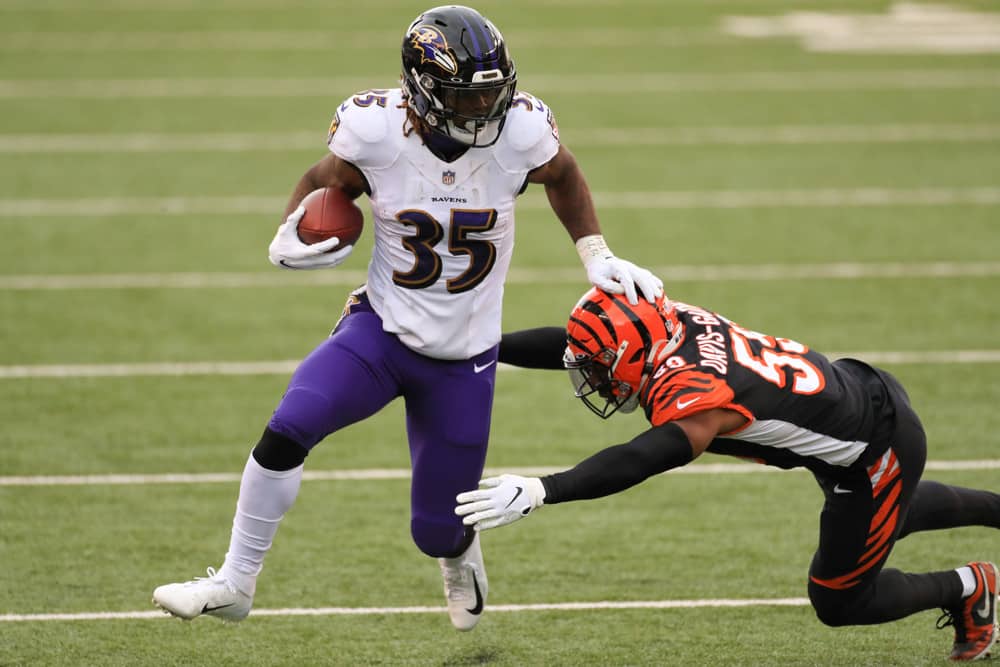 Football season continues and so to does the chance for you to profit from it on your NFL DFS Showdown lineups. The action begins on Saturday as the Rams travel to Green Bay in the clash of NFC titans. Then, we move to Orchard Park where the Bills will attempt to deepen their playoff run against the Ravens. These teams very much rely on the production of a handful of players. Loading up on the Josh Allens, Stefon Diggs and Aaron Rodgerses of the world is an easy call. Where the task gets more difficult is finding the right supporting cast to fill out your rosters. This is where this article is aimed to help.

The return of John Brown should have signaled a decrease in the overall value of Gabriel Davis. Turns out, the young wideout weathered the storm and put together an impressive Super Wild Card performance. He even managed to survive Cole Beasley’s return to the field and out performed him as well. Davis showed a lot of talent in spurts over the course of this season. In the regular season finale, he registered his only 100-yard game against the Dolphins. That game was played with Brown in and Beasley out. Never a bad idea to incorporate the spread when setting your DFS lineup and it’s worth noting the Bills are -2.5 favorites.

I’m hoping for similar outing to last week, with the chance Davis adds a touchdown to that tally. He is getting Josh Allen’s attention with or without Beasley or Brown which is a good sign. Since week 9, he has seen at least four targets in all but one game. Davis fits nicely into a Buffalo stack with Allen and Diggs in a tournament lineup.

Consistent fantasy production from any Packer not named Rodgers, Adams, or Jones is hard to find. There is enough upside on the roster to take a chance on one or more of them. The lottery ticket that is MVS will pay off only if he can produce one of his “boom” games.

When he’s good, he’s really good. All of his big games have resulted in at least 17 points, with his biggest earning just shy of 28. On the flip side, his potential for no, or even negative points, looms large for this play. This does make him a risk/reward NFL DFS Showdown play.

So what makes him someone to consider this week? The answer is salary relief. Davante Adams will take a giant chunk of your cap room, especially if you want him as a captain. If you stack him with Rodgers, you will be looking for players in the range of MVS to round out your roster. What you are also hoping for here is for the majority of players to lean towards Allen Lazard. For some reason, there are many who consider him the better play of the two. Lazard’s floor is similar to that of MVS. The edge though, goes to Valdez-Scantling in that he has flashed his ceiling more times this season than has Lazard. Not to mention, Lazard is still dealing with a couple injuries that could hamper his production.

It’s hard to compete for carries with your own quarterback, which is the position Gus Edwards and J.K. Dobbins find themselves. Despite this, both find ways to stay fantasy-relevant. In fact, Edwards has put up better stats than his price suggests. Even playing third fiddle to Jackson and Dobbins, he has five double-digit fantasy point games this season.

Gus Edwards was not to be denied 🚨 @Ravens

Last week was the first time since Week 12 that he failed to reach 8 points. If he manages to hit his 12 point average over that five-game span, he will crush more than four times his value. This is the kind of upside you are looking for in a value play like Edwards. Less savvy people will be thrown off his scent. That will gain you leverage over the field should he pop off. You can get a leg up by sliding him into your NFL DFS Showdown rosters.

Zack Moss has landed on the injured reserve. This lands T.J. Yeldon as the change of pace back behind Devin Singletary. There is a large possibility that Singletary will not change pace all that often though. Even still, Yeldon carries with him a chance to kill value should he get the work. In his best game of the season, he rushed seven times for 52 yards. He also caught a 22-yard touchdown pass. All told, it was good for a 14.4 point day.

This probably won’t be the stat line you he puts up this week. But, he will get extra work without Moss on the field, so the potential for an 8-10 point week is there. Don’t go too heavy on him if you are using multiple lineups. That said, a share or two could put you in the green should he manage to find double digits.

Picks for Every NFL Game