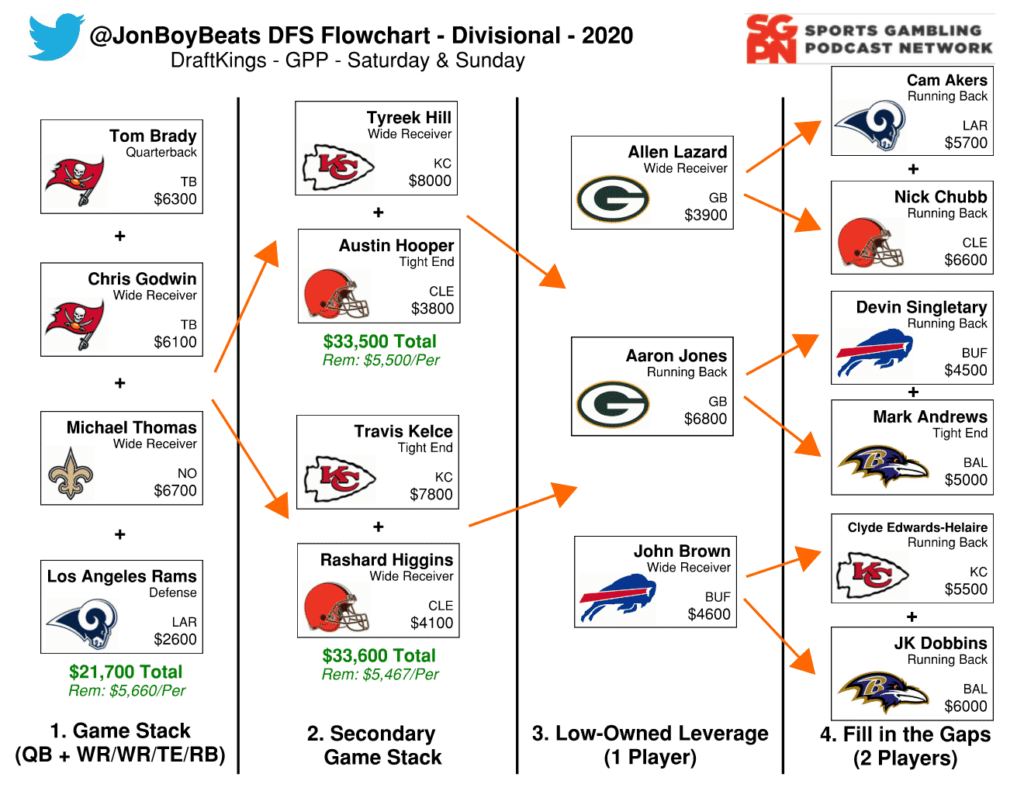 The Divisional Playoffs are officially upon us! Unfortunately, after locking in for almost 18 hours of football during the Super Wild Card round, the schedule looks a bit disappointing this weekend. Although we won’t have all-day long action, the matchups themselves should not disappoint in the divisional round. I think there is a real argument that all of these games will land within one score, which makes it extremely fun from a DFS and betting perspective. This round’s DFS flowchart is here to help you cash.

We were rudely awakened in the Wild Card game by the late-night hammer game between the Browns and Steelers. That game is just about as far as you can get on the improbable outcome spectrum, but all the Roethlisberger triple stacks that shot up the leaderboards last weekend aren’t too worried about it. Fortunately, in the flowchart, we had a decent amount of exposure to that game to make up for the Corey Davis goose egg on Sunday morning. On the topic of goose eggs, John Brown’s performance on Saturday was very tilting, but at least a lot of our Josh Allen lineups still ended up cashing.

The four-game divisional slate on DraftKings this weekend is a really challenging one. The full weekend slate is their focus over at DraftKings, and I hope the public fills these contests up to prove that it was a smart choice. Not only are a lot of the matchups enticing from a game script standpoint, but the pricing is also tight. To stack up some of the high-priced receivers you are going to have to fit in some scrubs that have goose egg potential. Before I jump into the flowchart analysis, I want to give a macro-level overview of how I am viewing the slate in this DFS flowchart.

If you haven’t read my introduction to the Week 15 Saturday flowchart, I would encourage you to do so to help get your brain into a small slate thought process. The one point that I want to clarify this weekend is the salary piece. Due to the pricing feeling pretty accurate this weekend, and with the number of good players scattered across these 8 teams, I am going to be trying to maximize the $50k salary. I would not recommend leaving too much salary on the table, because I feel like there are better ways to differentiate.

I believe that a lot of people will be starting their build at the wide receiver position this weekend. Davante Adams, Stefon Diggs, Tyreek Hill, and Michael Thomas are all elite options in the passing game and priced up accordingly. I think it is going to be hard to pair multiple of these players together without really scraping the bottom of the barrel. Once the receivers are paired up with their quarterbacks, I think a lot of people are going to be trying to find some value at running back.

Devin Singletary is the lead back in Buffalo now, and Kareem Hunt will be a projected game script darling. If going with the stars and scrubs approach, I would caution everyone to be extremely mindful of ownership projections. I think a lot of people will be going this route, so you will need to be thoughtful of how to be different.

In addition to pairing up some of the high-priced WRs with QBs, a lot of people will be double stacking teams. Most of the high salary guys have a low salary option to pair with and seem like obvious choices. What we are going to do this weekend is zig when others are zagging. I have said all season long that people aren’t double stacking enough, and that helped pay dividends in the regular season. Now when it comes to this four-game slate, with a ton of great players, I am going to opt for a single stack.

Tom Brady and the Buccaneers put up two poor showings against the Saints in the regular season. I’m not going to spend too much time breaking down the previous matchups, but I will say it’s going to be tough to bet against Brady in the playoffs going up against a team for the third time. I really like Chris Godwin here to stack with him. Typically, I am not one to bet on or against cornerback vs wide receiver matchups. With Mike Evans going against Marshon Lattimore this weekend, it just feels like an unnecessary risk to take with this already spread-out TB receiving corps. If you are making 20 lineups with the flowchart, then I don’t mind swapping in Evans and Antonio Brown in a few of them just to help diversify.

Playing on the narrative that Tampa Bay is going to be able to keep this game competitive, and maybe even play with a lead, then I really want to focus on the Saints’ two primary weapons. When the going gets tough, I think Drew Brees is going to pepper Alvin Kamara and Michael Thomas with opportunities. Thomas stands out at his $6700 price tag, which is almost $2,000 lower than Davante Adams this weekend. I think this game turns into a bit of a track meet, and if that’s the case I want to count on the target volume of Thomas for this weekend’s DFS flowchart.

Since our primary game stack didn’t include any of the 10 highest priced players on the slate, it provides us a lot of options to hammer the mid-range value players who should have some more stable production. Before we dive into this mid-tier, I want to make sure I have some Kansas City studs.

It’s not a stretch to say the Chiefs are coming into the playoffs on a bit of a cold streak. Mahomes and the gang have not looked the same since Clyde Edwards-Helaire went down with an injury. While he wasn’t having a standout season by any means, I think CEH helped unlock a lot of things that their offense relies on. All signs are pointing to CEH being back this week, and the Chiefs have the highest implied total on the slate by a wide margin. I do think that the Browns will be able to put up a fight this weekend, so I like pairing the Chiefs’ studs with a cheap Browns pass-catcher. Travis Kelce is the highest priced TE available this weekend and will probably be the most owned.

Pair him with Rashard Higgins in lineups. On the flip side, we all know what Tyreek Hill is capable of against this Browns secondary. I like pairing him up with Austin Hooper here. This secondary stack is going to be a pretty critical piece of the flowchart. A lot of people playing Mahomes will have these pieces, but I think they might go relatively unowned outside of that (the Browns players that is).

What is said above regarding cornerback vs wide receiver matchups is true, but you will note that I don’t have Davante Adams on the flowchart this week. Personally, I think he is going to give Ramsey trouble all day, and I do not expect Adams to get shut down. If he has a great game, the price disparity between him and the rest of the stud WR group makes it so that the opportunity cost isn’t as high compared to some of the regular-season slates. I think Adams would have to outscore all other WRs by 6-8 points to truly hurt you, and I don’t see that happening.

Given that, I really love Allen Lazard and Aaron Jones for the Packers this week. Lazard should be the biggest beneficiary if a couple of targets don’t go Adams way due to tight Ramsey coverage, and at $3900 he doesn’t need much more than that to pay off value. Aaron Jones on the other hand has two-touchdown upside and could end up the highest scorer on the slate at $6800. The Rams have faced a pretty weak schedule of running backs over the last half of the season, and I think the explosive Jones will be a shock to the system. John Brown is the last value leverage piece this weekend. He is fresh off his zero-point performance on Saturday against the Colts, but the opportunity was there (40 routes on 41 dropbacks). Go back to the well on John Brown in this week’s DFS flowchart.

Mid-Priced Players to Fill the Gap

It may be making you nervous that we don’t have many of the high-priced studs in the flowchart this week (outside of Hill/Kelce). Last weekend, we fully faded Henry and Kamara and it turned out just fine (before the Pittsburgh fantasy explosion), so it’s definitely possible to have success this way. Plus, I really like a lot of the mid-priced guys this week.

Devin Singletary and Cam Akers will be the highest owned of the players this week in the last column. This makes sense at their respective price points and current share of the backfield. Nick Chubb is a bonafide stud who paid off for us last week. JK Dobbins is a star in the making who comes in riding a 7-game touchdown streak. Mark Andrews and Clyde Edwards-Helaire are both players who we are hoping to get back to their mid-season form. They both come in at a price point that doesn’t feel like we are stretching out too thin.

I’ll leave you with one more piece of advice this weekend, which will also hold true in next weekend’s two-game slate. It’s better to narrow in on a few strong stances this weekend and build some optionality off of those, rather than to try and cover your bases too much and spread your bankroll thin. If you have a conviction on a team or a player, then go all-in. When there are so many good options in a short slate, it won’t help to have 5% of the one that really separates. Trust your gut and build some DFS flowchart winners!