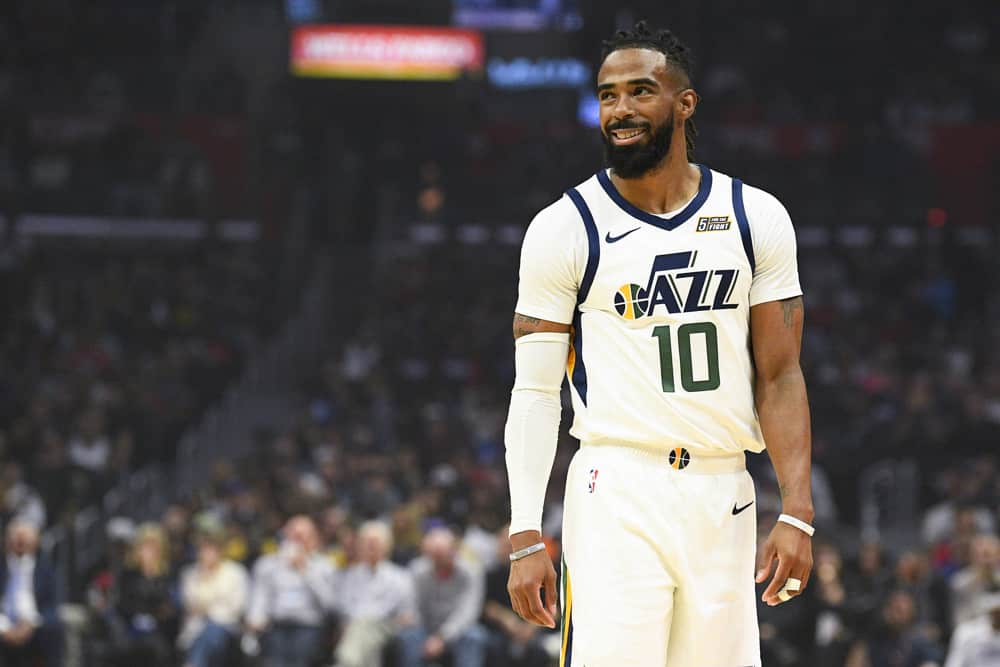 Happy Friday everyone! There’s a juicy five game slate today, and I’m here to share my NBA DFS plays. This is one of those slates where playing chalky isn’t the best idea. That being said, this is who I like for DraftKings GPP contests for this lovely Friday.

We’re going to start off Friday’s lineup with the trusty veteran Mike Conley. One year’s time makes a difference as he is putting together one of his best years so far. There is obviously more chemistry between the Jazz, and Conley has been fueling the fire thus far for the team.

What makes Conley a great DFS play is that he can contribute across the stat sheet. Even on nights when his shots aren’t falling he will still score around 30 fantasy points. I love the consistency you’re getting from Conley, and it comes with an added benefit of a cheaper price tag.

They say to always go back to the well, so I am playing Dillon Brooks at the SG position. It’s been an up and down season so far from him. However, one thing is certain. The shot attempts have been there for Brooks. In fact, he’s taken no less than 13 shots in any game this year.

I love to roster players who are coming off of a down game, and this is the case with DB. He shot 4-15 two days ago against Minnesota and scored a season-low 19.5 fantasy points. The Grizzlies play the T’Wolves once again Friday and I believe that DB will get back on path with a solid all-around game.

This is somewhat of a risky play, but I’m sticking with Bojan Bogdanovic at the SF position. The 2020-21 season has been rough so far for Bogey, but good shooters always figure things out. I believe he will benefit from a less-than-stellar Hawks defense on Friday.

Bogdanovic is fresh off a 6-10 shooting night. This was only his second game of the season shooting over .500, however this doesn’t make me worry. All we need is for him to get a couple threes to fall and find his rhythm and Bogey will be the steal of the night at his cheap price.

We’re finishing up the second stack in this lineup with the second year stud Brandon Clarke. Things are looking up for him after a rocky start to the campaign. He’s now scored double digit points in five straight and he’s topped the 40 point fantasy mark in two of his last three contests.

As I mentioned earlier, Memphis plays Minnesota for the second straight game. BC just dropped 19 points with nine rebounds, three assists and three steals on his way to 40.75 fantasy points. I believe he can replicate this effort against a weakened Timberwolves squad.

The pricing on Tristan Thompson on this slate is downright disrespectful. Sure, Orlando isn’t the best matchup for Boston. However, there should be plenty of room for opportunity for Thompson in this match. The Celtics have run into some COVID issues, but he’s already cleared league protocol.

Boston will be without Robert Williams who tested positive, and it’s unclear whether Daniel Theis will be cleared to play or not. Even with Theis in the rotation, I figure that Thompson will see the bulk of the load given Nikola Vucevic will be the center for Orlando. Don’t hesitate to play TT and be grateful you’re only paying $4,800 for him.

For the guard position, I am taking the Lakers PG Dennis Schroder. He’s been the face of consistency so far this season in terms of NBA DFS. He’s been sticking around the 30 fantasy point mark, and I expect around the same from him on Friday night.

The Lakers take on New Orleans, and the Pelicans aren’t exactly the best defensive team. Shot efficiency has been somewhat an issue this year for Schroder. However, he’s still been a good option to play since he can pick up assists and other things to make up for nights where his shots aren’t falling.

You’ve got to have a low ownership player in your GPP lineups, so I’m taking Hamidou Diallo at the forward position. This is a boom-or-bust play, but I like the upside here. He’s consistently seeing at least 20 minutes a game, and he’s been efficient in his time on the court.

Despite being in a limited role, Diallo has now shot at least .500 in seven straight games. He scored 43.25 fantasy points in two straight games a few games ago as well. Although I’m not expecting this output on Friday, I expect a solid 20-25 points from Diallo so I’ll take him as a value play with the potential for a boom.

This is a pricy play, but I’m going to take Julius Randle for the moment. He’s been the face of the Knicks for a few years now, and his 48.1 fantasy points per game average lands him fifth on the slate in that category. If Jarrett Allen is unavailable for Cleveland, then Randle will have a hell of a game.

If Allen plays for the Cavaliers, then we have a few more options to switch to. I recommend playing Vucevic or Trae Young if Allen suits up, but Randle may not be a bad play even with Allen on the other side of the court. You can switch these three around here, but for now we will go with Randle. 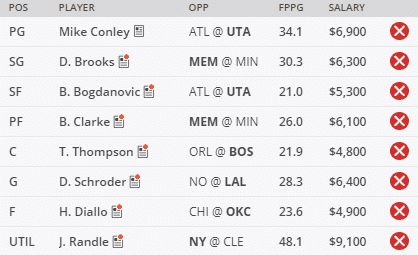