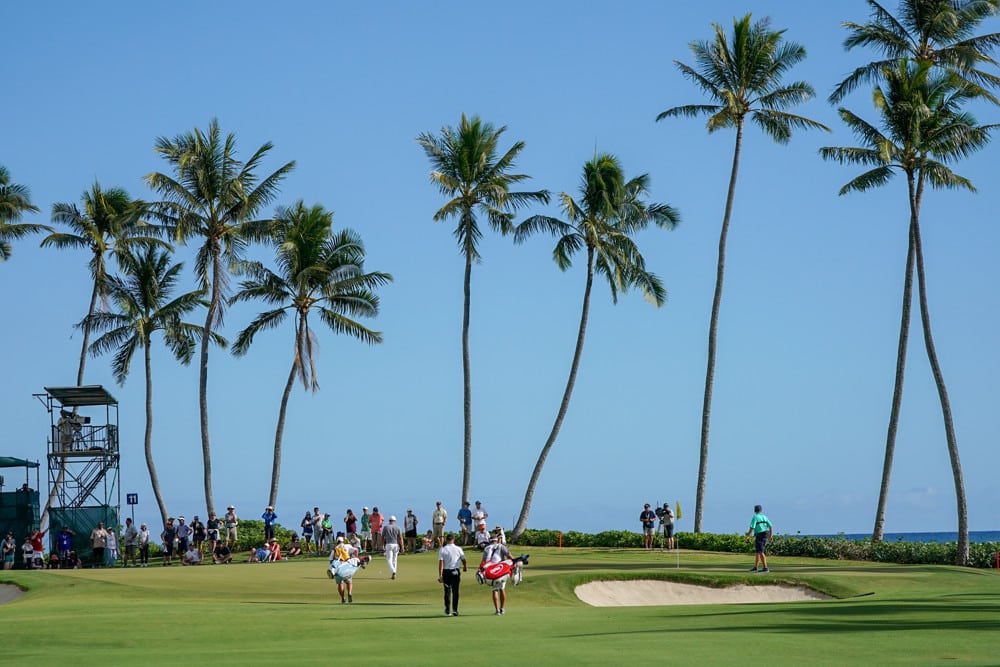 The PGA Tour rolls on to the first full field event of 2021. This week 144 of the best players in the world head to Honolulu for the Sony Open at Waialae Country Club.

Here’s everything there is to know about the Sony Open tournament before placing a single wager on it.

30 players who played the Tournament of Champions will hop over to O’ahu to play the Sony Open. Among this group includes Webb Simpson, Patrick Reed, Adam Scott, Hideki Matsuyama, Daniel Berger, Sungjae Im, Colin Morikawa, Viktor Hovland and Harris English. They look to put a bow on the short Hawaiian swing with a quality finish.

Also in the field this week are notable players making their 2021 debuts after strong showings in the fall. Among those players include Emiliano Grillo, Russell Henley, Zach Johnson, and Si Woo Kim. All four hope to carry the good form they had in 2020 into 2021.

The golf course was designed by Seth Raynor and opened shortly after his death in 1926. Seth Raynor is responsible for some of the most iconic and classic golf courses in the United States. His legendary design portfolio includes the Old White TPC at the Greenbrier, Chicago Golf Club, Fishers Island Golf Club, the Country Club of Charleston, and the Dunes Course at Monterrey Peninsula.

The course was originally 6,600 yards from the championship tees and was heavily influenced by other notable golf courses around the world. Since it’s opening, the course has undergone a lengthening to just over 7,000 yards and a few minor tweaks. Overall, it still has retained most of its charm as a time capsule into golf’s past. 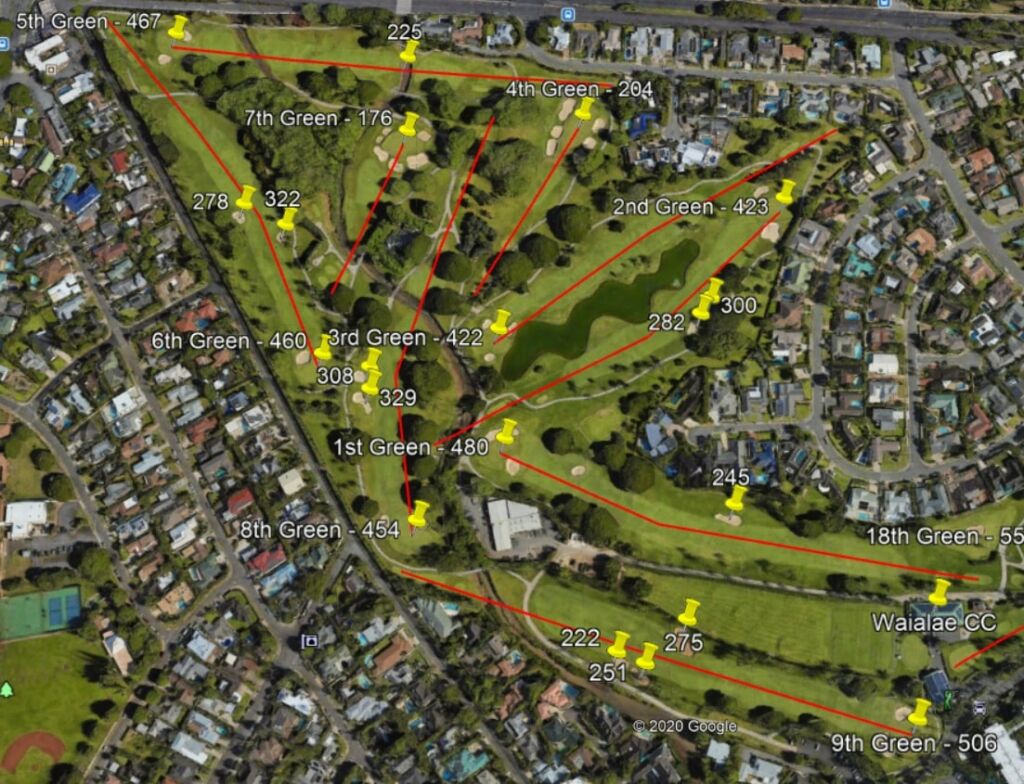 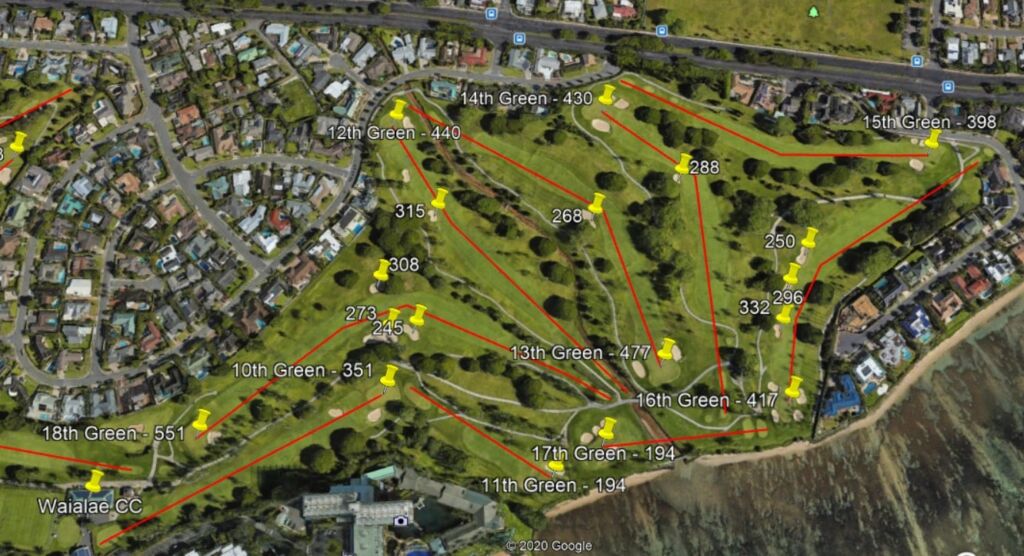 Waialae is a second shot golf course where the angle of approach is more important than distance. The Bermuda greens at Waialae are some of the purest on tour. The greens also have some creative sloping to create some interesting pin positions. It becomes vital to make sure they’re on the correct side of doglegs to go at them. Wind could also be a factor, especially on the second half of the Back Nine that plays closer to the beach.

There are similar concepts for both holes. Each are long slightly doglegged Par 4’s (at least for the professionals) with the slope of the greens from front-to-back running almost opposite to the direction the fairway, feeding towards a deep green-side bunker on the lower left-handed quadrant of the green. Both holes also encourage players to take aggressive lines down the right side of the fairway. There is plenty of room to bail out left on both holes, but that provides a less than optimal angle to the pin. Tee shots down the right are more risky, but provide beautiful angles to the green. The 1st at Waialae gives the pros a true test right out of the gate on a very popular hole template for golf architects.

If you really want a deep dive on why Par 3’s that feature a Redan green are so popular with golf nerds, may I suggest this post written by Andy Johnson of The Fried Egg. Simply put, Redan templates are Par 3’s with right to left sloped greens, guarded with a back right bunker. As far as the 17th at Waialae, it’s the most exposed hole on the golf course to the wind. Given the combination of both a small green and its sloping from right to left, a par is a very good score on this hole. Any tee shot that finds its way into one of the three bunkers off the right side of the green is pretty much dead.

The 17th green was restored before the 2018 Sony Open by famed modern golf architect Tom Doak. He added quite a bit of movement to the green to restore it to its true “Redan” nature. This was met with some criticism from the players. They complained that the green was a bit too firm and difficult to stop the ball. Given that the players cry wolf about the slightest of adversity, it’s not surprising that they demanded they speak to a manager. Over time, greens get softer and softer as it sees more foot traffic. Given that the hole is three years out from the renovation, players should keep their criticisms to a minimum.

Handicapping how Waialae Country Club will play isn’t an easy task. According to DataGolf’s relative skillset plot chart, it’s one of the least correlated golf courses on the PGA Tour: 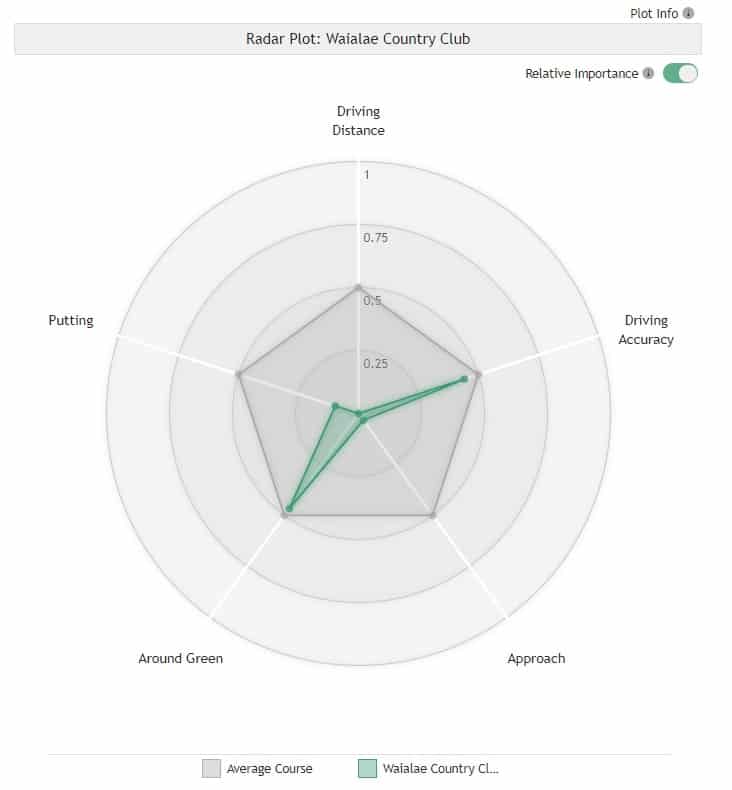 The leaderboards at Waialae are often very diverse in terms of skillsets. I chalk it up to the layout of the golf course and what the players face off the tee. The golf course has many dog legs protected by tall palm trees and inconveniently placed bunkers. While some holes do give players the option to pull driver, the smarter approach sometimes is to sacrifice distance for accuracy to navigate around the trouble spots off the tee. There’s also not many opportunities for a longer hitter to cut off a dog leg to access landing zones inaccessible to a shorter hitter. As such, Waialae Country Club does a great job leveling the playing field.

While driving accuracy appears to be the most correlated skill among those towards the top of the leaderboard, it’s not a prerequisite as much as other golf courses either. As long as a player avoids the bunkers and hits their tee shot on the correct side of the fairway, there’s not much penalty to being in the rough or the fairway. The greens are receptive enough to allow a player to keep the ball on the green from both the short and long grass. While bettors should skew slightly towards a more accurate player off the tee, an inaccurate one can have success as well.

There are, however a few notable trends and key stats that bettors can use to identify plays and fades. In terms of outrights, seven of the last nine winners played the week before at Kapalua. As mentioned earlier, thirty players in the field this week played the Sentry Tournament of Champions. This group of thirty also include many of the top players in the field. The odds are very good one of them will walk out of Waialae Country Club as the winner.

Second, the golf course tests a players performance in their mid to long irons. Twelve of the 18 approach shots into the greens at Waialae are from 150-200 yards out. This is in stark contrast to last week at Kapalua, where wedge play was tested the most. Consulting proximity and strokes gained performance from this range will provide clarity into those likely to succeed this week.

Next, from a layout perspective Waialae is a classic design. It reminds me of other PGA Tour golf courses like Colonial Country Club, Sedgefield Country Club, Harbour Town and Sea Island. These places are a favorite for those who don’t rely as much on distance to gain an edge. Their strengths are with their approach game and scrambling. All of them also feature Bermuda grass, similar to Waialae (however Colonial Country Club greens are bentgrass)

Lastly, players in the field this week with at least 12 rounds at Waialae who gain more than a stroke per round on the field in their career include the following:

A few players here have some length off the tee,  and there’s a mix of accurate and inaccurate ones as well. A common link between all of them is they generally lean on their mid to long iron game to gain an edge on the field, and they’re relatively good scramblers. There’s also several names here that also do well at the correlated golf courses mentioned above.