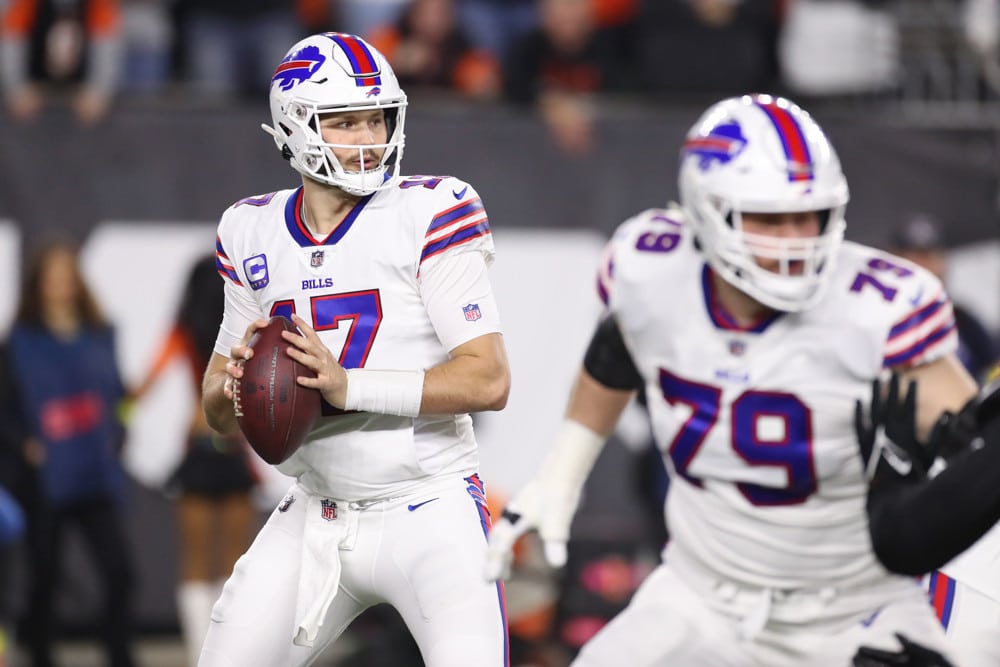 It’s Super Wildcard Weekend! Undoubtedly one of the most exciting and unpredictable weekends on the entire sports calendar. This can also be an extremely tough weekend to navigate when it comes to your sports wagers.

Fear not – the team at SGPN is here to break down all of the stats and weave through all of the chatter to find you the best bets of the weekend. Let’s lock in on the Sunday/Monday slate and talk about some of the best bets going into Wildcard Weekend.

No One Circles The Wagons…

The Bills (-900 at WynnBet) are heading into this home playoff game with an impressive home-field record of 7-1. The Bills finished the regular season with a top-two scoring and passing offense. Buffalo will look to continue to dominate in the air versus a Miami Dolphins (+600 at WynnBet) pass defense that ranks bottom-five in the league.

The Bills have scored 30+ points in their past three games and will look to continue the offensive momentum against a Miami team that ranks 24th in opponent points per game.

But it’s the playoffs, right? Certainly, you cannot lay this many points in an NFL playoff game. You would be incorrect. Unfortunately for the Dolphins, history may not even be on their side. Going into today, teams that are double-digit underdogs are 2-11 ATS since 2010.

This is a tough ask for rookie quarterback Skylar Thompson, who is completing just 57.1% of his throws in seven games (two starts) and averaging 5.1 yards per attempt.

As my colleague Cody Zeeb discussed when talking about Brock Purdy, rookie quarterbacks are 4-7-1 ATS on Wild Card Weekend in the last 20 years. I would look to back the Bills (-13.5 at WynnBet) in this spot against a deflated Miami offense and an unimpressive defense.

When you think of the New York Giants (+3 at WynnBet), you don’t necessarily think ‘offensive juggernaut’; but versus this Minnesota defense, it’s quite hard not to have confidence in them. The Vikings’ defense ranks 31st in opponent passing yards per game and 28th in opponent points per game.

The Vikings’ games have gone OVER in six of the last seven games. It’s important to note that only under came when they pulled their starters in Week 18. The Giants have been no slouch on offense either, scoring at least 20 points in six of their last seven games. Again, the only exception was when they rested the majority of their starters in Week 18.

I would tend to lean over here because the Vikings just have a habit of putting themselves in a hole and trying to dig themselves out. WynnBet has this total at 48 (-110), and I’m hard-pressed not to take this over. This has the makings of an exciting wildcard weekend game. It’s a game where both teams should score 20+ points.

Sunday Night, the NFL will treat us to a classic AFC North ‘knockdown drag out’ battle between the Bengals and the Ravens (+8.5 at WynnBet). The Bengals come into this game with the top-ten scoring offense, averaging just over 26 points per game.

However, Baltimore is looming, and their defense is ranked in the top three in opponent points per game, allowing an average of only 18 points per game.

Another important note is that the Bengals will be without two of their starting offensive lineman. The Ravens will be chomping at the bit to get their hands on Joe Burrow. Baltimore finished the season with the highest blitz rate of any team in the league, sending their guys an astounding 46% of the time.

The Ravens are 3-1 ATS this season as underdogs. This team does not get blown out. The Ravens have the formula to keep themselves alive in this. They run the ball, rely on their quarterbacks’ legs, and they play near stout defense. I like the Ravens (+8.5 at WynnBet) to cover the spread and keep this game low scoring. I also like the UNDER (40.5 at WynnBet) in this matchup.

A prop bet I am jumping on as well is Joe Mixon UNDER 55.5 rushing yards (-120 at WynnBet). Mixon has only gone over this total TWICE in his past six games. I would look to fade Mixon in this matchup versus the #3 rush defense in the league.

The Ravens’ defense is holding teams to an average of 98 rushing yards per game. You mix that in with the fact that the Bengals are starting two backup linemen, and RB2 Samaje Perine is still getting a 5+ carries a game. I lean under here on Mixon.

Cowboys Running Into A Wall In Tampa?

I’m sure you have heard this by now, Tom Brady is 7-0 against the Dallas Cowboys (-2.5 on WynnBet). In an attempt to get his 8th Super Bowl, he will have to beat America’s team for the 8th straight time. I like the Buccaneers to win and cover this spread at home versus the Cowboys, who are 4-4 ATS on the road.

The Buccaneers’ key to success will be through their defense and stopping the run. The Buccaneers need to put Dak Prescott in ‘must-pass’ situations and force turnovers. Luckily for the Buccaneers, they will have both Akiem Hicks and Vita Vea on their defensive line.

When both of those guys are playing, the Bucs are 6-1 straight up. For that reason, I also like Tony Pollard to go UNDER 47.5 rush yards (-110 at WynnBet). The Cowboys were held to less than 75 total rushing yards the last time they played the Buccaneers in Dallas.

I also like Dak Prescott OVER .5 INTs (-175 on WynnBet) for this very reason. It might be a lot to lay on an interception prop, but Dak has thrown 11 interceptions in his last seven games.

If you don’t feel comfortable laying that much – it’s certainly something to throw into a Wynn ‘Bet Build Your Own Bet’!

How much does it help the Bucs if Akiem Hicks and Vita Vea both play Sunday vs. Carolina? Tampa Bay is 5-1 when both play 10+ snaps, 2-7 when either one doesn't. They give up 88.9 rushing yards per game with both playing, 141.2 when one doesn't.

Thanks for checking out the Wild Card Best Bets article presented by the Sports Gambling Podcast Network. Check back daily for more SGPN betting content!