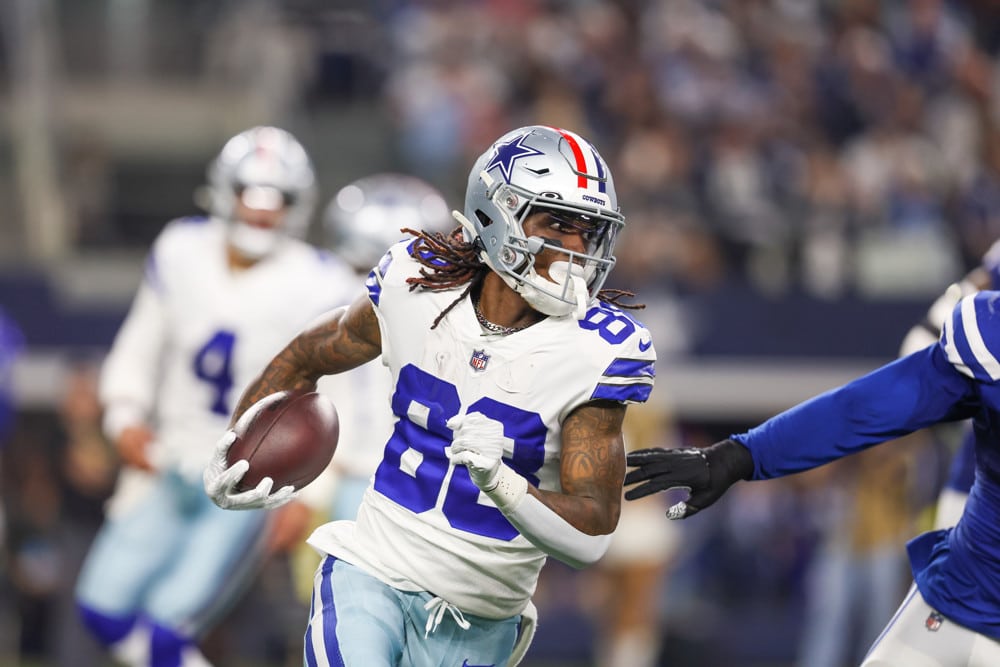 Welcome to the Sports Gambling Podcast Network’s Top 10 NFL Week 18 DFS Stacks article! Each week of the NFL season, I break down the DraftKings main slate to bring you the top 10 DFS stacks.

Each week the stacks in the top 10 will include a variety of these stacks based on the scoring upside and likelihood of appearing in an optimal DFS lineup and above the pay line. Let’s dive into the Top 10 NFL Week 18 DFS Stacks.

The Dallas Cowboys need a lot of help to snatch the top seed in the NFC playoffs. The good news is that the two teams that need to lose for a Dallas win to vault them into a first-round bye are playing in the same late window on Sunday afternoon.

This means the Cowboys will need to put their noses to the ground and simply focus on beating the Commanders and let fate have the rest. The Eagles are favored over the Giants, and the 49ers should handle the Cardinals easily.

The Cowboys won’t have time to watch the out-of-town scoreboard and shouldn’t have any trouble lighting it up against a Commander’s secondary that was barbecued by Cooper Rush and CeeDee Lamb in Week 4.

Washington is a pass funnel and one that has no answers for Dak Prescott and his weaponry. Another sneaky stacking option in here is TY Hilton, way down at $3.4k. He is already in sync with Dak and has made some huge plays down the field in the clutch.

If you subscribe to the narrative that Dallas will handle Washington and run away with a win, you must be excited about Sam Howell’s debut. The rookie from North Carolina throws a fantastic deep ball and has similar pocket mobility to Gardner Minshew.

The Commanders have a trio of WRs who can get open for big plays on this tattered Cowboys secondary. I love both Terry McLaurin and Jahan Dotson at cost this week, along with a nod to short-yardage YAC weapon, Curtis Samuel. I have found so many useful DFS stacks from this game that I might not stray from it.

The Seahawks are in a must-win game versus the Rams. The good news is that the Rams packed up their disastrous title defense season a long time ago. They have ridden the legs of Cam Akers for three weeks running, while the passing attack has been anemic at best.

Geno Smith and DK Metcalf were fantastic in the first meeting between these two teams. Tyler Lockett‘s return to the lineup last week gave Geno a needed jolt after a tough stretch without him. This stack won’t be overly chalky, especially since this RB1 stretch for Akers has not dissipated how much he is hated by the fantasy community.

Did you know that, with 14 receptions this week, Austin Ekeler will supplant Christian McCaffrey for the most by an RB in a season in NFL history? It’s true. While that seems like a lofty figure, Ekeler has actually reached it twice this season already.

The Chargers’ defense has been middling this season, with a great many injuries to star players. They will have a fully healthy Joey Bosa this week against the Broncos and possibly Derwin James. Denver’s offense has been an abject disaster with Russell Wilson, while their defense is getting shredded by opposing RBs. This stack has a ton of upside.

Lost in the excitement of Elijah Mitchell and Deebo Samuel returning to re-stock the 49ers’ offensive artillery is the foolproof rule of playing TEs against the Arizona Cardinals.

Brock Purdy will be plenty popular this week in DFS, but I would venture an educated guess that George Kittle will not be as chalky as Deebo Samuel or Christian McCaffrey. He might not even be as chalky as the red-hot Brandon Aiyuk. All of these guys are worth stacking in this game, but I will have more exposure to Stone Cold Kittle this week.

It isn’t clear how many bullets Old Man Flacco has in his right arm. With how many passes he attempted to start the season, I can’t imagine the Jets will try to establish the run this week either.

Garrett Wilson should be the easy choice for Offensive Rookie of the Year but will need a big game this week to beat Kenneth Walker and his Ohio State teammate Chris Olave.

For any WR, especially a rookie, to produce 1,000 receiving yards with a ghastly trio of Flacco, Zach Wilson, and Mike White under center is both remarkable and understated. His receiving teammates Elijah Moore and Tyler Conklin are also good options to stack with Flacco against the very shoddy Dolphins secondary.

The Cincinnati offense owns the Baltimore defense. Although the Ravens succeeded in slowing the Bengals’ passing attack down in a Week 5 win, that game saw Tee Higgins knocked out in the first quarter with an injury.

The best double stack in the NFL is alive and well against an abysmal Ravens secondary that has had the privilege of only facing one good passing attack since their Week 10 bye. In that game, they were shredded by Trevor Lawrence and the Jaguars and lost 28-27.

Whether or not Lamar Jackson is ready to finally return from his knee sprain (likely not), Mark Andrews is the only trustworthy receiver the Ravens have and is underpriced on this slate.

The Vikings’ defense is horrendous. The Vikings offense also tried, and failed miserably, to fit a square peg into a round hole in their embarrassing 41-17 loss to the Packers last week.

Green Bay is a pure run funnel defense, and Minnesota only gave Dalvin Cook nine carries and two passing targets on the day. Minnesota can improve their playoff seeding as NFC North champs with a win over the lowly Bears this week.

Play the Vikings DST because the Bears are starting the infamous Nathan Peterman at QB. You know, the guy who threw five interceptions in one half of football.  Cook is overdue for one of his monster slate-breaking games, and the Bears are second-worst at defending the RB position.

Najee Harris is a fine play in DFS, but for GPP tournaments, I prefer his rookie backup from Oklahoma State, Jaylen Warren. The Steelers will need both of their RBs to have strong showings against the Browns on Sunday to keep Mike Tomlin’s amazing winning seasons’ streak (and their playoff hopes) alive.

Cleveland is 27th versus opposing RBs, so it’s no mystery why Najee will be a chalky mess at his $6,100 salary. Warren catches more passes and has been more of a big-play threat than Harris this season. Obscure rookies have won me a lot of money in DFS over the years in the final week of the regular season. I’m going to keep rolling the dice.

Jalen Hurts’ status for Sunday afternoon is trending upward. I won’t have any hesitation in plugging Gardner Minshew in this stack if Hurts is out again. My hope is that many DFS managers will steer clear of Hurts in his first game action in weeks.

This would provide us with immense leverage on the field. AJ Brown has been awesome but outshined in the past few games by DeVonta Smith. He still provides us with massive upside on a weekly basis, especially if Hurts is back under center.

Philly merely needs to beat the Giants to lock down the top seed in the NFC. This would give them home-field throughout and a first-round bye. An Eagles loss and a Cowboys win casts the Birds all the way down to the 5-seed to play a road game at Tampa Bay next week. I think Hurts plays.