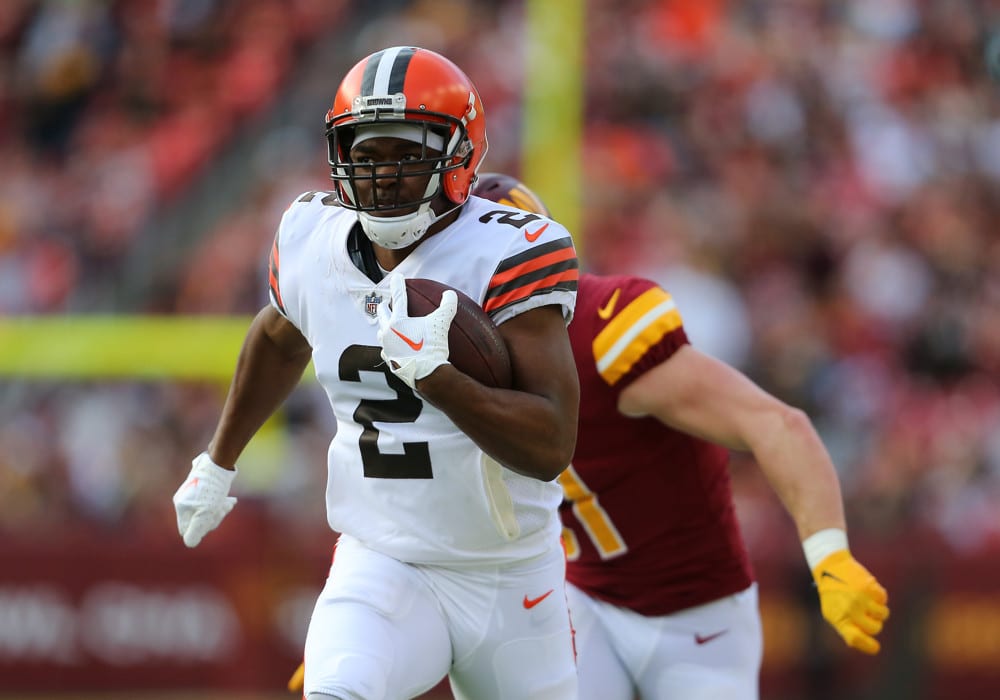 In this article I will feature positional values, stacking options, and games to target. Below each player are additional stacking options for that player, the defense they’re playing that week, as well as that defenses’ rank against the player’s position (fantasy points).

Thanks for checking out another SGPN Battle Royale article Week 18 edition. Good luck this weekend in your DFS slates and in your fantasy football playoff matchups.

As of writing this, the Bills/Bengals game is still up in the air but we have already been told that the Buffalo vs New England matchup will go on as scheduled. No matter what the Bills will be playing their starters as they need a win to stay alive for the 1 seed in the AFC. Josh Allen is an obvious choice for the top Quarterback spot with over 40+ rushing yards in seven of nine games.

Joe Burrow has emerged as an elite fantasy Quarterback this season and unlike others, most of his production comes exclusively through the air. The Bengals are up to 4th in pass plays per game in 2022 as this was a problem for Burrow’s production in the past. Pay close attention to the playoff implications as it remains to be seen if the Bengals will have something to play for in this game.

Prior to missing the last two games, Jalen Hurts had finished as the QB1 or QB2 in four straight games. The Eagles have to win to hold on to the number 1 seed in the NFC playoff picture and Hurts is expected to play this week. He’s averaged over 66 rushing yards over his last five games and potential rust is the only thing keeping him from the number one spot in these rankings.

George Kittle has emerged as a favorite target for Brock Purdy. He has finished as a TE1 in three straight games and has 5 touchdowns over that span. He should be treated as the TE2 in fantasy right now and there is no Travis Kelce in this slate of games. The 49ers are still alive for the 1 seed in the NFC which will keep their starters on the field.

After a rough second half of the season, Mark Andrews finally had a breakout game. He caught all 9 of his targets for 100 yards. Andrews hadn’t had over four receptions in five games so it was a welcome sight for fantasy managers. He will be a boom/bust option in Week 18 which is just fine in a large entry tournament like this one at his price.

T.J. Hockenson has emerged as a favorite target of Kirk Cousins with 28 targets over the last two weeks. He is second among all Tight Ends in targets in 2022 as well. However, the Vikings won’t have much to play for this Sunday and his role could be limited. I’m limiting my exposure this weekend as a result.

Dalton Schultz has been up and down fantasy-wise this season but he is as reliable as any Tight End outside the elite tier. He’s coming off a fantastic game and the Cowboys are also still alive for the number one seed in the NFC. This is a great value late in drafts, particularly with a lot of teams not playing their starters.

It shouldn’t actually be a surprise Cam Aker’s dramatic improvement these last few games. He suffered a torn Achilles just 18 months ago. Akers should just now be beginning to regain his former explosion and burst. He has 380 rushing yards over the last few games and will be motivated to cement himself as the lead back going into 2023.

James Conner is ninth in 2022 in opportunity share among Running Backs and that has only gone up in recent weeks. Colt McCoy will miss yet another game though so Conner might not get that many snaps if the Cardinals’ offense struggles. Nonetheless, any Running Back who’s likely to get 20 touches has value at this point in drafts.

Rhamondre Stevenson’s play has leveled off recently after a strong first 12 weeks of the season. He’s finished outside the top 40 Running Backs three times in his last five games. Furthermore, to make matters worse he had just a 57% snap share last week with Damien Harris returning to the lineup. His ADP is justified, but his role in the passing game gives him top 5 upside.

Tony Pollard is your injury discount of the week and he’s put in full practices the last couple of days. He’s expected to play, but his role might be reduced as he returns to full strength. He’s a risk but one I’m fine taking in a limited number of drafts this weekend.

Kenneth Walker has 49 rushing attempts over the last two weeks and is finishing the season strong after a small lull in production. He’s seventh in breakaway run rate as well and the Rams have been poor against Running Backs as of late. The Seahawks are another team fighting for a playoff spot and will be playing their full complement of players.

Prior to last week, Keenan Allen had 51 targets over a four-game stretch. The problem is he had only 1 touchdown over that span as well. The Charger offense just hasn’t been the same this season but Allen has one of the safest target floors in the NFL. Denver has a great defense, but they don’t have much to play for this Sunday and are likely looking forward to the off-season.

Despite missing nearly 4 weeks of the NFL season, Chris Godwin is 10th in targets among Wide Receivers. He is also 14th in red zone targets, but has managed just three touchdowns this season. The Buccanneers’ offense is another one that just hasn’t clicked, however, Godwin has been their most consistent producer.

Amari Cooper has been the definition of boom and bust this year but he finally had a breakout game with Deshaun Watson last week. His targets have been consistent though as he has a 27% target share on the season. While the Browns are out of the playoff picture, Watson and Cooper will be motivated to build on their chemistry going into 2023.

DJ Moore has turned a corner in the last few games and his current Week 18 Underdog Battle Royale ADP doesn’t reflect that. He has finished as a top-16 fantasy Wide Receiver in four of his past five games. Sam Darnold taking over has done wonders for his fantasy production and he should be a strong WR2.

Prior to last week’s explosion, Mike Evans had finished as a top 24 fantasy Wide Receiver just four times. The Buccanneers are locked into the 4 seed so it remains to be seen exactly how much time their starters see. Nonetheless, Evans has touchdown upside against a poor Atlanta pass defense.